Xiaomi is preparing to present a new range of quality/price Android smartphones. In fact, the Xiaomi Redmi Note 11T will debut on May 24 in China. Later it will also reach Europe and, therefore, the national market.

We already have new information about the top-of-the-range model of this new series of Xiaomi mobiles, the Redmi Note 11T Pro Plus which, despite having an LCD screen, will surprise you with its quality. In fact, who says it is the entity itself. screen mate. 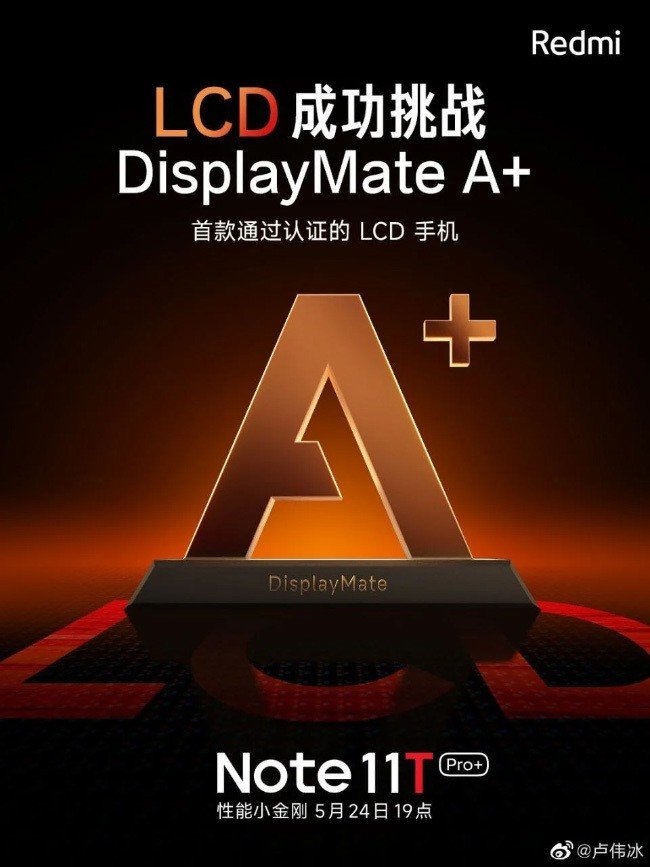 DisplayMate is the reference entity in the analysis and evaluation of screens, just as DxOMark is the authority when it comes to cameras and image sensors. Thus, seeing the Redmi Note 11T Pro Plus receiving an A+ rating with an IPS LCD screen is somewhat surprising and bodes well for the smartphone.

The first LCD smartphone to receive an A+ rating from DisplayMate

Naturally, this distinction was a source of joy for the managers of the brand. In fact, we see the head of Redmi, Lu Weibing, posting the image above on the Chinese social network Weibo. It is, so far, one of the best promises of the new generation of profitable Android smartphones. 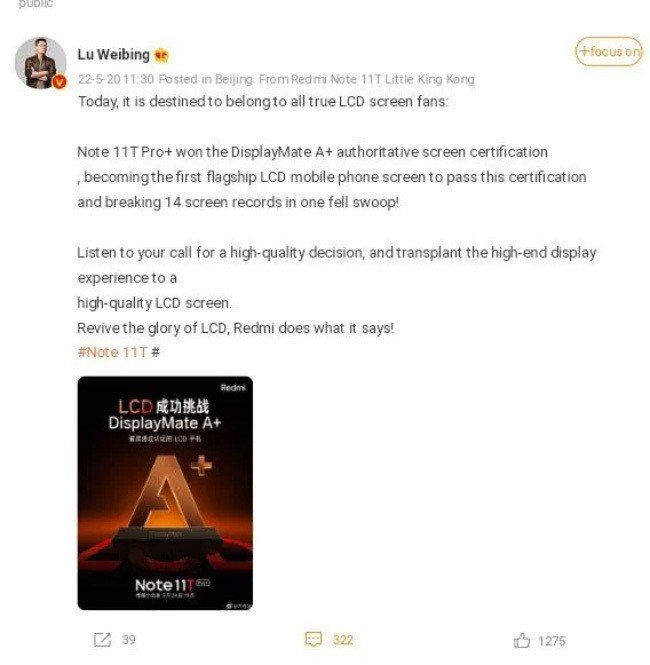 In addition to the aforementioned note of excellence, Weibing also mentions that the mobile also broke other records in terms of screen quality. We remind you that these distinctions apply to the most daring of the upcoming models, the Xiaomi Redmi Note 11T Pro+ (Plus). That is, the most expensive model of the next range of mobile devices.

For the top-of-the-range model we will have a 6.6-inch diagonal screen, IPS LCD technology with a high refresh rate at 144 Hz, in addition to the 20.5: 9 format. It will have a Full-HD + resolution, without the maximum brightness value being known at the moment.

For this phone we will also have the MediaTek Dimensity 8100 processor, a 5,000 mAh capacity battery and 120 W fast charging. In addition, we have 8 GB of RAM, 128 GB of internal storage in the base version.

Finally, the top-of-the-range version can reach 512 GB of storage, with Google’s Android 12 operating system, as well as Xiaomi’s own MIUI 13 interface. Now, we can only wait for its official presentation next week.