As we announced today, Xiaomi will present its new smart bracelet on May 24. The event will take place in China, and the company’s new bracelet is one of the most anticipated announcements by fans of the brand.

After the confirmation of this event, an image appeared revealing the price of the Xiaomi Mi Band 7. The value presented is for the model with NFC with the expectation that the normal version will be a little cheaper. 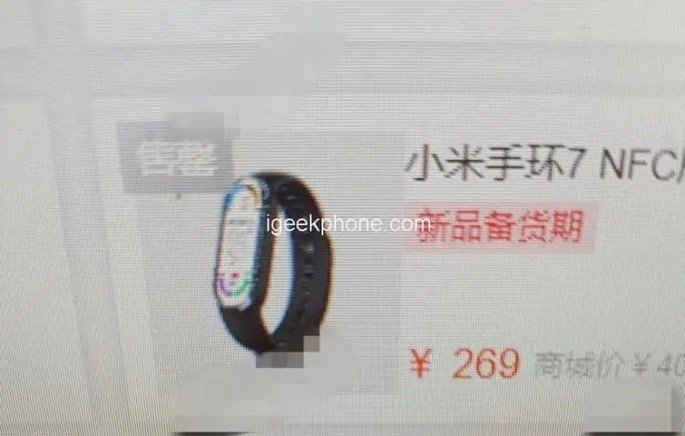 The Xiaomi Mi Band 7 should be around €40

Making a direct conversion of the presented value, the Xiaomi Mi Band 7 will be revealed with an approximate price of 40 dollars. This value should translate to around €40 once it hits the European market.

This is good news for anyone waiting for the next generation of this successful device. We are talking about values ​​similar to those practiced by the model currently on the market, that is, the Mi Band 6.

If the values ​​now revealed are confirmed, Xiaomi will be able to improve the performance of its bracelet without sacrificing its price. The Mi Band 7 is said to come with built-in GPS connectivity and an even bigger screen.

Such additions can translate into a higher selling price. This possibility should not be ruled out, even though preliminary references do not reflect this scenario.

According to rumors, the Xiaomi Mi Band 7 will be revealed with a 1.56-inch AMOLED screen with a resolution of 490 x 192 pixels. Another novelty will be the presence of the always-on screen functionality to show the time and other information.

As always, the Xiaomi Mi Band 7 will be designed to monitor the sports activity and health of its users. In addition to support for various sports, measurement of blood oxygen saturation (SpO2), heart rate and sleep monitoring are expected.

The inclusion of its own GPS will be a particularly welcome addition for those who enjoy running outdoors. In this way, the Mi Band 7 will be able to offer more precise metrics of your workouts.

Finally, everything points to the presence of a 250 mAh battery. Although no values ​​have been provided for its autonomy, it should be enough for several days of continuous use.