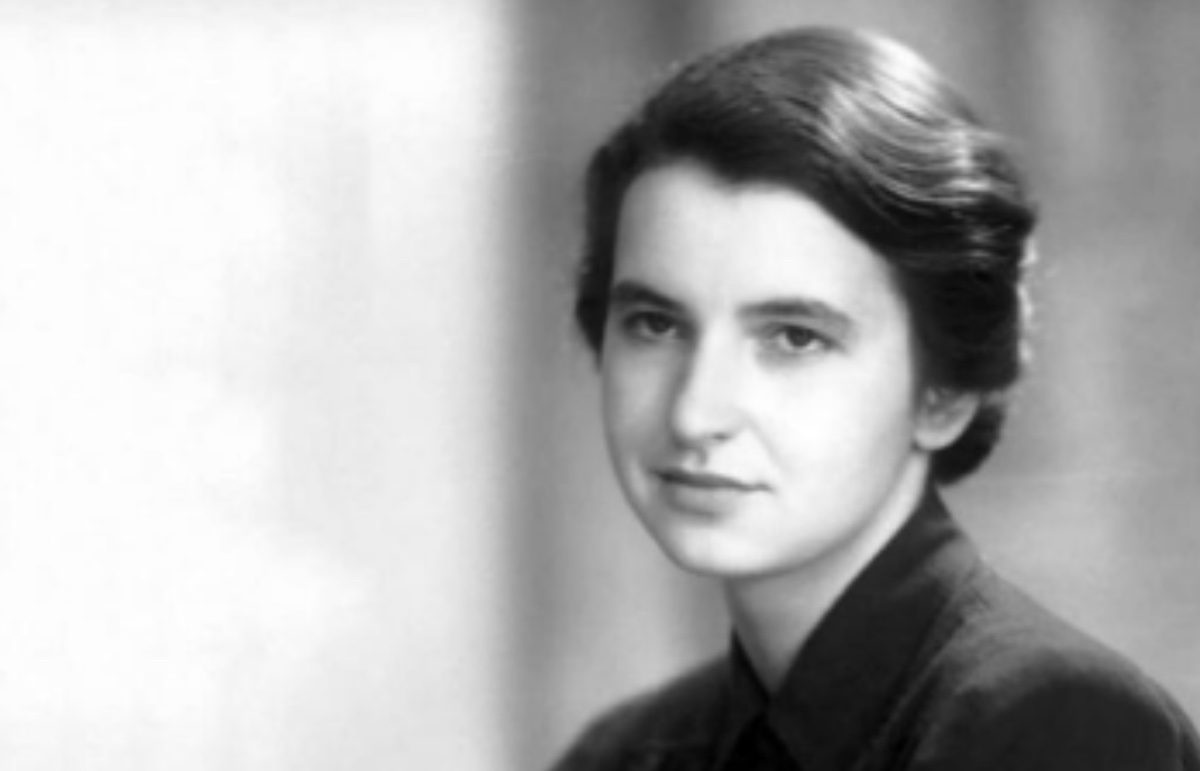 The X-ray work of Rosalind Franklin, the Missing Lady of Science, was instrumental in discovering the structure of DNA, but she was never recognized in her lifetime.

Born in 1920 into a wealthy Jewish family, from an early age she showed an aptitude and attitude to study, excelling in science. When the time came, after his studies at Nordland Place and St. Paul Girls School, she passed the entrance exam at Newnham College located in Cambridge. This Faculty was characterized by being purely female, where any woman who wanted to pursue university studies could do so.

This series of consecutive events generated conflicting opinions in her family: on the one hand, her conservative father did not look favorably on his daughter who was studying at the University, where, at that time, the presence of women in the classrooms of the University was not common. university . However, she received support from her mother, encouraging her to pursue what she was struggling with. This act of bravery paid off in 1941, the year Rosalind Franklin officially graduated in Chemistry.

When Rosalind finishes her university period, the United Kingdom was involved in the Second World War. She obtained an assistantship in a large British organization dedicated to the investigation of coal and its derivatives, which were later used to manufacture gas masks. At the same time, she was preparing and completing her doctorate, until, in 1945, she received the title of Doctor in Physical Chemistry with the thesis “The physical chemistry of solid organic colloids with special reference to carbon”. This work provided him with the foundation and confidence in publishing his later articles.

Her publications open up new possibilities for her studies: just a year after graduating, she travels to France on the recommendation of Adrienne Weill, a student of Marie Curie, to work as a postdoctoral fellow at the Central Laboratory of State Chemical Services in Paris. . In it, he learns new innovative techniques for the time, especially X-ray diffraction, which he pioneered, in addition to meeting William Bragg Jr. and Max Perutz, both known for their studies and demonstrations in crystallography.

X-ray diffraction consists of the interaction of an X-ray beam at a certain wavelength with a crystalline substance, where each substance produces its own diffraction pattern or footprint. This technique was perfected by Rosalind and was a turning point in 20th century science and the scientific studies that Franklin and many other scientists would later carry out.

Rosalind remained in Paris under the tutelage of Bragg and Perutz until 1951 and, during these years, published numerous works, in which we can highlight “The interpretation of carbon diffuse X-ray diagrams” and “Acta Crystallographica”, both published in 1950.

After gaining experience in Paris, he returns to Great Britain, where he receives a three-year scholarship to a post at King’s College, University of London. There he meets John Randall, inventor of the magnetron, as well as Maurice Wilkins, graduate and doctor of physics, with whom he joins in research on deoxyribonucleic acid or DNA.

In the first half of the century, there were three major research groups in the world studying what would be recognized as the greatest research milestone of the second half of the 20th century, the DNA molecule: Rosalind Franklin and Maurice Wilkins of King’s College; on the other hand, Linus Pauling, from the California Institute of Technology, United States; and finally James Watson and Francis Crick, molecular biologists, at the Cavendish Laboratory in Cambridge.

This last laboratory was distinguished by the participation of great previous scientists such as Thompson, father and son, in addition to Maxwell and Rutherford. Its popularity made it a very prestigious scientific experimentation space in Cambridge.

As a pioneer and expert in the X-ray technique, Rosalind Franklin improved on research already carried out by Wilkins before she joined the team. In them, he certified the existence of two different states of DNA: the state he called A was a dehydrated state, while the B state was hydrated. The relationship between Franklin and Wilkins was so bad that each of them went about their work separately with a different state of DNA: Franklin would assume the A form, while Wilkins would study the B form.

For his part, Pauling carried out a physical model in which he described the way in which proteins were folded into their secondary structure. This study was initially accepted because it needed mathematical support and images to confirm the theory. Pauling later confirmed this with several crystallographic studies, which years later won him the Nobel Prize in Chemistry.

At the same time, Watson and Crick, from the Cavendish Laboratory, both biologists, were aware of the importance that knowledge of the structure of DNA had in genetics, but they needed to rely on solid evidence, such as crystallography studies of this molecule. Here Franklin’s recognized expertise in this field finally came into play.

A few years later, Wilkins takes the first photograph of DNA in the B form, which could suggest an unconfirmed helical structure due to the confusion produced by the photograph itself. Rosalind doubted an identical structure in the case of A-form DNA, but later, in May 1952, with the help of her knowledge of X-ray crystallography, she obtained a sharp image that revealed the B-form of DNA: an unmistakable structure. helical, which was called “Photo 51”. 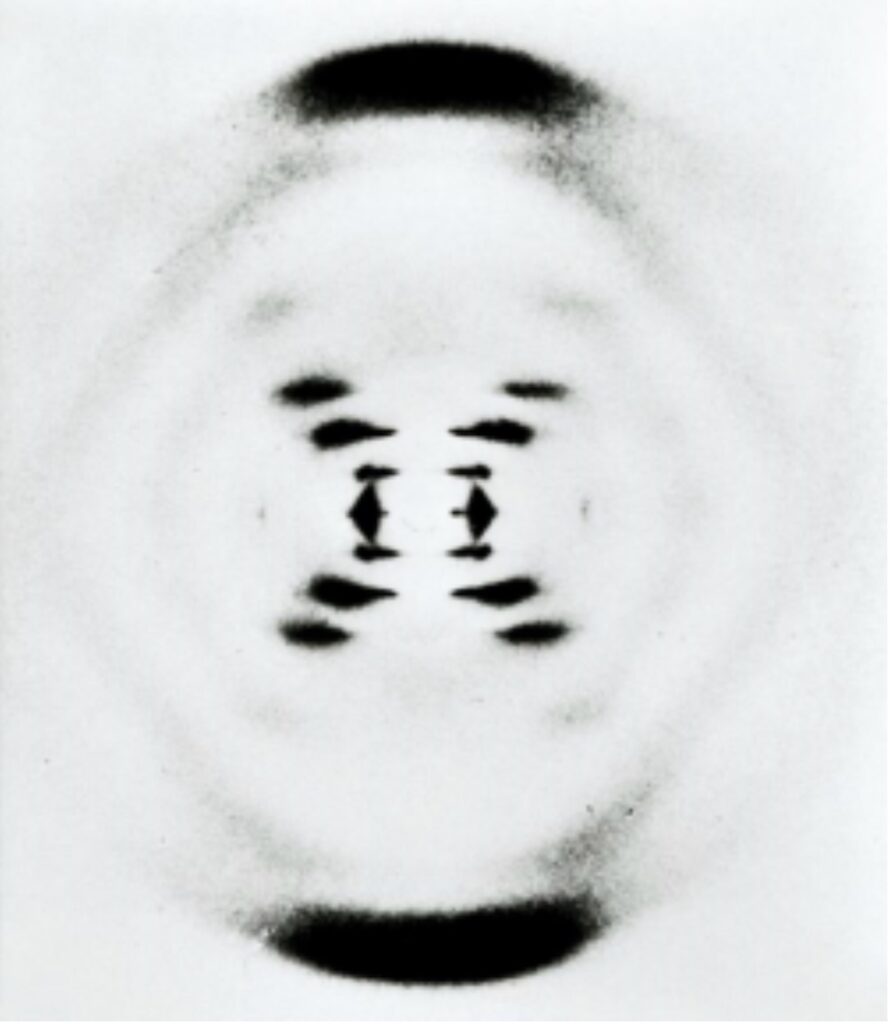 This important discovery was not immediate. Rosalind did not interpret or study the discovery that would lead science to make history. It was Watson, visiting the King’s College laboratory, to whom Wilkins showed his partner’s discovery.

That photograph was the last piece Watson and Crick needed to put all the pieces of the puzzle together.
DNA structure puzzle. This photograph, as well as studies, data and speculations by previous scientists, guided them through the physical three-dimensional construction of the structure of DNA to see how it worked. All of this was done without Rosalind’s consent or knowledge. 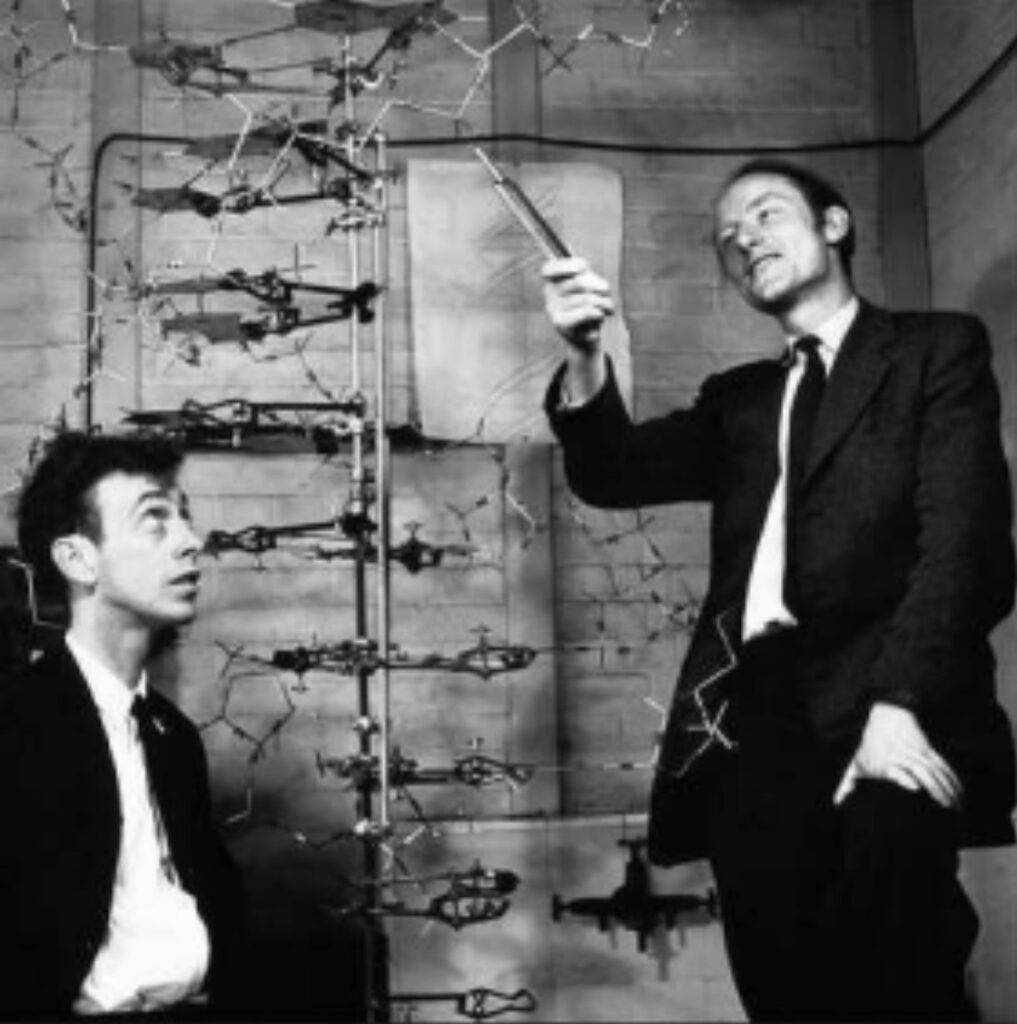 Watson and Crick with their 3D model of the helical structure of DNA.

Simultaneously, Rosalind Franklin focuses on that photograph that so little caught her attention at the time. The image proved how the two forms of DNA, A and B, were formed by a double helix. 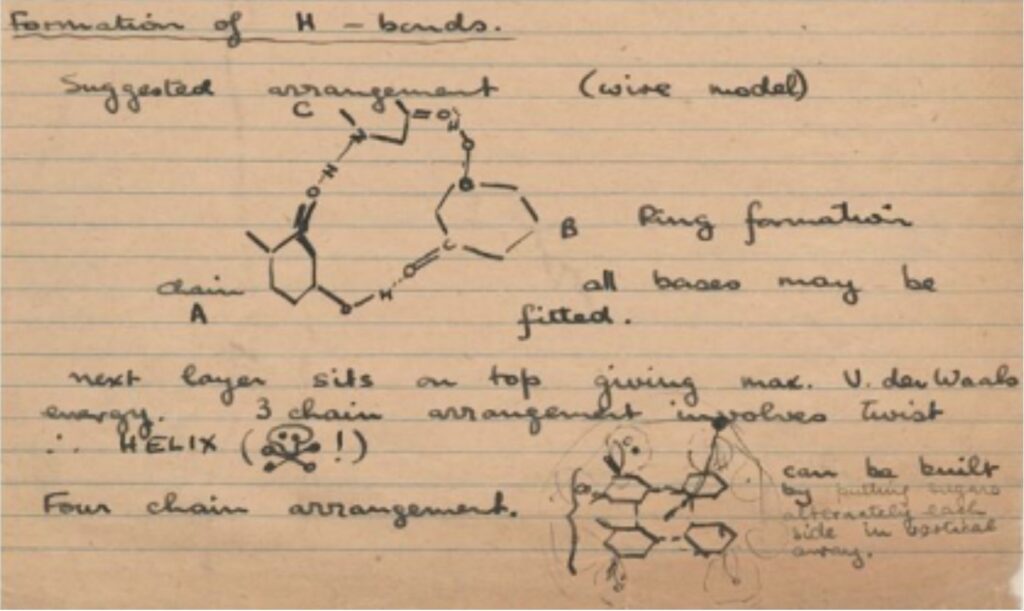 Franklin’s Notes on the Structure of DNA.

This discovery led him to write three works, in which “Crystallographica” stands out in 1953, not only for the explanation and interpretation of its discovery, but also for its publication the day before Watson and Crick completed their DNA model, in which would fit all the pieces, publishing articles like “General Implications of the Structure of Deoxyribonucleic Acid” explaining what would be one of the greatest scientific discoveries in history.

Although Rosalind Franklin’s indirect participation in the discovery of DNA is mentioned, in quotation marks, in these articles, she was not aware that Watson and Crick had access to her studies and collected DNA data through their own colleague. , despite the publication of the book, and due to ignorance of her contribution to the discovery, she assumed the secondary role.

Some time later, Rosalind Freanklin left King’s College to move to Birbeck College, where she made great discoveries like viral RNA as well as its structure, parameters and many other contributions, which made her one of the longest-serving scientists. Years later, she works with Klug, the future Nobel Prize in Chemistry, where, thanks to her discoveries in electronic crystallography, she publishes numerous works related to the tobacco mosaic virus.

It wasn’t until 1958 when the research and work done over the years when exposed to X-rays produced their inevitable effects on the human body. As a young man, he died of cancer, leaving a number of papers and works unfinished, unaware that his DNA research would be so relevant to science today and its later history.

In 1962 Watson, Crick and Wilkins were awarded the Nobel Prize in Medicine or Physiological Sciences for their discoveries about the molecular structure of nucleic acids and their importance for the transfer of information in living material. When receiving the important award, they do not mention the work done by Franklin, nor his fundamental role in the investigation of the structure of DNA.

This omission gave rise to a great controversy in the scientific world. Years later, the three men admitted that without the X-ray pioneer’s help, their discovery would not have been possible.

Over time, books were published telling the story of the woman who provided the key to a puzzle that was worked around the clock. Among them stands out “Rosalind Franklin; The Dark Lady of DNA” by Brenda Maddox and “The Third Man in the Double Helix” by Wilkins.

Because of this, the young Rosalind Franklin, who provides irrefutable proof of the helical structure of DNA with X-ray Photograph 51, is nicknamed the Missing Lady.

“Science and life cannot and must not be separated. For me, science gives a partial explanation of life. As it stands it is based on facts, experiences and experiments… I agree that faith is fundamental to success in life, but I don’t accept your definition of faith, the belief that there is life after death. In my opinion, the only thing faith needs is the conviction that, by striving to do the best we can, we will get closer to success, and that the success of our purposes, the betterment of humanity today and in the future, worth achieving.” Rosalind Franklin, 1940

The World Bank alerts to a debt crisis in developing countries

Deserved victory for Anaitasuna on their visit to Logroño