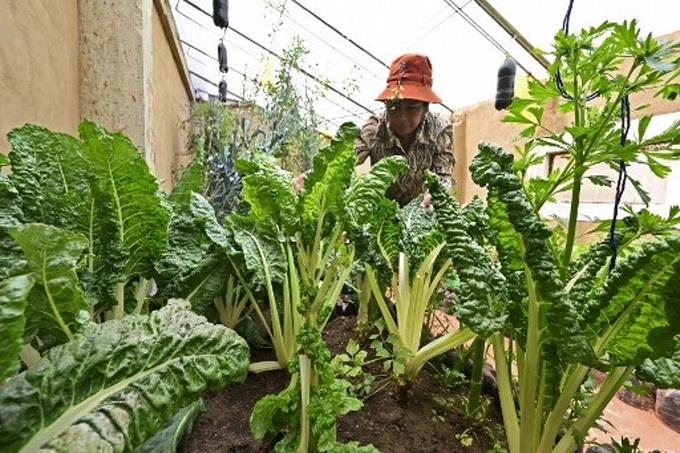 Some 4,000 meters above sea level, in the populous city of El Alto, in the Bolivian Andes, urban ecological gardens promote food security and the environment and are empowering poor women.

In this city of 1.1 million inhabitants and a strong Aymara migration, hundreds of women grow vegetables, fruits, aromatic and medicinal plants in their backyards. Everything is organic and for family consumption.

Inside a greenhouse measuring just 3.5 by 6 meters is Martha Ticollano, a 48-year-old housewife, short in stature but gigantic when it comes to explaining to AFP what she sows and reaps.

"Here I have celery, chard, huacataya [hierba aromática], cabbage, beets, radish. Here there are zucchini, there are also cucumbers… even carrots"He has a smile that lights up his face.

Ticollano, who wears the typical Aymara women’s skirt and covers her head with a wool cap, plucks some celery and chard leaves that she will use for lunch at noon for her five children, while she takes the opportunity to clean the grass in the area.

Under the powerful sun of the Andean highlands, she is moved to tears when she thanks the Community and Axión Foundation, which has helped her build her garden.

This NGO, which has been promoting the social development of El Alto for more than 15 years, claims to have launched some 500 urban organic gardens since 2008, of which 400 are still operating.

He affirms that each one produces, on average, 25 varieties of vegetables, two fruit trees and 12 types of ornamental and medicinal plants. And they not only bring new green areas to the city, but also activate biodiversity with insects and birds.

A neighbor of Ticollano, Ana Muñoz sows, in addition to vegetables and legumes, medicinal herbs.

This 68-year-old housewife uses rosemary leaves to wash her hair. "I was running out of hair"says about this plant that it would have effects against alopecia.

To "the stomach ache, [usamos] chamomile" Y "when we have a cold, we do [infusiones] chamomile and rosemary"Explain.

Oscar Rea, director of the Community and Axión Foundation, which channels aid to families with funds from town halls and municipalities in Spain, told AFP that to date family gardens cover some 10,000 square meters of cultivated area.

He points out that the condition for providing assistance is that they be poor families and of at least five people, and stresses that domestic crops are "organic"since chemical fertilizers are not used: families usually use ground coffee residues and egg shells as fertilizer.

The project in El Alto is aimed at self-consumption, to improve the quality of food, emphasizes Rea.

Ticollano, Muñoz and Limachi agree that their habits have changed and now they prioritize the consumption of what comes from their orchards, to the detriment of beef or tubers, such as potatoes, "chuño" (dehydrated potato) and the oca.

"I did not know the salad"says Ticollano, who used to eat "egg with potato, with chuño" and meat, but "not anymore".

Muñoz indicates that consuming what it produces is better than eating meat, because in addition "It’s very expensive". For example, a kilogram of beef costs 45 Bolivian pesos, about 6.4 dollars, in a country where the minimum wage is about 320 dollars, but there is a high percentage of the informal economy.

Rea highlights other benefits of this initiative.

The orchard has allowed "family unification"because everyone is involved in the crops, he explains.

In addition, many of the women who run these orchards "feel economic independence" with respect to their partners, on whom they no longer depend for food from their environment.

About 70 to 80% of urban organic gardens are run by housewives, Rea points out, and it is they who, knowing what food the family needs, decide what should be planted and harvested.

"Here there is an empowerment of the woman, the woman empowers herself, because she already has the ability to sustain herself"says Victoria Mamani, one of the pioneers of the project who now works at the Foundation.

And adds: "They are already capable of generating their own income, because, as can be seen, food comes first for a mother of a family".

Did Amrita Arora wear a cheap bottom bought from the Bandra store? You will laugh after hearing the price!