Last week it came to light that AMD’s Ryzen processors do not perform optimally in Windows 11: due to the higher latency of the L3 cache and the wrong choice of the faster CPU core, the gaming performance drops by as much as 15% compared to Windows 10. on the arrival of several fixes, which are expected over the course of the next week.

Meanwhile, TechPowerUp has determined that L3 latency on Ryzen chips has increased further after the first Windows 11 Patch Tuesday (every second Tuesday of the month). Where the website reports a typical latency of 10 nanoseconds for the Ryzen 7 2700X, this is 17.1 ns on Windows 11. However, after this week’s update, the value has increased further to 31.9 ns. 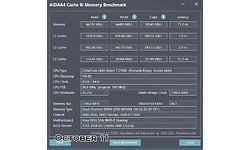 TPU has not released any other benchmarks, although the performance of games and other latency-sensitive applications is more likely to be adversely affected. So it doesn’t seem like a bad idea to use this patch (KB5006674) and wait for the updates mentioned above, which should fix the issues.