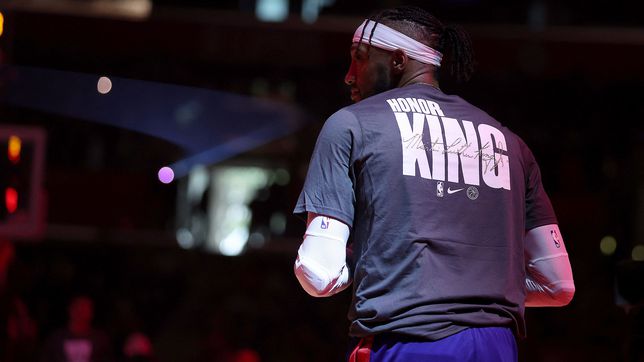 The third Monday of each January commemorates the Dr. Martin Luther King Jr., promoter of civil equality in the USA, and the nba joins the festivities with a long day in which there will be nine games starting at 1:00 p.m. Eastern time.

Luther King Jr. noted the differences between the treatment of people of color and white Americans; for the community was – and continues to be – victim of racial segregation and violence. Thanks to his fight for the community, various laws were created to protect African Americans, and fight discrimination, such as the Civil Rights Act of 1964.

During his fight for civil rights, Martin was the victim of various attacksuntil he was murdered in 1968. The activist lost his life. after being shot in Memphis, where he was about to participate in a strike.

In 1983, the then President Ronald Regan enacted the third Monday in January as Martin Luther King Day Jr due to the birth of the activist leader (January 15).

The MLK Day of the NBA will begin with the duel between the Charlotte Hornets vs. boston celtics, followed by the Milwaukee Bucks vs. Indiana Pacers, Cleveland Cavaliers vs. New Orleans Pelicans, New York Knicks vs. Toronto Raptors, Washington Wizards vs. Golden State Warriors.

The Atlanta Hawks will host the Miami Heat with a special uniform in honor of Dr. King at 15:30 ET. Half an hour later the duel between the Minnesota Timberwolves and the Utah Jazz will begin. The city of Memphis is special to the memory of MLK and the Grizzlies will host the Phoenix Suns in the penultimate game of the day. The activity at MLK Day will end with the duel between the Los Angeles Lakers and the Houston Rockets in the crypto.com Arena at 22:30 ET.

IT MAY INTEREST YOU: G League player will participate in Slam Dunk Contest

Being a special day for the basketball community in the United States, the records on MLK Day are special.

Months before the coronavirus pandemic brought the world to a standstillDamian Lillard scored 61 points against the Golden State Warriors on MLK Day 2020. The point guard hit 17 of 37 shots, with 11 triples. and he guided the Trail Blazers to a 129-124 victory by scoring seven of his team’s last 11 points.

The team that has played the most games on MLK Day is the Knicks, with 36 appearances in 37 years since the NBA celebrated this day. In second place, the Lakers and the 76ers are tied.

The franchise with the best winning percentage on MLK Day is the Warriors, as they have won 20 of 29 (.690) games played on the third Monday in January. Close behind are the Hawks with 21 of 31 (.677)