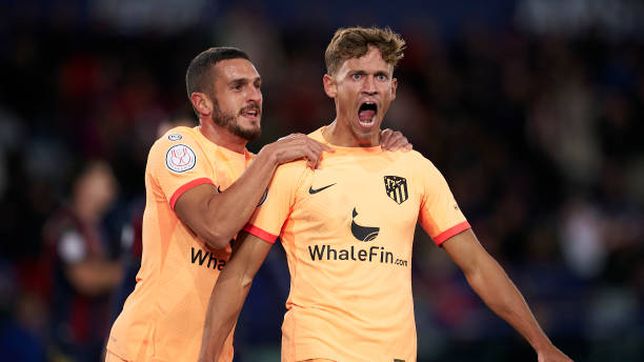 When the match ended, Atleti left Levante behind. The Ciutat had fallen and they continued ahead in this Cup that quenches the thirst of this arid and desert season at the moment. Still, Simeone had come out again. With everything he has at the moment, of course: Morata woke up while Memphis landed. Or rather Llorente and Correa woke him up, all spark and drive, to pull the team while cThere was that curse with all its Mondays, traffic jams and rain without an umbrella. It was much more difficult than the scoreboard says. Very much. With Calleja on their bench, Levante feels tall, handsome and strong. And he immediately let Atleti know.

No matter how much Simeone looks for the click that scares away the emaciated gesture of this Atleti Nothing works for someone who has abandoned football a long time ago. Or little. Neither the new pieces (De Paul or Savic) nor a new order, a 4-3-3 with Grizi as the midfielder and Llorente as a striker with Morata. If he intended to disturb and add occasions, nothing further. The assistant’s flag was raised to announce offside on the first ball that the Frenchman leaked to the last one and Atleti would die there for a long time. Very long, of the entire first part. And the fans with one eye there and the other on the airlift: let’s see if Memphis was there, it would come, it could play the second game of this game.

Levante’s first approach to Oblak was a cross that was poisoned to give the goalkeeper work. The rojiblancos saw it and began to tremble. They would raise a white flag, they would play infamous. They began their minutes that no, their minutes of nothing. He didn’t play, he just watched how Levante dominated him. A Levante that faced it for what it was, the door to the quarterfinals of this Cup. Among the rojiblancos nobody seemed to be aware. Nobody ran, nobody took risks, nobody tried anything. Faced with green traffic lights and the rival effort to lose one ball after anotherthe Levante went forward and set up camp at the feet of Oblak.

Pablo Martínez and not Barrios was the boy who came out of the Moratalaz Sports School who shone in the Ciutat. Together with Pepelu, he gave a masterclass on how to block and knock out rivals. De Paul, who was playing again a month after being proclaimed world champion with Argentina, He did it in his usual rojiblanco profile. The bad, the fail.

Corner to corner, with crosses into the area and possession, those of Calleja showed their teeth. On the pitch there was a Second team, yes, but they were not. His superiority would lead Bouldini to the scoreboard but Figueroa Vázquez would lower it: he whistled a foul in attack, in the granota jump with Oblak. Only when the break loomed did Atleti seem to open their eyes, breathe and realize where he was. The Ciutat, the Levant. And if they wanted to stay alive in the Cup, not give up like in Europe, they had to beat them. When the game returned, Barrios stayed in the booth and Correa appeared in his place. immediately it was noticed.

“I’m Mister Wolf and I solve problems,” he yelled to the others as he stepped onto the grass. No sooner said than done. The Argentine was revulsive and gasoline, the only world champion who, really, played for Atleti yesterday even though there were two others on the pitch. Ten minutes later Morata wiped the sweat from his forehead with a half smile: with his right he gave the first blow to Levante. He had only had to wait at the far post for a low cross from Llorente who walked past four rivals before reaching his boot and kicking without thinking. 0-1. And without flags in the air or offside. The play, by the way, was born in Correa.

While Calleja tried to fight fate with the changes, Cholo felt his belly full and he did his usual yenka backwards. He curled up again, leaving him the ball to a Levante who claimed a hand from Kondogbia in the area and did not turn his dominance into real danger. Llorente rounded off at the end. Atleti in the quarterfinals, Ciutat defeated and a warning to sailors: while Memphis arrives, Morata returns.