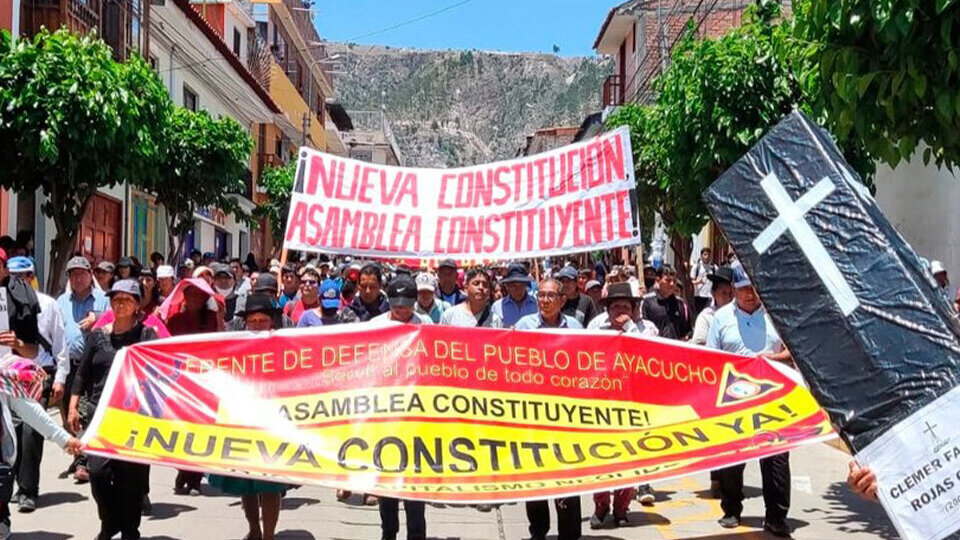 What ideal, brother Cámac, inspires our rulers and tyrants who consider cholos and Indians from the coast and the mountains as beasts, and look and listen, sometimes from afar and with disgust, their music and their dances in which our homeland expresses itself as it is in its greatness and tenderness?

“We must prevent the terrorists from reaching Lima,” leaders of the ruling party and the conservative press are heard saying. The “terrorists” are humble peasants and workers (like the domestic worker murdered in Puno) who feel cheated by Castillo’s “preventive” prison. In many Peruvian provinces, specialized human rights prosecutors have become anti-terrorism prosecutors. Sixty people have already been assassinated in Peru, all from humble sectors who came out to protest and demand the resignation of the president. The government has been indifferent to the chaos and has not said a single word. The governments of Latin America do not seem to realize the magnitude of the tragedy either. The police cut the roads so that the “cholos” (the Indians) cannot reach Lima. So they don’t “go down” to the city.

Since Castillo took office, a humble teacher, like those who today go out to protest in the south of the country, has been harassed by the media. As soon as the government took office, Castillo cut off the official advertisement in the Peruvian press. The hegemonic media (Group Trade, owner of Peru 21, either The Republic) stopped receiving funding. From that moment on, and in unison, all the media devoted themselves to attacking him without pause. No president in the history of Peru was requisitioned as many times as Castillo, none was asked to hand over the chambers of the Government Palace (Pizarro’s house) like Castillo. The Lima aristocracy, centralist and racist like few others, could not tolerate a rural teacher (a “cholo”) for president. This does not exempt Castillo from his mistakes (nor the internal defections that his cabinet has suffered, like that of Boluarte herself, who until yesterday was loyal and leftist and suddenly leads a murderous government). But he explains the reason for his dismissal. They are not his mistakes (no Peruvian president took any of his most important measures, as was the case with Lugo or Dilma Rouseff, both irregularly ousted and succeeded by corrupt rulers, who have persecuted the opposition, imprisoning Lula, for example) but his cultural identity that explains why Castillo is in prison today. And that identity, that marginality, is what explains the protests in the streets.

It is not uncommon to hear that in Peru Evo Morales is held responsible for the deaths. In Puno, the region where there were the most murders, they wanted to remove the rector of a public university that had recognized Evo Morales, who claims the Aymara nation, with an academic degree. Again, the problem is the “indians” (uneducated, with their unpleasant “stink” compared to the neat civilization that smells “good”, as Kusch ironically puts it in deep america) who come down from the hills and from the “young” towns (a euphemism used to avoid talking about shanty towns). Those who claim in Peru are impoverished peasants, students and workers, as in Arequipa, all from the northern, proletarian cone, from the wealthy city, whose historic center has not yet registered deaths, as if Puno or Ayacucho (a region famous for popular artists who are expressed through altarpieces), where the leftist movements come from. The Ayacucho altarpieces usually express combative movements. In Ayacucho there have been dozens of deaths. The police do not improvise. There are no deaths in Lima or Arequipa. The police know well where to go to kill.

While Peruvians are dying, the president is heard saying that it is time to face “the great reforms that the country needs.” The dead do not share her idea: they accuse her of usurping power and agreeing on her government with the most reactionary sectors of Lima, who are the ones who support her. The peasant towns, the high Andean women, demand something very different: a new constitution that finally expresses them. Let him recognize them.

Those in Congress demanding the deaths and calling for Boluarte’s resignation are branded, like Sigrid Bazán, “aggressors.” When the police themselves organize “marches for peace” in the wealthiest neighborhoods of Lima, after murdering sixty Peruvians without flinching, no one talks about “groomers.” There have been close range assassinations, breaking any “protocol”. There have been snipers in Puno. Videos of women can be seen screaming to stop shooting “You wretches, don’t shoot,” several women can be heard saying, between pleas and tears. The silence of Latin American progress is notable. This is not the time to be silent. In Brazil there was an attempted coup without deaths. In Peru there are already sixty dead as a result of an illegitimate dismissal and a de facto government that represses its people. The OAS has not been as hasty in this case as it has been in others.

Police can be seen surrounding buildings without a search warrant. Cultural events are suspended daily in which left-wing authors sing. The police “discover” books by Marx and Lenin in certain departments, using those books as “proof” of “terrorism”. Protests are delegitimized with the type of “riots”, many of them generated, as in the famous case of the assault on the nation’s bank (July 2000, in the march of the four of them, former division of the incanato), from the power itself: by the same police, to blur the peaceful but firm claim of the Peruvian people. This is how Fujimori’s genocidal dictatorship fell: when, after a march, it is proven that the burning of the nation’s bank was not caused by those who protested, but by infiltrators of the government itself. The similarities with the current situation are striking. The government tries to delegitimize the cholos by saying that they are “terrorists” but their demand is peaceful, although firm and clear: resignation of the government, new constitution, constituent assembly. Build a multi-ethnic nation, as in Bolivia and as requested in Chile (where the original peoples are also accused of being terrorists and not those who have historically murdered and displaced them from their land, preventing them from even speaking their language). That is the path of the brother nations of Latin America. The repressive reaction cannot be tolerated. The Peruvian brothers are assassinated. Our peoples are defending their dignity. They want to speak their language. They want constitutions that represent them. No (judges, leaders, or legislation) that repress them. They want something that our governments have failed to provide. That’s why they go out. when the hills come down is the title of a chicha song (When Chacalón sings, the hills go down) that expresses the soul of the Peruvian people. Like the indigenous novels of Arguedas or the poetry of Mariano Melgar (Peruvian poet and independentist, Arequipeño), the “cholos” are marking a path that even our centralist, racist, colonial and Eurocentric States cannot see. The social crisis is deeper than it seems. It is not “political” nor is it economic. It is a cultural claim of historically silenced and denied peoples who have resolved in Bolivia, Chile, or Peru, to go out into the streets. “Go down” from the hills.