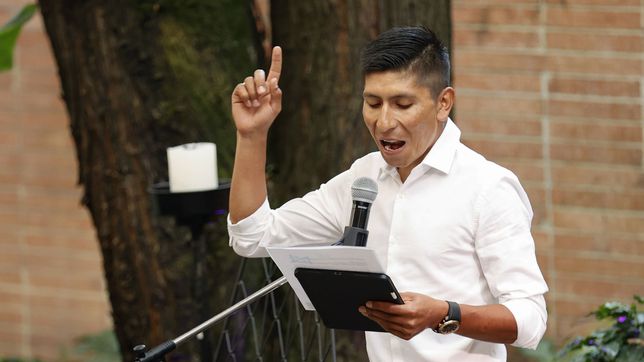 Nairo Alexander Quintana has not given up yet. The most winning cyclist in South America made it clear that he will continue on his “steel horse” to represent Colombia in the best way. Although he doesn’t have a team yet, he ruled that in the month of February he will travel to Europe to make “a direct bridge with the different teams and talk. Solve this pothole that we are going through and I hope to continue succeeding”.

Giving up is not an option for Nairo, the Colombian confirmed that he will continue to struggle to compete and while he continues his career as an athlete, he also does so as a businessman and training at an academic level. Close to turning 33, the runner continues to set an example and demonstrate that his physical form is maintained, so a World Tour team remains his main goal to participate in the biggest races in the world.

Travel to Europe to search for equipment

Nairo thanked all the squads in the country that have offered him a chance to join them. However, he is convinced that he still has the legs to compete with the best and that is why he will travel to try to sign for someone who is part of the first category of cycling.

He also ruled out his participation in the next National Route, despite the fact that he had been invited. “I have not planned it, I have gone through some health problems and for this championship I will not be prepared, I spoke with the president of the Federation, but I will not be there.” Hours later it was learned that he would have changed his mind and would be in the race.

“As I have said before, I thank the Colombian teams for giving me their hand. I think that I am still prepared to continue representing my country in the best races in the world. I am in a position to be hired by a team in the highest category and I am still preparing. I have to travel and sit down with them to talk about the future”, affirmed the Colombian.

In addition, he has maintained his rigor with training to continue at a good level. “My physical condition is very good. I have prepared myself, I have been rolling. In recent years we have seen the physical condition in the best races I was in the top 10. I am going to travel to Europe, I will make a direct bridge with the different teams and talk. Solve this bump that we are going through and I hope to continue succeeding ”, he concluded.