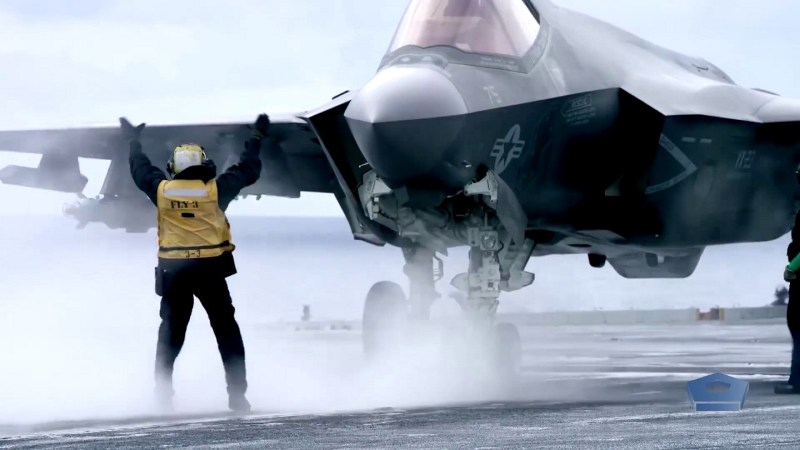 The naval forces of China and the United States are in a race these days to reach the F-35C, a US stealth fighter jet that has crashed into the sea.

The 35 100 million F-35C stealth plane crashed in the sea near southern China, but the pilot was rescued. The U.S. plane crashed while taking off from the USS Carl Vinson, an aircraft carrier. The fighter jet is the state-of-the-art aircraft of the US Navy and is equipped with secret equipment, which obviously the US does not want to fall into the hands of anyone else, but because the aircraft crashed in international waters According to him, whoever reaches it first, the victory will be his and the prize of winning will be the sensitive and latest technology in this aircraft which is not only very expensive but also equipped with the secrets hidden in the modern fighter aircraft.

The plane crashed during a crash landing on Carl Vinson, a U.S. aircraft carrier, during a combat exercise on January 24. The pilot’s life was saved, but seven crew members were injured. It is currently located in the depths of the South China Sea, but how to get it out is still a mystery.

The U.S. Navy has not yet confirmed where the plane landed and how long it will take to get it out.

China claims control of the entire South China Sea, and has taken a number of steps over the years to assert its monopoly.

China has refused to accept a ruling by an international tribunal in 2016 stating that China has no legal right to the South China Sea. National security experts say the Chinese military will “do its best” to reach the plane, while a US rescue ship will take 10 days to reach the crash site.

Defense analyst Abby Austin says it will be too late because the battery of the black box installed in the plane will run out before that and thus it will be difficult for him to reach the plane.

“It’s very important that the United States get this plane out of the sea successfully,” she said. The F35 is actually like a flying computer. It also allows you to link to other devices called “linking sensors and shooters” in Air Force terms. She says that China does not have this technology, so if it gets into their hands, it will be very beneficial for them.

“If they (China) manage to gain access to the F35’s networking capabilities, then the philosophy of aircraft carriers could be severely damaged,” she said.

Asked if the incident echoed the Cold War, he said: “It all depends on who is more powerful. The story is exactly like the movie The Hunt for Red Cross October and The Abs. It’s like a three-part drama.

Why is the F35C so special?

The aircraft has a network-driven mission system, which allows the information collected during the flight to be shared at the same time.

The US Navy’s first ‘less observable’ carrier-based aircraft that enables it to operate in enemy airspace without warning.

The aircraft’s large and powerful landing gear enables it to fly faster and faster than the navy.

The aircraft has the world’s most powerful fighter engine and can hit at speeds of up to 1,200 miles per hour.

The aircraft is capable of carrying two missiles and four missiles.

Abby Austin, a former adviser to the chairman of the US Joint Chiefs of Staff and a former senior diplomat to NATO and the European Union, has said he believes China’s attempt to claim rights to the ship would “put pressure on the United States.” Is an attempt.

Bryce Barros, a Chinese affairs analyst at the Truman Project, says there is no doubt that China wants to acquire the aircraft, although cyber espionage could mean that they already know something about its internal structure and function. Be aware

I think they would like to see the original parts of the aircraft so that they can better understand how it was built and what its weaknesses are.

The U.S. Navy has acknowledged in a statement that arrangements are being made to evacuate the F-35C that crashed on the USS Carl Vinson.

Mountaineers victims of a serac fall in Switzerland

The Ukrainian president once again addressed the international community

For the Taliban, nothing to worry about for women

Climate: the G7 undertakes to end fossil fuel subsidies abroad “by the end of 2022”