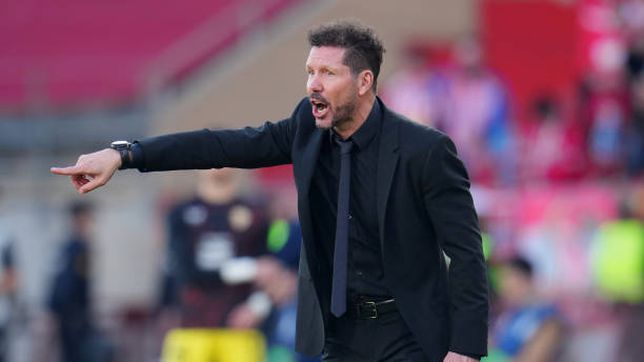 They go many weeks talking about lack of forcefulness.

I think we have to understand that the only way to find the goal is to get closer to what happened in the first 25 minutes of the game, where we won 1-0, we had Correa’s that is a little behind, Llorente scores but Kondogbia He ends up touching and generates the offside and in the second half we had very good, clear plays, with good arrivals, people who ran into space, saw the best placed teammate to score a goal. It was a great performance by Fernando, who played a brilliant game and we found ourselves with a tie that leaves us with the taste of having left us two points.

How can it be improved?

Continuing working, looking for the way to continue playing as we are doing, because the plays are becoming clearer, those of today even more than those of Barcelona and football are waves, there are times when you do not have the fortune to be fine in the face to goal, that the goalkeeper has a great performance and continue in this line. I have no doubt that the goal will come at the most important moment that we will have in the future.

Why was there so much system change?

We started very well, they changed, after 25 minutes they began to hurt Griezmann’s back, Koke’s, to get Witsel out of the way and we tried to reverse it. We were not concentrating on their goal, they take out the cross very easily and within the area they connect very easily, there it is not a matter of the system. At the break we talked to accommodate what was happening, we went back to the beginning, we did very well, we had chances to score, it started to be a two-way game, we made mistakes, we understood that it was better to ensure the defense with Felipe and Reguilón Stepping forward, we created chances again, but we couldn’t find the most important thing in this game, which is the goal.

Is it just a lack of goal problem?

The team game was good. With a good rhythm of play in almost all the players, we have the peace of mind that they are giving everything, since the post-World Cup the team has grown, has more speed, more goal situations, we lost against Barcelona, ​​today we drew, but I feel happy with what that we generate to win the games.

How do you explain this tie after starting out winning?

A game in which we started well in the first half, we scored, we had Correa’s play that he could not finish off, Llorente’s goal that Kondogbia touched and canceled it for being offside and they grew. They found that our inattention so that they connected to the first clear goal situation they had. In the second half we had to keep looking for goal situations, and to win you have to convert them. Fernando played a great game, Correa’s is very clear, Morata’s goes without saying, the next Morata’s is the same. Congratulate the goalkeeper, it was a two-way game where they were better because we were failing, we had the strength to attack, but we couldn’t be concrete in front of goal, Fernando put in a great performance and we hope the goals will come at some point, because they are coming

As against Barcelona, ​​he lacked effectiveness again. Why did the system change?

They were winning the back of Koke in the first half, we didn’t get to close, Baptistao kept Reinildo too long out of position and we understood that putting five back we could solve. We didn’t do it, we had situations to increase the advantage in the first half and in the second the team went through both systems again, we returned as we had started with chances to score and when Felipe came on to support his fast forwards on the inside. We did not score the goal of peace of mind and we handled the task of securing the goal well. We had chances, we did not specify, it will come, we are waiting for the goal, which will appear in some important game.

Was Koke’s change due to his back problems?

We understood that we occupied the space better to share the task in the middle. It was between 25, where they already had an exit on the outside and Wisel had to go behind Molina’s back. We changed immediately and in the second half we repeated as we started. It was a controlled match, then the important scoring chances appeared. The best of the game was their goalkeeper and we could not specify. We are closer to the goal, they were clearer chances than against Barcelona and we have to keep improving.

Griezmann has become a midfielder.

He always has a goal, wherever he plays. Now he is a bit far away, but when he has a goal inside he doesn’t forget it. He can spend a while without showing up, as he has already done at other times, but he always gives everything. He has scoring situations, he generates them, he sees that the team can attack well and we need him in the best way.

The dream ending in Benidorm

Hamamelis is an herb with cosmetic properties and much more.