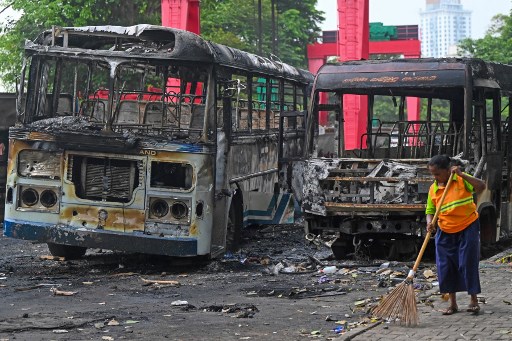 The economic crisis in Sri Lanka has turned violent. Angry miscreants set fire to the houses of several assembly members, including the family of the outgoing Prime Minister Raja Paksha.

According to foreign media, the assailants managed to enter the outer part of the Prime Minister’s residence, where they hurled petrol bombs, but in time the military

Attempts by miscreants to blockade the building were foiled during the operation. Meanwhile, a police officer was killed on the spot when a tear gas shell exploded.

The security official confirmed that Raja Paksha and his family had been evacuated from the building to an unknown location.

Sri Lanka’s economic crisis has been fueled by rising commodity prices and subsequent violent protests. Mahindra Raja Paksha resigned from his post on Monday as a result of violent protests by angry citizens, but the siege and violence of miscreants is still going on in which 7 people, including an MP, have been killed so far. ۔

The curfew was extended to Wednesday to prevent further deterioration of the situation. The curfew was imposed when footage of pro-government protesters armed with sticks was shown on a live television channel, beating protesters in several parts of the capital. Demanding resignation.

It is to be noted that President Gotabaya Raja is the brother of the outgoing Prime Minister Raja Paksha.

In the DRC, at least 27 civilians massacred in North Kivu