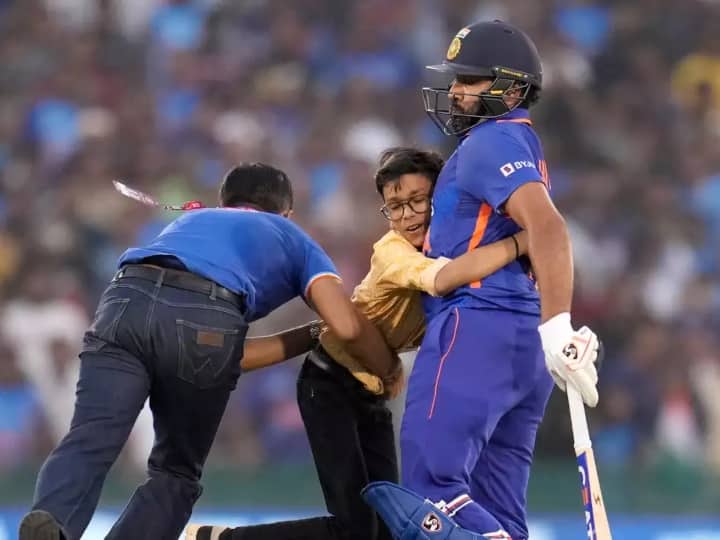 India defeated New Zealand by 8 wickets in the Raipur ODI. At the same time, a video of this match is becoming more and more viral on social media. Actually, the viral video on social media is during the Indian entries. A young fan reached into the ground to meet Rohit Sharma. At that time Rohit Sharma was batting and the Indian captain’s score was around 50. What was it then… Security guards ran behind to catch that fan. During that time, the young fan was dealt with strictly by security, but Rohit Sharma settled the matter easily.

The viral video on social media is from the 10th over of the Indian innings. Actually, when the security guard caught that fan and started behaving strictly, Rohit Sharma said that he is a boy, let him go… after which that young fan was pulled from the ground. However, the video is becoming more and more viral on social media. At the same time, fans are constantly praising Rohit Sharma. Social media users are constantly giving feedback on Rohit Sharma and appreciating the spirit of the Indian team captain.

On the other hand, speaking of this match, the India team defeated New Zealand by 8 wickets. In this way, the Indian team led by Rohit Sharma has cornered the series. In the second ODI, the Indian team had to score 109 runs to win. The India team chased down the target easily by losing just two wickets in just 20.1 overs. With this, India has also achieved an unbeatable 2-0 lead in the three-match series. Indian team captain Rohit Sharma said that the confidence of the team has increased a lot. He said that Mohammad Shami and Mohammad Siraj wanted to do a long spell, but I reminded them that the Test series against Australia must be played, this must always be taken into account. Other than this, I want to make changes to my game. Rohit Sharma said about his hitting that I know I can’t score much, but I’m not too worried about it.

Cardano stablecoin Djed will be launched next week