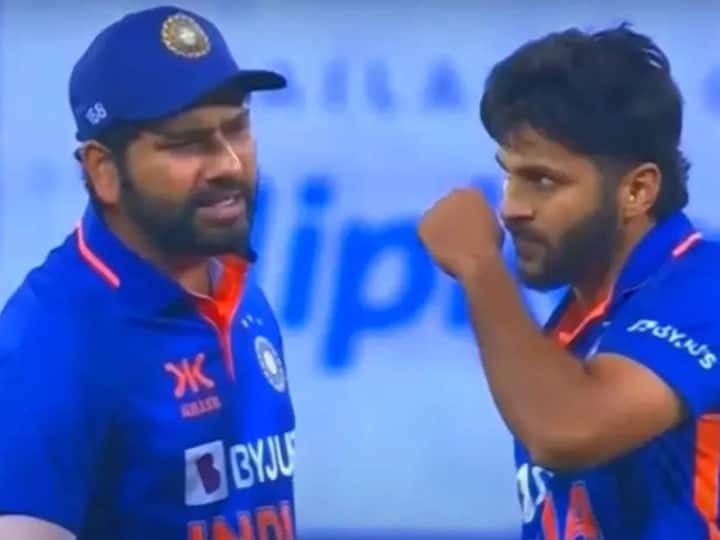 The third and final match of the ODI series between India and New Zealand was played in Indore. In this, Team India won by 90 runs. India scored 385 runs while batting first. In response, the New Zealand team made 295 runs. Shardul Thakur took 3 wickets in this match. After the match, a video of Shardul and Rohit Sharma is going viral. In this, Rohit is seen getting mad at her. Fans are giving different reactions about it.

In fact, in the Indore ODI against New Zealand, Rohit gave up 26 to Sharduk. He took two consecutive wickets on first and second balls while bowling dangerously. Shardul dismissed Mitchell at the first ball on the 26th. After this, Tom Latham was sent to the pavilion at the next ball. But Shardul missed the hat-trick. He hit two consecutive fours on the fifth and sixth balls of the same over. Devon Conway hit four. Meanwhile, Rohit was seen angrily explaining something to Shardul. The video of him is going quite viral on social media. Watching the video, it can be guessed that Rohit is unhappy about some mistake by Shardul.

Significantly, in the last match of the ODI series played in Indore, India scored 385 runs while batting first. During this, Rohit scored 101 runs off 85 balls. He hit 9 fours and 6 sixes. While Shubman Gill scored 112 runs off 78 balls. He made 13 fours and 5 sixes. Hardik Pandya scored 54 runs off 38 balls. In response, the New Zealand team went all out with a score of 295 runs.

Why is Shubman Gill being compared to Babar Azam? These figures will give you the answer.