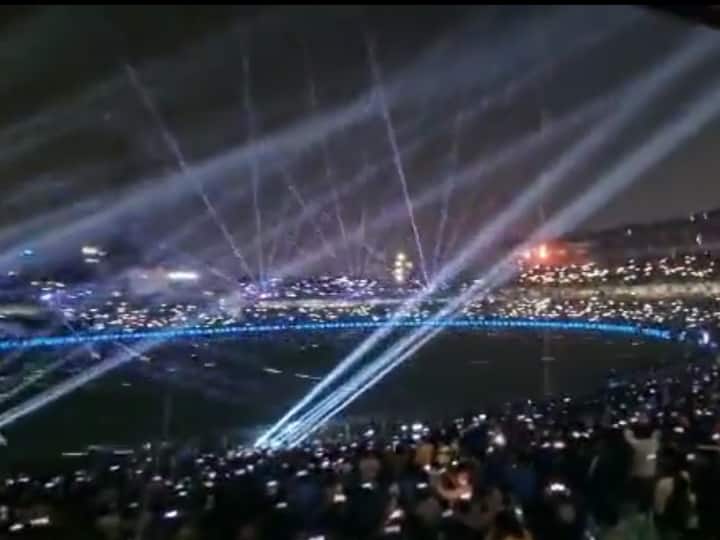 The second match of the ongoing ODI series between India and Sri Lanka was played at Eden Gardens in Kolkata. In this match, the Indian team won by 4 wickets. After this victory, a ‘laser show’ was seen at Eden Gardens, the video of which was shared by former BCCI President Sourav Ganguly on his Twitter account. In this video shared by Ganguly, a spectacular laser show was seen inside the Eden Gardens ground.

The scene of this show was being done in full view. The entire floor was dark and the laser lights pulsing all around added to the beauty of the scene. During this, along with the laser light, people had also turned on the flash light of their mobile phones. This was adding more beauty to the sight. Ganguly thanked the Bengal Cricket Association for this laser show. He wrote: “Congratulations to the Indian team for winning the series. Thanks to the Cricket Association of Bengal (CAB) for holding this laser show. With this victory at Eden Gardens, the India team took an unquestioned 2-0 lead in the series. Now the last game of the series will be played on January 15.

Congratulations to the Indian team for winning the series… well done CAB for the wonderful laser show to celebrate. @bcci pic.twitter.com/MsfHzhLjIP

This match saw an excellent game of bowling by the Indian team. The team bowled first and took out the Sri Lankan team with 215 runs in 39.4 overs. In this, Chinese bowler Kuldeep Yadav showed a great performance. He took 3 wickets for 51 runs in 10 overs. He too was awarded ‘Man of the Match’ for this brilliant performance. Apart from this, fast bowler Mohammad Siraj took 3 wickets, Umran Malik 2 and spinner Akshar Patel took 1 wicket.