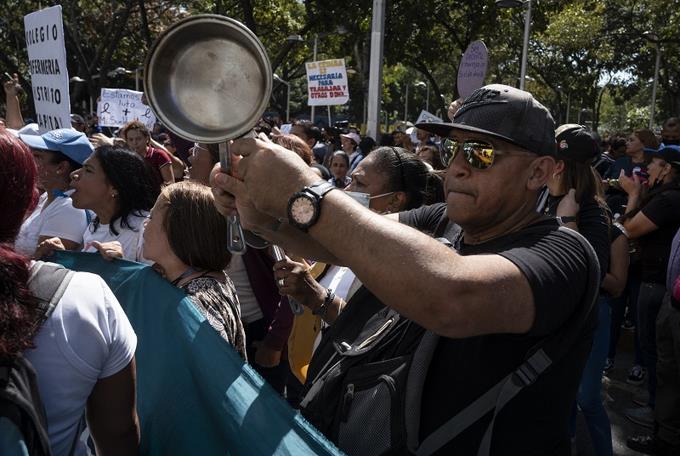 The Venezuelan Observatory of Social Conflict (OVCS) reported on Tuesday 28 protests in various states of Venezuela, in which the greatest demands were wage improvements as well as basic services.

The demonstrations took place, according to the publication of the NGO on its Twitter account, in 10 of the 23 states of the Caribbean country, including Caracas.

"The protagonists of the peaceful demonstrations were the teachers of the Fe y Alegría schools from all over the country, who came out to defend labor rights"added the OVCS.

The president of Venezuela, Nicolás Maduro, called on Tuesday for workers across the nation to take to the streets to protest against the sanctions imposed by the United States.

The president asked the working class to take this initiative in all the states of the country, following the example of the workers of Guayana, in the Bolívar state, "that a week ago thousands took to the streets to say enough of sabotage, enough of guarimba (violent protest), enough of criminal sanctions".

The trade unionist Rubén González informed EFE last Friday that at least 10 workers were arrested in the last week after protesting to demand better wages and compliance with collective agreements in the basic companies of Guayana.

In the last seven days there have been protests in almost all regions of the country, in which thousands of workers, most of them from the public sector, are demanding wage increases since the minimum wage -whose amount is set by the Government- is about seven dollars a month, while a family needs 50 times that amount just to eat.

Apple iPhone Ultra will be dangerously tempting in 2024