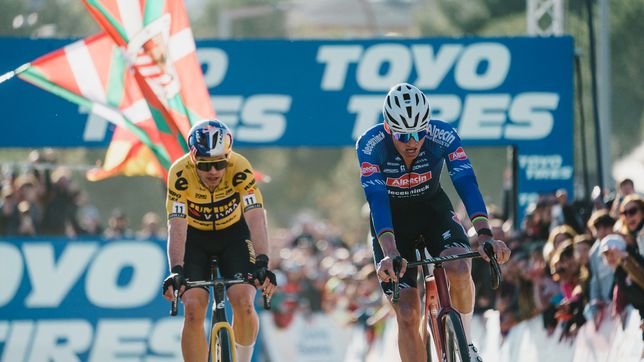 I woke up in Benidorm with the feeling that it was a different Sunday. Temperature somewhat lower than other days that was quickly compensated when entering the circuit with the passing of the morning and the thousands of people present (13,000 point from the organization)., which gave heat to the corridors. A mass of fans, being for many the first time they saw a cyclocross event, and leaving the venue with a smile, with the feeling of having spent a morning they will remember. Mathieu van der Poel won the spectacular World Cup event in Benidorm, the first to be held in Spain since Igorre in 2011. He did it after winning a spectacular one-on-one with Van Aert. Both are the best, as they have shown throughout the winter, and on a circuit with such a fast final part, a sprint was likely. It happened and Van der Poel, better placed, did not give the Belgian an option or to be able to put a wheel. Belgian Eli Iserbyt completed the podium. Before, in females, the Dutch Vam Empel achieved a double victory: he raised his arms in Benidorm and also certified his victory in the general of the World Cup.

Belgians, Dutch, Spanish arrived from all over the Peninsula… all of them met in the new circuit formed between the parks of Foietes and Moralet. The feeling among those present was that the resources were optimized to the maximum to leave a circuit like this. Then it was necessary for the runners to do well, and that’s how it was. The start list gave clues to this, because the three cyclocross aces were there, since together with the two flagrant stars, Tom Pidcock was also present. The Briton, who wore the world champion’s rainbow jersey for the last time since he will not compete in cyclocross again in the little that remains of the winter season, finished in fifth position. Felipe Orts, the great banner of our country and who finished in ninth position, fulfilling his challenge (not easy) appeared with a recently renewed Spanish national champion jersey under the letters of Burgos BH. to be in the top 10, because all the elite were in Benidorm except the Belgian Michaël Vanthourenhout, who was low at the last minute after having a bad night.

Mathieu van der Poel wins in Benidorm ☀ after a long sprint with Wout van Aert. 🥵 Eli Iserbyt 🥉 takes the final place on the podium. With a 4th place, Sweeck is the overall winner of the #CXWorldCup. 🏆 pic.twitter.com/H7rizeWYpj

At the start it was Van der Poel who took the lead, even alternating that place with Tom Pidcock. Behind was Van Aert… who entered the flight of stairs on the first lap in ninth position. The question was not why he was so far behind, rather it was how long it would take him to get to the top, because the Belgian always goes from less to more. It is true that he may have been in a more distant square than he imagined, but he had no problem joining the leading duo with the active Iserbyt and Laurens Sweeck. The latter finished in fourth position, which served the Belgian to certify his final victory in the general classification of the World Cup. On the fourth lap came the strongest attempt by Van der Poel, which caused the crisis of a Pidcock that could not stand… but Van Aert did, passing the sand with great force and climbing the most uneven grass areas sitting down, while the one from Alpecin moved the bike with his aggressive and fast style.

Then, the classic marking between the two began, which served Iserbyt and Sweeck to attack at the head when they reached the wheel of both, knowing that in a sprint they would have no option. However, the situation was controlled by both, although on the seventh lap (of nine) Van der Poel skidded with the rear wheel, as if it were a Moto GP, and with the bike crossed, only his skill prevented him from going to the bottom. I usually. Scare overcome and hand in hand in a sprint that seemed inevitable. Van Aert, watched from the circuit by his wife Georges and his little Georges, lost his head on the descent of the final forest and could no longer recover it: “I knew it was crucial to get out of there in the lead,” he lamented. He did not do it and Van der Poel, who shortly after crossing the finish line (near where the Italian Bugno won the World Road Championship in 1992) stopped exhausted and savored victory again with thousands of devoted fans. It was exactly one hour of racing, but what a time. A test that he hopes to come to stay and that leaves Van der Poel as the first name in the list of winners.