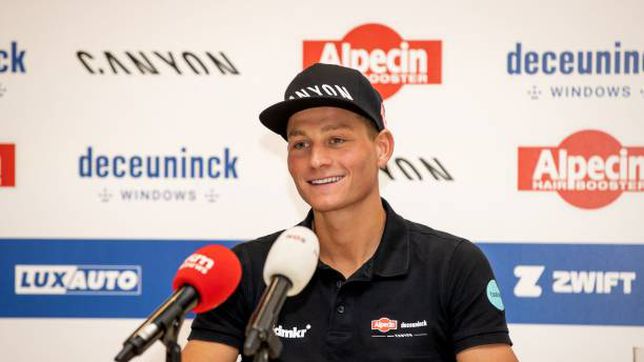 Mathieu Van der Poel returns this weekend to the mud in Hulst eager to prove his supremacy in cyclocross. In a prena conference offered before competing in the Hulst World Cup the Dutch cyclist analyzed how he approaches this campaign in the mud and also spoke about his goals on the road.

The Dutchman is looking forward to this new season after a back injury caused him to miss most of the races in the mud last year. “I am looking forward to competing again, and even more so after last winter, when everything was different due to my back problems. I have a lot of fun training. I was planning to return to cyclocross a bit later but I feel good while training. Also, otherwise it would be a long time without competing. I think I have the conditions to win in Hulst but I will have problems at the start, since I will start on the fourth row and it is difficult to overtake here, but I am not worried”.

Van der Poel does not hesitate to point out that his main objective in this cyclocross season is to win the world championship title. “My big goal is the World Cup, and Pidcock and Van Aert have said the same. But that does not mean that he will not fight for the other races. The World Cup is in Hoogerheide and that makes it more special”

The Alpecin-Fenix ​​cyclist also showed his desire to continue alternating road, cyclocross and road and assures that in 2024 he will increase his calendar in MTB races with an eye on the Olympic Games. “I will try to combine road, cyclocross and MTB. I already have two MTB races on my calendar: Valkenburg and Novo Mesto (May 5 and 12), although I can change. But I think I will do more MTB in 2024 with a view to the Olympic Games in Paris”.

However, in 2023, the priority for Van der Poel in addition to the Cyclocross World Championship will be road cycling events and more specifically the Tour de France. “When I finished the Giro, which was the first Grand Tour I completed, I didn’t feel very good. although we decided to do a concentration in height. That made me accumulate efforts and caused me to not be well on the Tour. I think the best thing for me is to focus on a Grand Tour and for next year I will focus on the Tour, almost certainly I will race there.