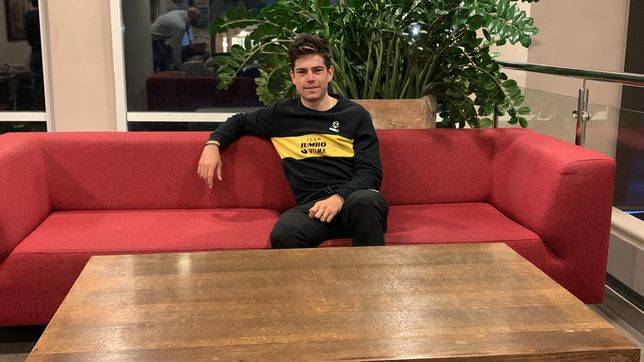 Wout van Aert is contesting a race in Spain for the first time. The Belgian (Herentals, 1994) makes his debut on Spanish soil playing the Cyclocross World Cup in Benidorm. Before the appointment, he spoke to a small group of media, including AS, in the town of Mutxamel, where his team is concentrated. In this talk, which lasts about half an hour, he answers all kinds of questions before going to dinner with the rest of his colleagues.

Well, the truth is that I think I’m in good shape. After a few intense weeks competing, I returned to Spain to continue with the team’s concentration and now we have this race in Benidorm. It is special, it strikes me that he has never competed here. We spend a lot of time training in this country.

You, Van der Poel and Pidcock have had some great cyclocross battles this winter. Are you satisfied with the results?

Of course. They have been exciting days, and adding eight victories is to be very happy. They were intense races, of a high level and you have to do your best.

In Spain, cyclocross is a modality that is booming. Do you notice?

Being here is an important step. I will check this Sunday, but I have seen Felipe Orts in many races in Belgium for a long time. A very technical runner. Hopefully it will be a great day for all the Spanish fans.

Do you see yourself combining cyclocross and road throughout your career?

I think if. I am 28 years old and I have been like this for a long time, so I hope to continue in the same way.

Do you think that so many months of competition can wear you down?

I’m comfortable like this. Cyclocross is fun for me. I enjoy. For example, now the training sessions are more of short efforts focused on cyclocross. Afterwards, they will be more long yields (will start the road season on March 4 at the Strade Bianche).

Who was your idol when you were young?

I watched a lot of races. Cyclocross, classics, laps… one of the great names and references for my entire generation is Tom Boonen. He is an example for all.

Since we are in Spain. The best Spanish cyclist for you?

Valverde was top for a long time. There are many strong runners. Enric Mas, Pello Bilbao, who won the Tour Down Under a few nights ago… Spanish climbers are great climbers. It is difficult to choose one in particular.

Would you be prepared to fight to win the Tour de France if Vingegaard fails?

Not (laughing). It’s very hard. Currently I am happy with my role in the team.

Has the new generation of riders (Pogacar, Van der Poel, you…), who almost always compete on the attack, have changed this sport to what we were used to?

I think if. In the last few we are seeing different riders winning different races at a high level, such as Alaphilppe. It is also good for fans. If you look back ten years you will surely see that the races are crazier now.

It is the first time you have competed in Spain, but do you see yourself racing here more times in the future?

Wait. In the future, perhaps he could be in the Giro and in La Vuelta. I don’t know. This year I will go to the Tour de France and I am also very focused on the classics. We’ll have to see it.

With your current good form, do you see yourself as a favorite for what’s to come?

Every race is a new beginning. It is true that the training sessions have been good and I am happy, but we have to keep working.

Last season, his team, Jumbo, had a very high-level campaign. Is that added pressure for this year?

Being in this team always requires fighting for what is most important. We have to try to be the best in all the races. This year the teams will have more experience and you will know more about us compared to last season. We have to follow our path and the mentality of giving the maximum in each training session and each race.

He has 39 victories to his road record (nine of them in the Tour de France). What career would you like to add to that list?

The Tour of Flanders and Paris-Roubaix are two of my big goals. This year I will try to fight for them.

“If you ever want to make a movie here…”