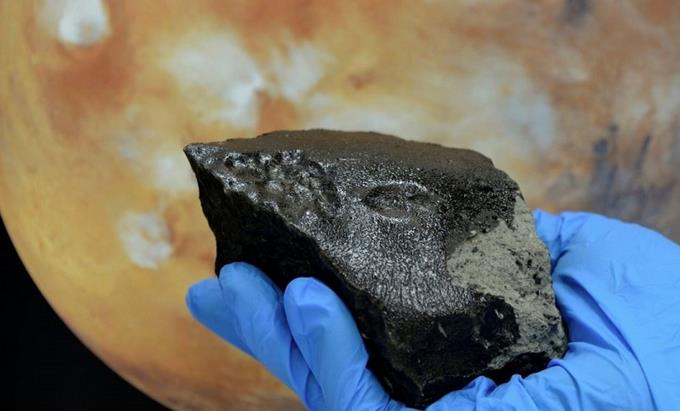 The Tissint Martian meteorite, which crashed in Morocco more than 11 years agocontains an enormous diversity of organic compounds, some unprecedented in relation to the red planet.

Tissint It is one of only five Martian meteorites that have been observed falling to Earth.. Pieces were found scattered in the desert about 50 kilometers from the city that gives it its name.

This sample of Martian rock formed hundreds of millions of years ago our planetary next door neighbor and was thrown into space by a violent event. Unraveling the origin of the organic compounds in the Tissint meteorite may help scientists understand whether the Red Planet once hosted life, as well as Earth’s geological history.

"Mars and Earth share many aspects of their evolution."says the lead author of the study, the researcher at the Technical University of Munich Philippe Schmitt-Kopplin. "And while life arose and thrived on our home planet, the question of whether it ever existed on Mars is a very hot research topic that requires a deeper understanding of the water, organic molecules, and reactive surfaces of our neighboring planet.".

Organic molecules contain carbon, hydrogen, oxygen, nitrogen, sulfur, and sometimes other elements. Organic compounds are commonly associated with life, although previous research on Martian meteorites has shown that they can be created by non-biological processes, known as abiotic organic chemistry.

"Understanding the processes and sequence of events that shaped this rich organic abundance will reveal new details about the habitability of Mars and, potentially, about the reactions that could lead to the formation of life."added co-author Andrew Steele of the Carnegie Institution, who has extensively researched organic material from Martian meteorites, including Tissint, and is a member of the Perseverance and Curiosity rover science teams.

The researchers were able to further analyze the organic inventory of the meteorite, revealing a link between the type and diversity of organic molecules and a specific mineralogy. Their efforts resulted in the most comprehensive catalog ever made of the diversity of organic compounds found in a Martian meteorite or in a sample collected and analyzed by a rover.

This work, published in Science Advances, revealed details about the evolution of the processes that take place in the mantle and crust of Mars, especially with regard to the abiotic organic compounds that were formed from the interactions between water and the rock.

Of particular interest was the abundance of organic magnesium compounds, a set of organic molecules that had not been seen before on Mars and that offer new insights into high-pressure, high-temperature geochemistry that shaped the deep interior of the Red Planet and indicates a connection between its carbon cycle and its mineral evolution.

The researchers say that samples returned from Mars by future missions should provide an unprecedented amount of information about the formation, stability, and dynamics of organic compounds in real Martian environments.

Tom Brady: “49ers had no chance of competing against Eagles”