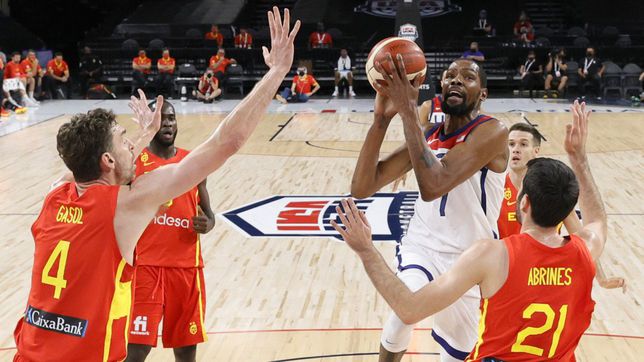 It is already a reality, which has been advanced in its final format by The opinion of Malaga: Spain, Luka Doncic’s Slovenia and the United States will play a friendly triangle of maximum sporting power, and of course the media, in Malaga.

AS already announced on July 2 that the FEB, which celebrates its centenary in a year in which Spain will also defend its crown in the 2023 World Cup, was working hand in hand with the Junta de Andalucía to carry out this pharaonic idea. The option of playing in La Cartuja, in Seville, was considered, but in the end the headquarters will be Malaga and the dates, from August 11 to 13.

The tournament will serve as a preparation for the World Cup (from August 25 to September 10, in Japan, the Philippines and Indonesia) and also as one of the jewels of the celebrations of that centenary of the Federationwho arrives with the absolute team as leader of the FIBA ​​ranking and European and World champion.

The FEB has managed to finalize the negotiations with USA Basketball. The relationship between federations is excellent, as demonstrated by Spain’s trips in 2019 and 2021 to play matches in Anaheim and Las Vegas. The Olympic champion, the powerful Team USA, will be in Spain (as before the 2010 World Cup and the 2012 Games) together with the Slovenia of Luka Doncic, a star on the entire planetbut also very loved in our country for his past at Real Madrid.

In addition, another great tournament will also be played in Andalusia, in this case in Grenada and with Canada and Argentina. The Canadian team is going to be one of the sensations, at least at the media level, of the next World Cup, since it has brought together a spectacular group of NBA players (led by Andrew Wiggins, Shai Gilgeous-Alexander, Jamal Murray…), and Argentina is another classic, one of the best FIBA ​​teams of the last two decades and has played several memorable matches against the Spanish team.