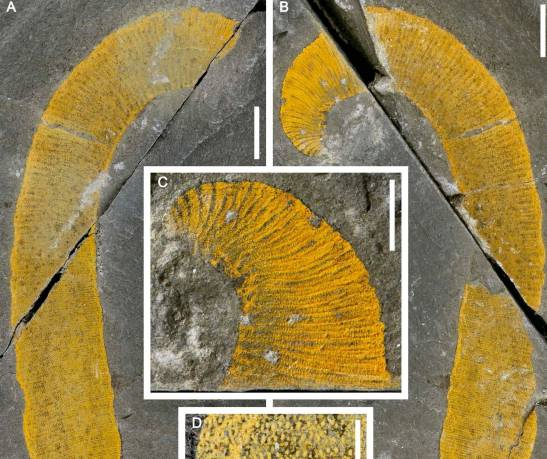 Scientists from the Complutense University of Madrid (UCM) and the Institute of Geosciences (IGEO) identified several marine worms from the Paleozoic era, 455 million years ago, in the Moroccan site of Biota de Tafilalt. They correspond to the new genus and species Anguiscolex africanus and the new species Wronascolex superstes.

Paleocolecid worms are not rare in the Paleozoic, the problem is that 99.99% of their fossil record is made up of their isolated sclerites – hard plates embedded in the cuticle –, which tend to accumulate in certain limestone rocks. That is, this type of worms lived in all the Earth’s seas, but there is no evidence of their fossils beyond a tiny fraction of deposits.

The worm fossils at the Moroccan site were articulated and well preserved in shales —fine-grained rocks— and in an environmental context dominated by turbulent waters, which is why the discovery, according to UCM and IGEO paleontologist Juan Carlos Gutiérrez Marco, , is a “paleontological surprise in an unfavorable geological context”.

It is a paleontological surprise in an unfavorable geological context

The cuticle of these marine worms, described in the journal Historical Biology, was covered by phosphate microsclerites (from 20 to 100 thousandths of a millimeter), arranged in an annular fashion in successive segments, and its conservation was favored by rapid burial after previous protection.under bacterial veils which precipitated iron sulfides.

These two individuals join the one found a few years ago in the same place and by the same research group, the worm Gamascolex vanroyi.

Worms that lived when Morocco was “polar”

Another of the conclusions highlighted by the study is the ‘gigantism’ of the three known worms in the Tafilalt Biota, whose size is two to three times larger than the world record for paleoscollected in Australia, North America or west-central Europe.

“This fact may be related to metabolic causes involved in the so-called ‘polar gigantism’, since Morocco was very close to the Earth’s South Pole in the Ordovician period”, says Gutiérrez Marco.

This fact could be related to metabolic causes involved in the so-called ‘polar gigantism’, since Morocco was very close to the Earth’s South Pole in the Ordovician Period.

This is the third of these organisms found in Biota Tafilalt, an exceptionally preserved site where fossils of groups with hard parts (trilobites, molluscs, echinoderms) mix with others with soft to weakly mineralized bodies (rare arthropods, worms, paropsonemid disks…).

“We are trying to reconstruct ecosystems and organisms from the past, and the data obtained help in this case to refine the geological correlation of fossiliferous units in Morocco with other contemporary ones located on the marine platform of the disappeared continent of Gondwana”, points out the UCM researcher.

The finding forms part of an ongoing investigation into the Moroccan Ordovician in relation to the successive projects of the National Plan (Ministry of Science and Innovation), in which twice a year 15-day campaigns are organized in the desert terrain. In addition, researchers have a network of collaborators who locate fossils throughout the year and who contact them when something catches their attention.