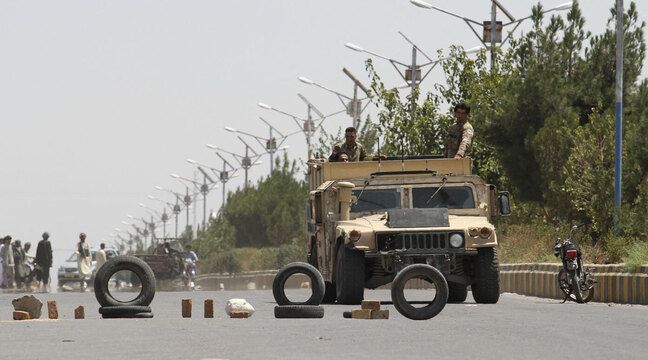 On Sunday, the Taliban tightened their grip on northern Afghanistan, seizing two additional provincial capitals, including the large city of Kunduz, in a major offensive that the army appears unable to stop.

The city of about 300,000 inhabitants, which has already fallen twice in recent years to insurgents, in 2015 and 2016, is a strategic crossroads in northern Afghanistan, between Kabul and Tajikistan. Taloqan, capital of neighboring Takhar province, was also threatened on Sunday. The capture of Kunduz has been the main military success of the Taliban since the start of their offensive in May, which began with the withdrawal of international forces, which should be fully completed by August 31.

By the end of June, the Taliban had conquered the districts around Kunduz and the important border post of Shir Khan Bandar, on the Tajikistan border, the nerve center of economic relations with Central Asia. The Defense Ministry said government troops were trying to seize key areas of Kunduz. “The commando forces have launched a clean-up operation. Some places, including national television and radio buildings, have been cleared, ”he said.

“The capture of Kunduz is really important because it will release a large number of Taliban fighters who can then be mobilized elsewhere in the north,” Ibraheem Thurial Bahiss, a consultant for the International Crisis Group (ICG), told AFP. Images on social media showed, over the weekend, what appeared to be released Taliban prisoners in newly captured cities, who could then join their ranks.

After Kunduz, Sar-e-Pul, 600 km west of Kabul, also fell to the Taliban. They had already seized Sheberghan, 50 km further north, on Saturday, the stronghold of the famous warlord Abdul Rashid Dostom. “The Taliban surrounded an army battalion on the outskirts of the city. All other parts of the city are under the control of the Taliban, ”said Mohammad Hussein Mujahidzada, a member of the Sar-e-Pul province council.

Parwina Azimi, a human rights activist, said by telephone that administrative officials and the rest of the armed forces had withdrawn to the barracks about three kilometers from Sar-e-Pul. Kabul’s inability to control the north of the country could prove crucial to the government’s chances of survival. Northern Afghanistan has always been seen as an anti-Taliban stronghold, where resistance to them was strongest when they came to power in the 1990s.

The Taliban ruled the country between 1996 and 2001, imposing their ultra-rigorous version of Islamic law, before being ousted by a US-led international coalition for their refusal to hand over Osama bin Laden after the September attacks. 11. On Friday, the insurgents had also seized, without encountering the slightest resistance, the city of Zaranj, capital of the distant province of Nimroz (south-west), on the border with Iran.

Pope Francis cries out against war on visit to DR Congo