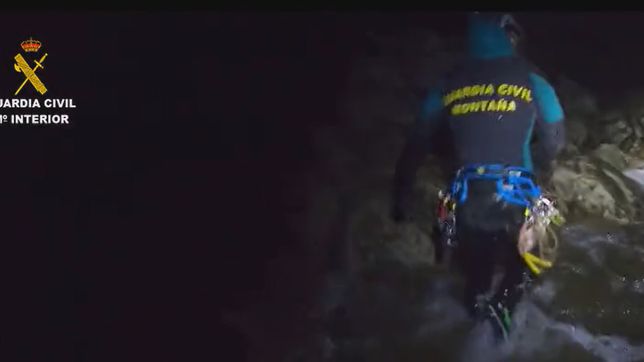 Two men who practiced canyoning have died this Monday in the torrent of l’Assarell de Pollença, in Mallorca, due to the strong rise of the water due to the rainfall that fell on the island, sources from the Civil Guard and Mallorca Fire Brigade have reported.

Marina Cuevas, the 29-year-old woman who was on the excursion with them and notified the ER that they were in serious danger, managed to be rescued by the Civil Guard teams.

The canyoner has published this Tuesday on Facebook that He saved his life thanks to the fact that one of the deceased, Luis, his partner, threw the backpack with the mobile phone with which he was able to call 112.

The deceased are Luis Paris Musolas, 37, and Martín Prado Mestre, 28.

On the morning of this Monday, The two men and Marina entered the torrent, located in the north of the island, to explore it, but the flow of water due to the heavy rains surprised them on the way down. and they got stuck in one of the pools.

The lifeless bodies of the two canyoners were found late at night by the Special Rescue Group for Mountain Intervention (GREIM) of the Civil Guard, that an investigation has been opened to clarify what happened.

In her publication, Marina affirms that what happened is “incredible” and a “nightmare” and that it was Luis who pulled her out of a “deadly waterfall and then, without separating from Martín at any time”, he threw the backpack at him where there was a telephone with which he alerted 112 of the serious situation.

“Nothing cures this (…), I will still take time to assume everything. Thank you. Two big stars will now shine in the sky. Luis, you will always be the love of my life and who has taught me to grow and love. I love you honey ”, Marina wrote on the social network.

The canyoner thanked the shows of support and solidarity that he is receiving after this tragic event.