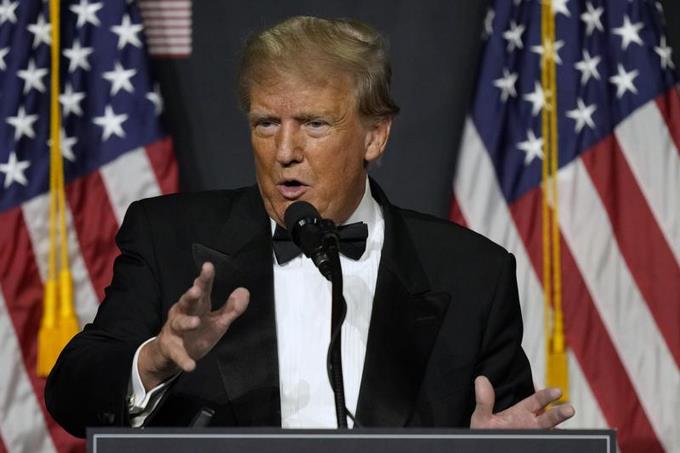 After he left the White House after being defeated last year, Donald Trump has flirted with the prospect of running for a third campaign for the presidency. But in the week since he officially declared his candidacy, the former president has maintained a discreet attitude, something unusual for him.

There hasn’t been a massive stadium kick-off to his campaign, remarkable for someone who has made such events a feature of his public life. His newly reinstated Twitter account, which helped fuel his political rise nearly a decade ago, remains silent in the face of his more than 87 million followers.

He has not announced plans to visit the crucial early voting states that will shape the race for the Republican nomination, nor has he offered a series of high-profile interviews. In fact, since he gave the speech in which he made his announcement, Trump has not held any public events.

“The fact that he doesn’t have a schedule makes you wonder if he’s really running or if this is just a business development opportunity or something to distract from the Justice Department,” said veteran Republican strategist Scott Reed, referring to that department’s investigations into the way Trump handled secret documents and his attempts to overturn the 2020 election results, which are expected to intensify in the coming weeks.

Trump had never held public office before being elected president in 2016, nor has he ever appreciated the cadence and organization traditional campaigns often have. And several aides noted that the former president, who made his announcement unusually early and a week before the Thanksgiving holiday, does not want to detract from the runoff election for Georgia’s Senate seat, the which will take place on December 6, with which this year’s midterm elections will conclude. The aides, who insisted on anonymity so they could discuss campaign strategies, said Trump will speed up his campaigning soon.

But the campaign’s low-key start reflects the hasty and chaotic nature of his announcement, made while midterm votes were still being counted and even after some of his closest advisers and allies had urged him to He would hold off his announcement until after the Georgia runoff was over. It also comes at a time of particular political vulnerability for Trump.

The former president has spent his post-White House years positioning himself as the undisputed leader of the Republican Party, but now faces heated criticism within the party for contributing to a disappointing performance in this month’s midterm elections. And other Republicans are openly flirting with their own presidential bids, making it clear that they will not stand aside for Trump to be nominated.

Meanwhile, the legal pressure on the former president is intensifying. Attorney General Merrick Garland appointed a special prosecutor last week to oversee the Justice Department’s investigation of classified documents recovered from Trump’s Mar-a-Lago club in Palm Beach, Florida, as well as key aspects of a separate investigation. involving the January 6, 2021 insurrection at the federal Capitol and attempts to overturn the results of the 2020 elections. And on Tuesday, the Supreme Court gave its go-ahead to the imminent delivery of Trump’s tax returns to a legislative committee after a three-year legal dispute.

In any case, Trump enters the race with an obvious advantage. The ex-president had been acting as a de facto candidate for months, and had been running a political operation for some time. After two campaigns for the presidency and four years in office, he also has longstanding relationships with state and local party leaders, including many who remain loyal to him.

Meanwhile, Trump has been performing at a series of private events. Last week he hosted the America First Policy Institute’s “Gala and Experience” event in Mar-a-Lago, which included policy sessions, a Thursday night concert with country star Lee Greenwood, a golf tournament and a black-tie gala Friday night, at which Trump made remarks criticizing Garland’s decision to appoint a special counsel.

Trump also appeared via video at a Conservative Political Action Congress in Mexico and answered questions live via video at the annual Republican Jewish Coalition leadership meeting in Las Vegas, where a long list of other potential contenders for the nomination by 2024, who showed up in person, courted the donors. Some argued that it is time to leave the Trump era behind.