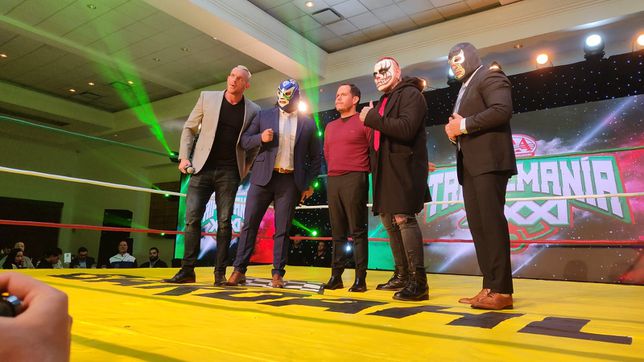 Triple A Wrestling announced the return of Wrestling World Cup at the Pan American Stadium of the Charros de Jalisco; This is the world championship where wrestlers from various companies around the world participate and in each edition a dream team on the Mexico team.

The event had not been held since 2017, which will return in 2023 and although details are still to be revealed, it is already confirmed that the dream team Mexican will be made up of the Triple A Mega Champion, Son of the Viking, Psycho Clown and the great return of Alberto The ‘Patron’ as representative of Wrestling Nation.

It should be noted that Alberto El ‘Patron’ was part of the dream team Mexican who won an edition of Lucha Libre World Cup with Mistery King Y Myzteziz in previous years.

There will be eight teams in the men’s field, two of Mexico, one each from Canada, the United States, the United Kingdom, Japan, Latin America and Qatar.

In the women’s, they will be teams of Mexico, the United States, Japan and the Rest of the World.

There will be three Triplemanías

Like last year, this 2023 the three editions of triplemania in its XXXI edition, which will take place in the Sultan Palace in Monterrey, Caliente Stadium in Tijuana and Arena Ciudad de México.

For this year there will be a new modality, ‘War of Rivalries’, in which incredible couples will be made with the aim of eliminating each other. The winners will be saved and the losers will advance to the Final where they will present masks or hair

The couples that were announced are: Sam Adonis and Psycho Clown; Pagan and Rush; Alberto El ‘Patron’ and Pentagon Jr. and finally, DMT Azul and Blue Demon Jr.the latter want to sign a duel of mask vs mask.

It will have its own arena

One of the objectives that Star Caravan was marked for this year was to have a place where there would be their own struggles, which has already materialized and is close to opening in Cancun. ‘Luchatitlán’ is named after this entertainment center that will be a complete experience in Mexican culture and wrestling, as there will be performances every day and restaurants with national food.

Special function for the Armed Forces

On the occasion of Bicentennial of the Heroic Military College, Dorian Roldán announced that there will be a performance at the Military Camp 1 A to thank the support that the armed forces have given to the wrestling company every time they appear at a venue.

Haiti, paralyzed one day after acts of violence and great tension