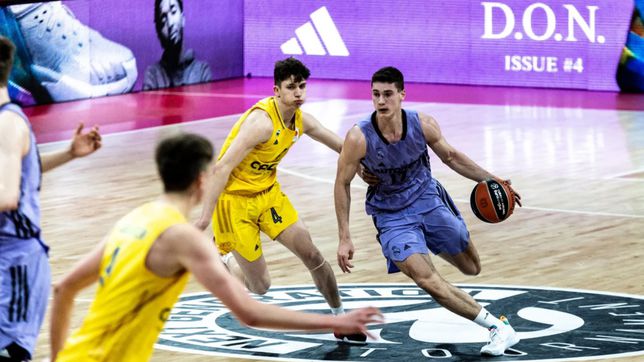 The qualifying phase of the ANGT in Munich is endorsing something that was intuited: Real Madrid has worked very well, has high-level players and is destined for something big this year. He is close to reaching the first objective: the direct pass for the final phase that will be held in May at the Zalgirio Arena in Kaunas (Lithuania). At the moment, three out of three in group A. He will be in the final this Sunday, January 22, to seek the plenary session. The ostentation already has it with them, now they need to finish the good work by proclaiming themselves champions.

To the two victories on Friday, one more was added on Saturday, which was the key to moving on to the final. 60-103 against Ulm; 92-62 against Milan. Alba Berlin was the other team that won the two previous games and everything was played on this card. And it seems that Javi Juárez’s men did not have one but several aces up their sleeve and that they did not even use them, they went on the attack and the hand was favorable to them. From minute 5 there was no more to see. The capacity of Hugo Gonzalezwho has already made his debut with the first team at the hands of Chus Mateo, to alternate outside shots with plays of strength in penetration, was joined by the success of the Russian Egor Demin, of 2.03 meters, who also hurt himself during the second quarter and continued without much problem, creating a very big one for the Germans. It should be remembered that these two are still 16 years old. Demin scored 27 points and González chipped in 24 points. One who has recently come of age, the Slovenian Jan Vide, was the third in contention with 21. The physical superiority was added to the one that came thanks to the monumental success of the visitors: 53% in shots from three and 49% in shots from two, with 26-9 in assists and 25-3 in steals. Non-stop at any time. All basketball. This is how the marker came out, of course: 47-113. The white coach assured that this was “one of the best performances in attack” what they could do

The only Spanish team in this tournament is Real Madrid, which will face one of these three teams tomorrow: Zalgiris, Panathinaikos or a special team created for this championship. In the overall disputed so far, the meringues have accumulated a differential of 139 points. At another point the phases will arrive in Patras (Greece), where Joventut will be, in Zadar (Croatia), where Barcelona and Zaragoza will go, and in Belgrade (Serbia), where Valencia will play. Only the winner of each tournament has a direct qualification for Kaunas and Madrid is in the best position.