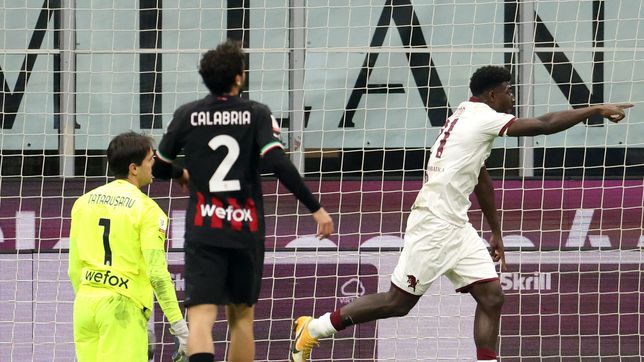 First surprise in the Italian Cup. Milan was removed from the competition on the day it opened, against a Torino team that held on with 10 players from minute 70 and won an unexpected classification to the quarterfinals after extra time. It was a triumph very much in the style of ‘Toro’ and his coach, Ivan Juric, who shines in difficulties with organization and intensity.

Pioli tried out an innovative 3-5-1-1, with a very active Brahim behind De Ketelaere’s back. The Belgian was looking to unblock himself and was close to achieving it with a header, after a corner, which hit the post. It was the best chance of a fairly watered-down first half in which the former Bruges player, starting for the first time since October, also came close to scoring with a shot neutralized by Milinkovic-Savic.

El Toro, who had a one-on-one opportunity that Lukic lost with Tatarusanu, grew at the start of the restart until, at 70′, Djidji saw his second yellow card for stopping Messias with the bad ones during a counterattack.

In numerical superiority, Pioli’s men turned to the attack, but they continued without having an aim despite having removed several starters from the bench (Theo, Calabria, Bennacer, Leao, Giroud…). Torino continued to defend well and clinging to the interventions of a Milinkovic-Savic in a state of grace also during extra time, in which they scored the unexpected goal of victory. At 114′, Lukic put together a perfect counterattack that Bayeye ended up centering for Adopo, author of the decisive 0-1. The final siege of Milan was intense, but it did not bear fruit. After having shot a 2-0 with Roma, another disappointment arrives for Pioli’s men.

At what time and how to watch the matches of River, Racing and San Lorenzo