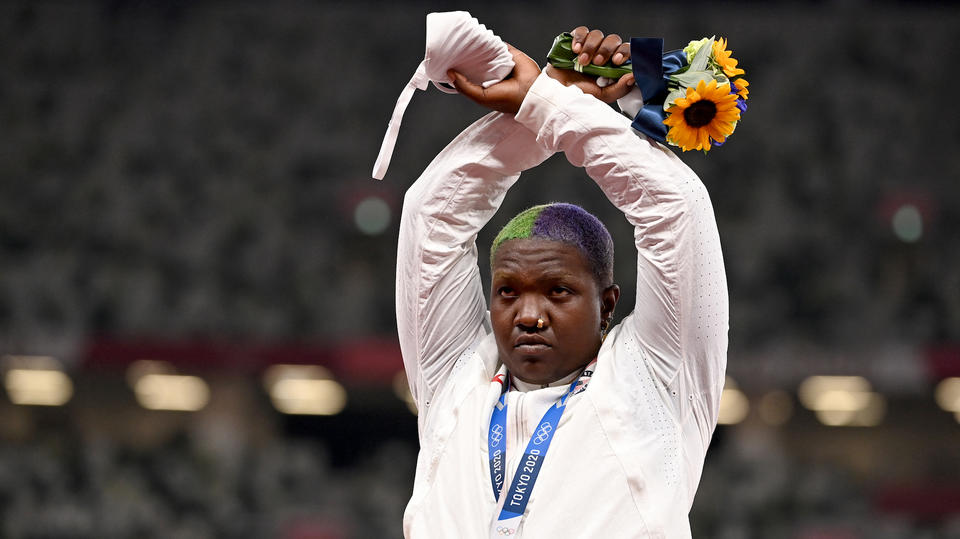 Arms crossed over head, face impassive. American Raven Saunders became the first athlete to use the Tokyo Olympics to send a political message on Sunday (August 1).

Raven Saunders, 25, made an X with her arms when she received the silver medal in the shot put. A gesture that, according to her, represents “the crossroads where all the oppressed meet.”

“It is important for me to bring back this silver medal, because I represent so many different people, I know there are a lot of people looking at me,” he explained at a press conference. Black and openly gay woman, Raven Saunders is very committed to the rights of LGBTQ people. He has also spoken out on many occasions about mental health problems after going through depression.

“I am happy because I know that I will inspire many people,” said the Olympic vice-champion. “Girls, toddlers, LGBTQ people, people who have struggled with depression … Many people who once wanted to give up. This victory is not just about me. “

Despite his optimistic words, Raven Saunders risks being penalized. The International Olympic Committee (IOC) has a very specific policy regarding political messages: athletes have the right to present their opinions on social media or in the media, but not at official medal ceremonies. Therefore, Raven Saunders broke the rule.

The gesture of the person who calls himself “Hulk”, due to his difficulty in controlling his strength, is currently being analyzed by the IOC. You have not made a decision yet. He assured at a press conference that “he will study this file” to “understand precisely what happened.”

Before Raven Saunders, many athletes used the Olympics as a political springboard. In 1968, for example, at the Olympic Games in Mexico, black American athletes Tommie Smith and John Carlos raised their fists and lowered their heads during the anthem, a gesture associated with the Black Panthers. They wanted to protest against racial segregation in the United States.