They seek to turn Punta Cana into a smart city 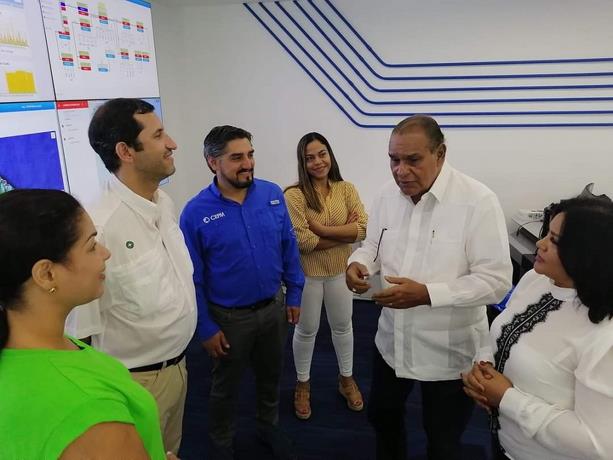 The Punta Cana-Macao Energy Consortium (CEPM) has invested US$140 million to expand its power generation capacity and thus supply 98% of the energy needed by the large hotel chains in the area.

With InterEnergy Group, as parent company, in two years CEPM has expanded its generation capacity by 85 megawattsincorporating a natural gas regasification station and installing a static compensator for reactive power for its 138 kilowatt (KV) line, raising the quality of electricity service.

The executive director of the institution, Roberto Herrera, together with the general manager, Oscar San Martín and other executives, received in their facilities the director of Listín Diario, Miguel Franjul, together with his wife, journalist Wendy Santana de Franjulwith whom they discussed their achievements, projects and contributions in order to help Bávaro-Punta Cana become one of the first smart cities in the Caribbean.

Electric vehicles
CEPM executives discussed the Emobility project, through which have installed charging stations for electric vehicles in their concession area, with which the company bets on a transport system four times more efficient than fossil fuel vehicles, derived from oil. A solution that they bet on and have at the disposal of their clients and hotels, to move with clean energy.

The consortium has managed to replace 99% of its fleet of conventional vehicles with electric ones; of which it provides two 16-passenger minibuses and another 2 type (Ban) to businessmen in the area, so that they become familiar with the novelty.

As part of the exhibition, preciselye in one of the electric cars, Franjul made the journey from Santo Domingo to Bávaro, whose comfort and displacement was satisfied.

In addition to generating, transmitting, distributing and having investment in wind energy, CPEM-Cero is in force, as allies to development. District Energy supply thermal waters; hot, sanitary for laundries and air conditioners to 55 thousand hotel rooms.

Demand in AC
Product of the efficiency levels, evidenced with losses remaining below 5%this consortium also in charge of the Bayahibe Electricity Company, has achieved that its services are in demand in Panama, Jamaica, Uruguay and Chile.

The reduction in losses is the result of customer satisfaction with the service and their willingness to pay.

“It is not true that the Dominican is poorly paid, it is that you have to serve him with quality,” Roberto Herrera explained during the tour, and highlighted the low percentage of fraud that exists in the perimeter in charge of the consortium, but at the same time the little possibility that exists of this because the technology they use does not allow it.

Its executives emphasize the commitment assumed to supply clean energy, in support of the development of sustainable tourism, For this reason, its investment program included a 22 MW General Electric LM2500 dual-fuel turbine (natural gas-diesel), managing to restore service quickly, in the event of any contingency or atmospheric phenomenon, and diversifying the generation matrix.

“All these new projects expand our capacity to generate and transmit energy, anticipating the projected growth of the tourist areas we serve. We are very proud to support energy growth based on an innovation agenda that guarantees economic development in this important tourist destination of the country”, pointed out Herrera.

The technology
The energy service has modern technology, from an antenna in an area of ​​several clients, it is monitored from a panel at the central headquarters, the services are opened or closed remotely, their consumption is known, just as they are public lighting lamps controlled. To maintain their levels of efficiency, they work online and in case of eventualities, arrival times are around 15 minutes, on average, at the same time the monitors are updated with the results of the reading of each connected meter.

PostNL – An NFT and a gram of gold; good investment? Analyst thinks so