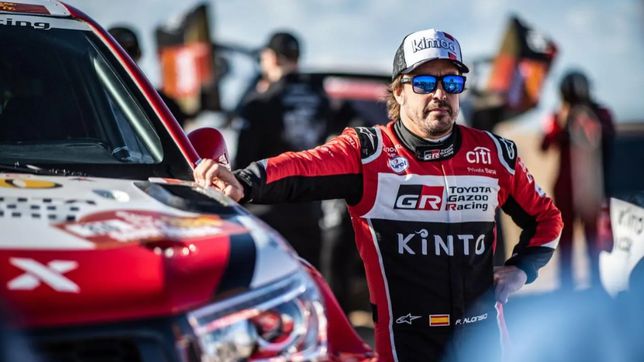 Own Nasser Al-Attiyah (Qatar, 52 years old) explained how hard it had been for her to get to where she is now. Competing in the Dakar since 2004, the Qatari needed to land in a good team to start making history in a race where he has his fifth shot Touareg. Luck has smiled on him in recent editions, although he says openly that he is “the best”. He does not dodge any questions nor does he hide a winning formula to succeed in the toughest rally in the world. The one, in which, as he has shown, speed is not everything.

—They dominate again and started to do so from the first week.

—We have had good feelings, especially after the first week. It left me satisfied to arrive at the end of the first week with a significant advantage in the lead. From there we only needed to drive the second week and although it is never easy, we always try to do our best.

—You talk about it not being easy, but in recent years it has always seemed easy to you.

“No, not at all, it’s not. But what we try to do is make it easy every day, because we need to find the sensations in each stage to be able to have a race without problems. But this year we have gone through stages that have also been very hard for us. It hasn’t been an easy Dakar, but from the first moment we tried to be strong in each stage and I was very happy to have such a lead after three days. It’s something we also did last year.

—We know that you like football, could you say that you are the Messi of the Dakar?

—In football, the best player is also the one who has won the World Cup this year and that has been Messi. People do say that Nasser is the Messi of the Dakar (laughs).

—But don’t you think that in a career like this, luck also plays a role?

“Luck also matters.” Of course you also need to be lucky on the Dakar, but if you realize everything we do, we are doing it in a really amazing way. I have a lot of respect for other pilots, Carlos (Saínz), Peterhansel, Loeb… They are very strong drivers and they are in very strong teams. But as you say, it has been seen that sometimes winning is good or bad luck for the driver. Both me and Mathieu (Baumel, his co-pilot) Like the team itself, we always do things in a certain way so that everything goes well.

—Do you think that the rest of the teams are not doing well?

I don’t know, I don’t work with them. Audi, for example, is a very strong team.

—I didn’t say the same thing about them at first…

—I know very well what I said and also that I spoke of Loeb as a rival. But Sébastien made a lot of mistakes since the Dakar started. He has now recovered and is third overall, he is trying to close the gap to finish on the podium, but he doesn’t worry me. It’s fine that I work like this, but because he only makes me up for five minutes a day, you know? That with our advantage is nothing. He still has a very long way to go and he would have to catch Moraes first. But also, if you push like he is doing right now, problems can arise. As long as he recovers us five or ten minutes a day we won’t have a problem with the stages that lie ahead. We want to win and defend the title, we have done a good job and that is what I always say, there are dangerous rivals but we have to push to win.

“Have you pushed as far as you can?”

—I started to push on day 3, when I won the stage, on day 4 I was already a little slower because the route was dangerous, on days five and six I also pushed to win and from day seven I already understood that we needed to lose. At that moment we needed to think and we knew that this was our strategy. In our situation you need to lose stages and start from the bottom. You don’t need to relax, which is different. I compete with three gears: one is when I start behind, another when I need to finish in the top three and another that I activate when I see that I can win. Those are the ones I use every day, that’s how I do it.

—And so he wins… Is that management the one a pilot needs to win the Dakar?

—To win the Dakar you don’t need to go fast, anyone can go fast. You need to be strong, smart and never make mistakes. The pilot needs experience, very very good experience. You need that and also understand everything and what is the level. If you go above your means, you will start to have problems and if you go below, you lose… you have to know how to find a balance and it is not difficult to do so. That is part of the race. Audi immediately won the first two stages and they gained a lot of confidence and in the third stage it didn’t go so well and that’s where the problems started. When you start to lose everyone wants to push and push, while when we won and found the times, that’s where the problems for the others started.

—How do you imagine next year’s Dakar?

—Do you think you will have the same power within the team if Fernando Alonso arrives?

—Fernando would not complicate things for me because he would need time to win. Loeb has nine world rally titles, he started competing in the Dakar in 2016 and has not won so far. 2016, 2017, 2018, 2019, 2020, 2021, 2022…. 8 years have passed. But it is true that he keeps trying and is very close. But sometimes you need to understand how to manage it all. It’s the same thing that happened to me. When I arrived in 2004, I was winning stages but I couldn’t win the Dakar. I was winning, winning and winning every year, I was going fast… but suddenly when I changed teams, to a good team like Volkswagen Touareg, that’s when I knew I could win. Having a great team behind you helps to win the Dakar.

—I hope I see you here again and that you come to the Dakar to compete. He is a good friend of mine, we talk many times and personally I think he will come back. Of course (who can win), why not, he has some good skills, but he will need time if he wants to win the Dakar.