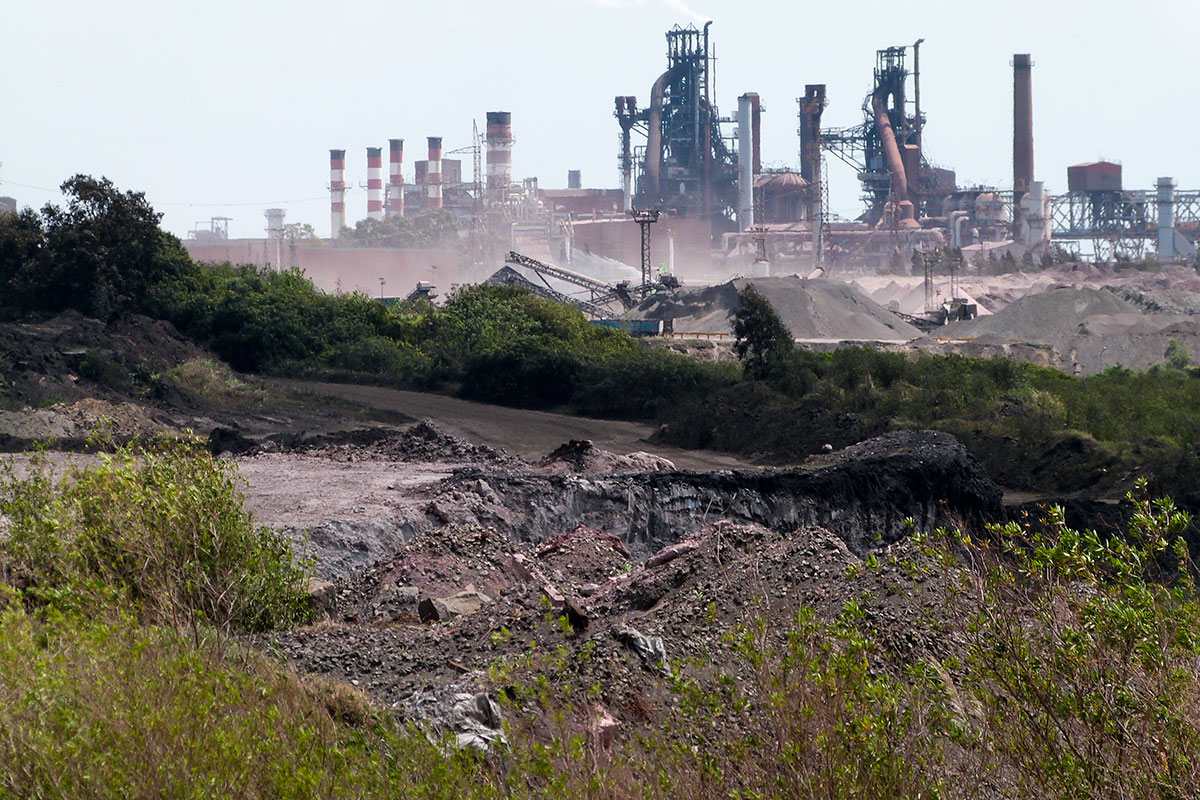 The Chamber of Cassation ordered to proceed with the investigation for crimes of attack to the public health and violation of the law of dangerous residues against the company Ternium (former Siderar), that the judge Carlos Villafuerte Ruzo tried to avoid.

Residents of Ramallo, Buenos Aires, denounce the contamination of groundwater with heavy metals, supported by studies by the Federal Police and the Buenos Aires control agency.

In this case before the Federal Court 2 of the city of San Nicolás, a group of residents of the city of Ramallo denounced the company of the group led by Paolo Rocca, for the possible practice of crimes of attack to public health and violation of the hazardous waste law, two criminal figures that fall within what are currently being defined as “environmental crimes”.

The lawyer representing the affected neighbors, María Gimena Viviani, specified that the contamination tests are objective, serious and relevant.

Meanwhile, the Rosario Federal Chamber is expected to decide on a precautionary measure presented by environmental organizations to protect the native forests and wetlands of the Paraná Delta.

The cassation decision reverses a decision by Judge Carlos Villafuerte Ruzo —in charge of Federal Court 2 of San Nicolás— in which he declared himself incompetent to intervene in the proceedings against the Techint group company. In this way, the Chamber ordered that the case continue its processing in the same Court in charge of Villafuerte Ruzo.

In its decision, the Chamber of Cassation did not spare criticism of the judge for the serious delays in the progress of the investigation against the company of the group led by Rocca.

Residents of Ramallo told the Chamber that they became aware of the existence of public documents that prove that the Ternium company contaminated the groundwater and the course of the Paraná River with heavy metals.

The contamination generated would be the probable cause of several diseases suffered by the residents of the place, as well as the death of a six-month-old child from congenital heart disease.

In their complaint, neighbors add that they used groundwater until they began to suspect the water was contaminated. They also denounce contamination with polychlorinated biphenyls (PCBs) because the company stored transformers and tanks containing this highly toxic substance on natural land.

In his opinion, Federal Prosecutor Pleé stated that they contributed “elements that contribute to the contamination of the waters of the Paraná River, whose course reaches the provinces of Entre Ríos and Buenos Aires.” In turn, in the opinion of the Chamber, Judge of Cassation Ana María Figueroa stated that “Consideration should be given to the relevance of the matter reported, insofar as damage to the environment by the use of hazardous waste provided for in the standard harms the ecosystem and affects, at least potentially, the health of the inhabitants. This is because the gradual destruction of the ecosystem in which we live has the immediate effect of deteriorating human health.”.

The lawyer representing the affected neighbors, María Gimena Viviani, specified that the contamination tests are objective, serious and relevant.

According to the lawyer, the records show that the Environmental Crimes Department of the Federal Police collected water samples from the Paraná River in the area where the denounced company collapsed, and that the corresponding analyzes by the official laboratory confirmed that there is a high degree of contamination with heavy metals, mainly nickel, copper, lead and chromium, all at levels higher than those allowed by current regulations.

The Federal Police report also indicates that these values ​​are harmful to aquatic life and that they represent an unacceptable risk to human health.

Complementing this dramatic panorama, the former OPDS —today the Ministry of the Environment of the Province of Buenos Aires— detected that these same heavy metals were also found in the groundwater of the subsoil of the property where the Techint group company has its industrial headquarters. installations.

The families affected by the actions of the Ternium company include artisanal fishermen who saw their activity severely affected by contamination with hazardous waste produced. In addition, the affected riverside zone was declared a native forest of maximum protection by Law 14,888.

Environmental contamination in this area of ​​the Paraná River is a widespread concern that has deepened in the last decade.

For this reason, environmental organizations such as the Paraná River Basin have asked the Federal Court for a precautionary measure to protect this area of ​​great environmental value, where the presence of native forests and swamps in the Paraná Delta predominates. It is expected that in the coming days the Federal Chamber of Rosario will decide on this urgent request.

Paolo Rocca and the Techint group, prosecuted in several countries for corruption and contamination

This judicial setback adds to the complex scenario that the Techint group is going through in several countries. Last March, Italian prosecutor Donata Costa asked for four years in prison for Paolo Rocca and two of his relatives who are also directors of the Techint Group for the crime of international corruption in events that took place in Brazil involving the company Tenaris, owned by the same group.

However, the businessmen were benefited by the Milan Court, when it declared itself incompetent to judge the crime of corruption for facts that occurred in South America, thus avoiding conviction without having been acquitted.

The same international corruption plot was investigated, on this side of the ocean, by the US Securities and Exchange Commission (SEC), which put Tenaris under scrutiny for violating a US anti-bribery law – the Corrupt Practices Act. scheme that involved agents and employees of its Brazilian subsidiary.

However, on June 2, the Techint group company settled the charges, neither admitting nor denying the findings of the SEC investigation, agreeing to pay $53,100,338 in restitution and interest, as well as a $25,000 fine. 000 to resolve the matter.

In Brazil, in addition to accusations of corruption by bribery, the Techint Group causes environmental conflicts similar to those in our country.

This is the case, for example, of the Rio de Janeiro Industrial Plant, located in the Santa Cruz neighborhood, “Companhia Siderúrgica do Atlântico” Ternium CSA, against which there are also serious allegations of air, soil and water pollution of Sepetiba Bay, a situation similar to that denounced by neighbors affected in the province of Buenos Aires on the banks of the Paraná River.

From Somisa to Ternium: the double appropriation of the public

As in so many cases of large companies in our country, the origin of Ternium Argentina is inseparable from the looting of the State perpetrated by large corporations under the umbrella of the privatization reforms of the 1990s.

In 1992, as part of the scrapping of the State that at times pulverized the capital accumulated by generations of Argentines and Argentines, the Techint group of the Rocca family kept Somisa (Sociedade Mixta de Siderurgia Argentina), a state-owned steel company that had been created in 1947.

Then, in 1960, Somisa inaugurated its “flagship”, the General Savio Factory in Ramallo — where the Ternium Factory now operates — becoming one of the largest industries in the country and in South America.

In 1990, as a prelude to its privatization, the national government intervened in Somisa, appointing different personalities from the business and union world as auditors, Hugo Franco, Juan Carlos Cattaneo, Jorge Triacca and, finally, María Julia Alsogaray, who would be responsible for the final liquidation. .

At the time of the intervention, Somisa was among the 30 companies with the highest annual turnover in the country and ranked first in terms of contribution to aggregate exports of steel products.

The interventions were characterized by generating a significant economic and financial deficit that provided sufficient elements to justify its transfer to the Techint Group, for a negligible sale price.

The Costs of Hazardous Waste Pollution

The serious facts of contamination with hazardous waste that reflect the criminal case against Ternium illuminate a less explored, but no less significant, side of the appropriation of public assets by concentrated capital.

The cost of damage to ecosystems and their essential services is charged to society as a whole, while this outsourcing increases corporate profits. It is the affected neighbors who face, suffer and pay the consequences of environmental degradation on their own health.

The costs also fall on all taxpayers who with their taxes finance the health system that must take care of the treatment of diseases caused by pollution.

The court’s decision gives rise to new hope that, for once, fundamental human rights deserve the priority they deserve in the face of the interests of capital.

ENG vs SA: England announce their playing XI for the first test against South Africa