The mummies of ten crocodiles have been stored for over two millennia in an intact tomb in southern Egypt. This is an extraordinary discovery, as it is one of the rare occasions on which specialists have been able to study this type of remains in situ and with modern methodologies.

Crocodiles predate the time of the Ptolemies, so they have been buried for over 2,300 years.

Researchers from the University of Jaén found the tomb located in the Qubbet el-Hawa necropolis in Aswan in 2019. Inside were five skeletons and five skulls of large crocodiles, which were analyzed by archaeologists from the Royal Belgian Institute of Natural Sciences in Brussels. In this same area the governors of the southern border of Egypt were buried, but the crocodiles date back to before the Ptolemies, that is, before 304 BC. ç.

According to experts, it is very possible that these crocodiles served as intermediaries between humans and the god Sobek, god of water and fertility, often depicted with a crocodile head. This deity was very important in the city of Kom Ombo, just 50 kilometers from Aswan. Indeed, Kom Ombo was an important center of crocodile worship, but the same was not known to be the case in Aswan. 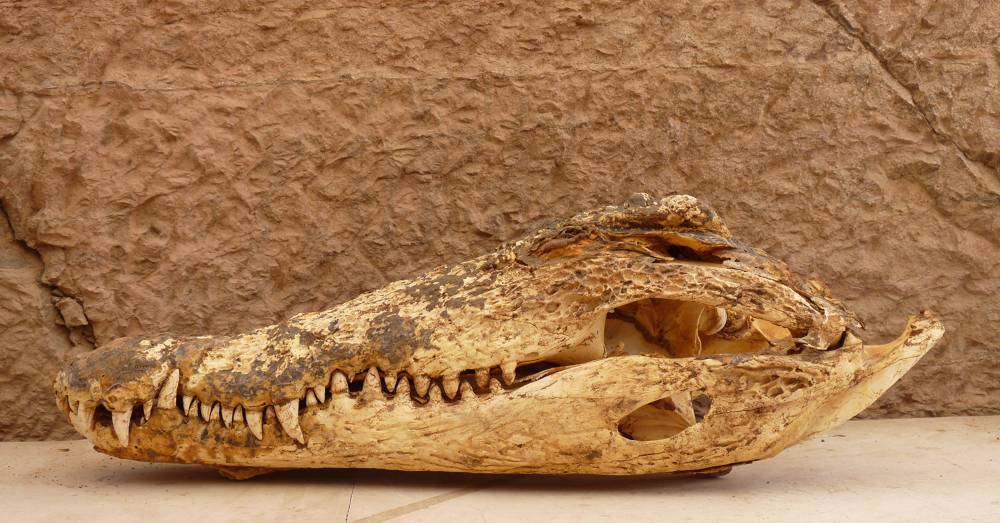 One of the crocodile skulls found. / University of Jaén

“More than 20 crocodile mummies burial sites are known in Egypt, but to find 10 well-preserved crocodile mummies together in an intact tomb is extraordinary,” says Belgian researcher Bea De Cupere. “Of most mummies collected by museums in the late 19th and early 20th centuries, often descendants, we don’t know exactly where they came from,” he specifies.

Finding 10 well-preserved crocodile mummies together in an intact tomb is extraordinary.

Archaeologists at Qubbet el-Hawa found traces of flax, palm fronds and rope, associated with some of the crocodiles, indicating they were once wrapped. However, bandages were eaten by insects in ancient times.

Experts point out that the animals were not covered with large amounts of resin or bitumen, as was common in more modern times. This fact indicates that they are older than most mummified crocodiles found so far. Furthermore, it also allowed researchers to measure and study these specimens in depth.

The animals were first buried in sand pits and then transferred to the necropolis.

The smallest crocodile is 1.8 meters long and the largest 3.5 meters. They belong to two different species: the Nile crocodile and the West African crocodile. Three skeletons were nearly complete, while the other two were missing several parts. “The crocodiles were buried elsewhere, possibly in sand pits,” notes De Cupere. “This allowed the crocodiles to dry naturally. The remains were then exhumed, wrapped and transferred to the tomb at Qubbet el-Hawa. Parts of the body must have been lost during packaging and transport.”

Iconographic knowledge shows that crocodiles were mainly caught with nets. No kill marks were found on crocodiles from Qubbet el-Hawa. Crocodiles may have drowned, suffocated or overheated from being exposed to the sun for long periods of time.

stones in the stomach

One crocodile was so well preserved that the gastroliths were still present. These are stones in the intestines that help crocodiles stay balanced in the water. The stones indicate that the crocodile was not cut open to remove the intestines. This is an exceptional discovery due to the rarity of preservation of bodies, which confirms that the Egyptians were capable of sacrificing animals that they would later dedicate to the gods.