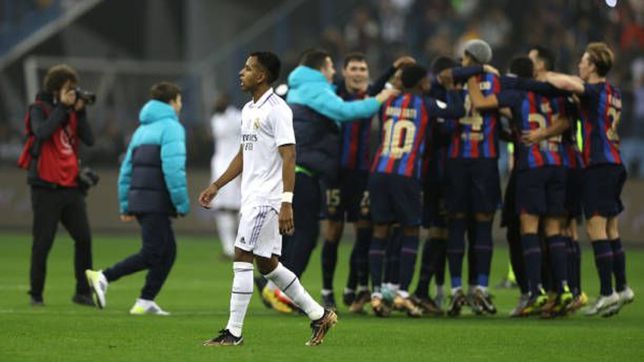 And Madrid bled. He came down from the crest of the wave and plunged into a sea of ​​doubts. Arabia, the second step in the dream of the Sextet, ended up decreeing a state of uncertainty. Stumble or end of cycle? That is the question. The debate aims to go long, but the solutions must be immediate (This Thursday another competition may die, the Cup, in La Cerámica). Ancelotti checks his hand for aces; of loosely pressed keys that can change the face of the team. And he has them.

Perpetual player number 12… could he enter the eleven? He has never finished doing it solidly. After several seasons bidding with Asensio on the right wing -in the end, neither managed to win the battle over the other, it was a pulse of comings and goings-, Valverde arrived and sat the two down. This course has established itself as an alternative to Benzema; the problem, the same as always, the ‘alternative’ label. Before the low flight that the Falcon is signing since the World Cup (in the final he only won one of the five duels and lost seven balls), Ancelotti could bet on him and give him the right wing. This season takes eight goals and five assistsdirect course to pulverize his best records (nine goals and ten assists, last season).

He started the final from the bench, but it was on everyone’s lips. Rudiger’s party erratic in the first goal (he failed at the start) and in the second (the band player went to cover, instead of the area player), he fueled the debate about who should be higher in the pyramid. Nacho spoke sincerely in the semifinals: “Side or center? What makes me happy is playing, regardless of the position. I just want to play”. And the truth is that the numbers are devastating: He has only played 27% of the minutes this season (642′). Very far from the records of Alaba (1,806 ‘), Militao (1,600 ‘) and Rüdiger (1,435 ‘). between madridismo surprise his ostracism and more and more are asking for his ‘return’.

His situation is very similar to Nacho’s: He has only participated in 26% of the minutes of the entire season (628′). In the Champions League, during the ‘key’ games, he played an average of 15 ′; and in the League, of the 16 days, he has only played more than 60 ‘in two (Vallecas and Valladolid). He is more missing than ever. And that the numbers row in his favor: participate in a goal every 100 minutes (He has three claws and three assists). Last season he finished as the team’s third leading scorer, with 12 goals. But since March he has been losing strength, prominence; turning off Could your best version come back? The crux of the matter. His contract ends this summer and if he wants to continue, he must hit the table.

It takes 408 minutes. There are only four teammates who have participated less: Mariano (25′), Odriozola (51′), Vallejo (55′) and Hazard (296′). He lives day to day with a renewed mentality: working in silence. Waiting for an opportunity that this Sunday, a problem, came to him abruptly: With the game 0-2 and Madrid in the UCI, Ancelotti chose him to take over from an unrecognizable Modric. He put attitude and determination, but he made a serious mistake that ended the final (a horizontal pass that preceded the 0-3). He was able to pay the price of going from nothing to everything, all at once. From barely counting, to playing the hottest night. Demand regularity, more presence in a midfield that seems to ask for breaks. He also ends contract this summer. Betis, as AS told, continues to lurk: if he does not renew, he could ‘catch’ him for free.

The very young right back (18 years) is still waiting for his opportunity: He has not yet made his debut with the first team. He had minutes in preseason, when Carletto, after taking it to the tour of the United States, lined it up against America. But in an official match, nothing. The club will execute its purchase option (10 million) and will be a property player. And it is that the flashing of Carvajal, added to the injury of Lucas Vázquez (he will be in the infirmary for a month and a half) and the invisibility of Odriozola, could speed up his premiere. As Militao, Rodrygo and Vinicius already have dual nationality, they have a free hand to occupy a non-community place. I could play. The right side of the future is getting closer.

But in the quarry there are more options. Without going any further, the alvaro rodriguezthe Bull who is currently playing the South American U-20 with Uruguay. His performance has been such that he has been playing ahead of Iker Bravo all season. Raúl has no doubts with his killer. Ancelotti gave him his debut against Cacereño and acknowledged at a press conference that he is following him “very closely”. Faced with goal problems, the most immediate solution could be at home (At least, as an alternative when matches get stuck). And in the middle, two diamonds: Nico Paz (also in the South American Sub-20, but with Argentina; he has not yet debuted with Madrid’s first team) and arrivals. Young players hungry to demonstrate at a time when hunger is already a lot.