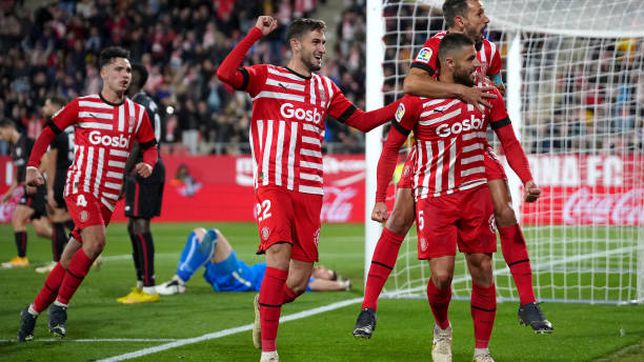 If Míchel is insisting on something this season to try to survive in the First Division in the best possible way, it is reliability and quality in the areas. Being a safe team at the back allows attackers to perform calmly and, without a doubt, Improving defensive performance is one of the objectives when the League resumes after the break for the World Cup in Qatar. In terms of goalscoring ability, in Girona they can rest easy because, With 20, they are the sixth Primera team with the most goals in favor. In this aspect, the numbers are from a club that is fighting to enter Europe, but the problem is what happens in the area itself. And the most striking fact is that 14 league games have been played and Girona has conceded goals in all of them.

Not leaving a clean sheet in First Division is placing too much weight in the backpack because to score it forces you to do, at least, a little bit. And this, sometimes, is an impossible mission. Hence One of Míchel’s main focuses of attention on his return to work will be to provide greater security to his defense and to the goal. The goal has already changed, Paulo Gazzaniga replaced Juan Carlos, and it worked because the Argentine chained matches with interventions of great merit and that gave points, although a clean sheet must be achieved. 14 League games receiving, at least, a goal is something that hurts in the dressing room and they hope that this break will serve as a ‘reset’.

It is, along with Elche, the only team in the category without clean sheets and this is preventing him from flying even higher. It is true that in recent days he managed to stop the bleeding of the wins, such as those suffered against Real Sociedad (3-5) and Almería (3-2), but the 22 goals conceded in 14 games make it have a negative difference: -2. Balancing it and going on to have a positive balance is what Girona wants, who, despite all this, are in permanent positions (13th) and with a five-point advantage over the relegation places.