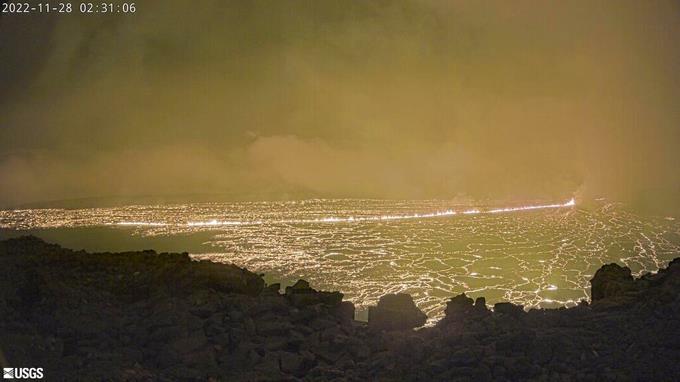 Lava began to flow around midnight Sunday at the summit of Mauna Loa, one of five volcanoes in Hawaii Volcanoes National Park, the United States Geological Survey (USGS) told 23:45 on Sunday (09:45 GMT on Monday), about 15 minutes after the start of the eruption.

"At this time, the lava flows are contained within the summit area and do not threaten hillside communities."the USGS said on its website, calling on area residents to review preparation procedures.

While the eruption on the main island of this remote US state in the Pacific remains within the basin at the top of the volcano, called the caldera, "lava flows can move rapidly downhill"warned the USGS.

On Monday morning, the USGS Volcano Monitoring Office tweeted: "Lava appears to have flowed out of the caldera, but for now the eruption remains confined to the caldera.".

He added that the Hawaii Volcano Observatory is in contact with emergency management personnel and will conduct an aerial survey of the 4,168-meter-high volcano as soon as possible.

Hawaii authorities said no evacuation orders have been issued, though the summit area and several roads in the region were closed.

A USGS webcam on the northern edge of Mauna Loa’s summit showed long, bright eruptive fissures within the volcanic crater, contrasting against the darkness of night.

Mauna Loa, the largest on Earth, has erupted 33 times since 1843, according to the USGS.

The most recent eruption, in 1984, lasted 22 days and produced lava flows that reached as far as four miles from Hilo, a city currently home to about 44,000 people.

Satisfaction in the squad for the match against Real Madrid