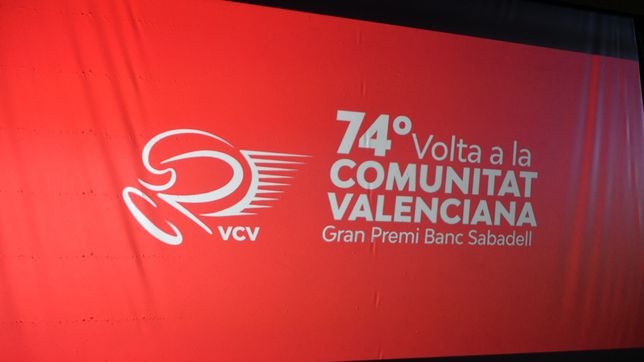 The organization of the VCV – Volta a la Comunitat Valenciana Gran Premi Banc Sabadell unveiled this Thursday the official route of its 74th Edition, which will take place between February 1 and 5, 2023. The Mar Rojo de l’Oceanogràfic Auditorium has hosted a presentation ceremony in which the five stages of the race have been announced. A route that will start from Orihuela and that will end as usual in Valencia, but with an unprecedented goal in front of l’Oceanogràfic. In total, five stages, two in the province of Alicante, one in Castellón and another two in Valencia, which will once again serve as a showcase for the whole world of the cycling paradise that is the orography of the Valencian Community.

The Alicante town of Orihuela will host the official start of the VCV 2023 next February 1st. A first stage that will end in Altea after almost 190 kilometers of medium-mountain route, with steps through the ports of Coll de Rates and Bèrnia. A first opportunity right from the start for the climbers, the great favorites for the final victory thanks to the absence of individual or team time trials.

Stage 2 will also pass through the province of Alicante, starting in Novelda and ending in Alto de Pinos de Benissa. Almost 180 kilometers of route and up to seven mountain passes. The area is usually the usual destination for the teams to carry out their pre-season concentrations in winter, so riders know the terrain well and will know where to attack to get the most out of it. This stage promises spectacle. On February 3, the third stage will take place between Bétera and Sagunto, already in the province of Valencia. Another mid-mountain stage that will climb well-known ports such as Oronet and Garbí and that it can be good to consolidate a getaway that reaches the finish line.

The main course arrives on Saturday, February 4, with the queen stage through the province of Castellón. Departure in Burriana and finish, also unprecedented, in the Sanctuary of the Holy Cave, in Altura. Five mountain passes well distributed among the 181 kilometer stage that should be decisive for the general classification. However, the organization led by Ángel Casero has prepared changes for the last stage, the usual one between Paterna and Valencia. What used to be a guaranteed massive sprint arrival may not happen this year with the Oronet climbs and, above all, to La Frontera, an unprecedented port that has been able to be added to the route after the resurfacing of its road. If the general arrives tight on the last day, nothing will be sentenced until the finish line is crossed at l’Oceanogràfic de València.

«As an organization we love to show the world the wonders that we have in the Valencian Community. That is why we always try to recover or incorporate new mountain passes. This year we have achieved it with the Alto de Pinos in Benissa or La Frontera in the Sierra Calderona, and we are convinced that the end in the Sanctuary of the Holy Cave, in Altura, is going to be spectacular”, has recognized Ángel Casero, General Director of the VCV – Volta a la Comunitat Valenciana Gran Premi Banc Sabadell.

For his part, the Deputy Director General and Eastern Territorial Director of Banco Sabadell, Fernando Canós, has pointed out that “for Banco Sabadell, being part of the VCV is a real privilege, since it allows us to be a leading part of a project that adds up in every way. High meeting, high spectacle, high sporting prestige for the Valencian Community, and of course continues to add links and roots of the entity to our territory ».