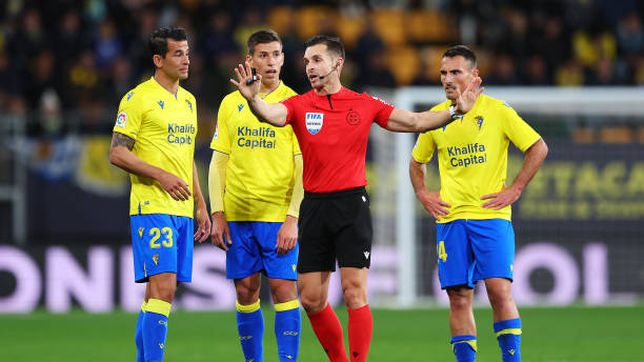 The Committee of Referees comes out after the controversy of Cádiz-Elche. Iglesias Villanueva, VAR of the match, did not review an offside in the action of the Elche tie and they have separated him from the Levante-Atlético Cup match. A serious mistake that was decisive for Cádiz not winning and for which Del Cerro Grande, the main referee, had to apologize to the local coach. A day later, the CTA acknowledges the error and announces “the strictest internal disciplinary measures” for those involved. But they also point to LaLiga, to which they claim the semi-automatic offside to put an end to this type of human error. The institution chaired by Thebes responds with a harsh attack against the arbitration collective and the Federation: “Stop shirking responsibilities” and “blaming human error on the absence of a semi-automatic force is trying to deceive fans.”

“Finishing with human error is not possible, but it is possible in offside if the semi-automatic tool is applied. For this reason, we invite the LNFP (LaLiga) to implement the semi-automatic offside technology after the experience carried out by the RFEF in the last Spanish Super Cup, which avoids any type of failure in decision-making regarding this action of the game through the activation of a series of alerts that makes the tool infallible”, exposes the Federation in a statement after the controversy. And they add:In this sense, from the CTA we announce that we will resume talks with the LNFP. Spanish football deserves to continue growing in a cutting-edge context to avoid situations that can be corrected with the application of technology”. A technology that premiered in the Spanish Super Cup held last week in Saudi Arabia. A tool that helps to instantly detect when a player is offside, speeds up the game and significantly reduces human error.

Finally, the Federation and the CTA announce that the semi-automatic offside technology, which they claim for LaLiga, will be installed in the Copa del Rey final: “The semi-automatic offside will also take place in the final of the Copa del Rey, since the implementation of This technology can only be carried out in the First Division Champions League stadiums and not in the rest of the First and Second divisions”.

The good use of this technology could bring it closer to the First Division, as the Federation publicly claims. The referees are prepared for this and most of them already have enough ease with this tool to use it in European competitions, where the Spanish are benchmarks and are in all the big events. Javier Tebas, president of LaLiga, has already dropped that he is not contrary to its use: “VAR is the responsibility of the Federation. If it works well in the Super Cup and it is verified, we advocate the best technologies”. Now, the turn is up to the clubs, who pay for these tools. They must decide whether or not to implement it in the competition. As they already decided not to do it with goal technology (the well-known Hawkeye) considering that VAR was enough. But on this occasion, everything points to the fact that the semi-automatic offside will arrive for the next campaign, since the employers are interested in having it. LaLiga and the Federation have already started talks to renew the referees’ agreement, which both parties trust will go ahead without problems. In addition, in these meetings the semi-automatic offside will be dealt with, for which the RFEF demands that the meetings be resumed as soon as possible.

Although everything is not as nice and cordial as it seems and more after the announcements of this Tuesday. LaLiga responded to the Federation with a harsh attack: “From LaLiga we regret the grotesque statement from the CTA sent by the RFEF, in which far from assuming responsibilities or apologizing, they try to shift the blame to an organization completely unrelated to arbitration decision-making How is La Liga? We urge the CTA and the RFEF to carry out self-criticism and stop evading responsibilities in arbitration decisions, in the face of repeated complaints from Spanish football professionals. And they continue: LaLiga has great respect and appreciation for referees in Spain. So much so that, even though the management of professional soccer referees corresponds to the CTA through the RFEFeveryone arbitration costs (salaries, social security, VAR technology, etc.) They are paid for by LaLiga and the Clubs, with Spanish referees being the best paid in the world”.

LaLiga, in its response, also emphasizes the improvements it has proposed to the CTA: “We have been proposing improvements to the VAR for some time, such as the creation of a specialized body for this, different from field referees. However, the RFEF has recently proposed a regulatory amendment to limit a specific VAR referee being in the position for more than two years, which LaLiga has strongly opposed.

The employers also pointed to the semi-automatic offside: “No league in the world currently has semi-automatic offside technology. Nevertheless LaLiga has been working for two months and studying the option of integrating the semi-automatic offside system. In fact, LaLiga’s Director of Competitions visited the FIFA technology center during the World Cup in Qatar where the VAR was located to learn first-hand how it works. Likewise, LaLiga held a meeting with Hawk-Eye, the RFEF’s VAR technology provider, on December 13 with the same objective of delving into this new technology. And he wanted to clarify that the Cádiz-Elche error was not due to the absence of this technology: “VAR has been installed in Spain for around 4 and a half seasons, being applied to date in 3,345 matches between LaLiga Santander and LaLiga SmartBank, in which errors of the magnitude of yesterday’s match between Cádiz CF and Elche FC have rarely been seen, which means that up to now the system has worked, beyond the fact that LaLiga does and will do everything on its part for the continuous improvement of the system. Blaming human errors on the absence of a semi-automatic out is trying to deceive fans, players, coaches, club presidents, etc., since with this system there can also be human errors if the protocol is not followed. The controversial play by Cádiz CF-Elche FC yesterday was not detected/checked at any time by the international assistant referee, neither by VAR nor by AVAR”.

Science trips – Behind the mathematicians of Al-Andalus