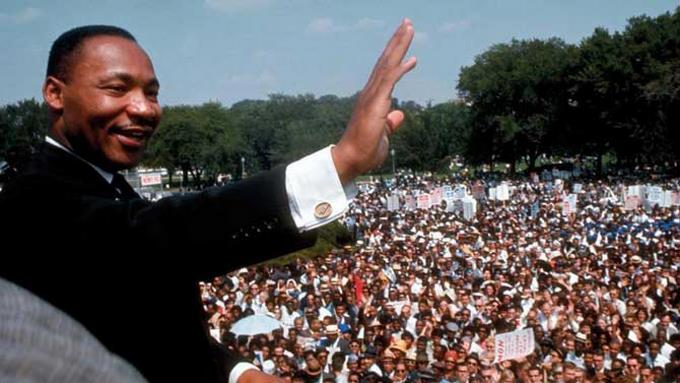 Thousands of Americans remembered Martin Luther King this Monday on the holiday that commemorates what would have been his 94th birthdaya day of vindication against the violence caused by weapons and in favor of unity and work in the same direction.

"To move forward we have to go together. Let us be guided by the light of Dr. King (…) there is nothing beyond our capabilities if we do it together"pointed out the US president, Joe Biden, who took part in one of the activities organized to remember the defender of civil rights and his legacy.

Biden participated in an event organized in Washington by the National Action Network association in which the former speaker of the Lower House, Nancy Pelosiand Arndrea Waters King, wife of Martin Luther King III, the eldest son of the Nobel Peace Prize winner (1964) and Coretta Scott King.

"I am ready to work with a new Republican House and a Republican Congress to make progress for the people of America."added the president, who is not going through his best moment due to the scandal of the classified papers that have appeared in recent weeks at his home and office.

This event took place one day after the president participated in a mass in memory of Luther King (1929-1968) at the iconic Ebenezer Baptist Church, located in Atlanta (Georgia), where he served as pastor from 1960 until his assassination. in 1968 and where his funeral was held.

With a speech in which he spoke of the "critical moment" that the United States and the world are living and how necessary it is to continue fighting for democracy, Biden became the first active US president to speak at a Sunday mass in this temple.

As in many American cities, several activities were held in Washington DC, including a parade of civil associations and a walk for peace to commemorate when, on August 28, 1963, more than a quarter of a million people participated in the historic March on Washington for Work and Freedom, after which Luther King pronounced the historic phrase "I have a dream" ("I have a dream").

Members of organizations in defense of civil rights participated in it, as well as victims of violence, including two mothers who lost their children to stray bullets while playing in the street, who have asked on a podium for tougher actions to control weapons.

In the opinion of William H. Lamar IV, pastor of the Metropolitan Church, it is important to remember who Luther King really was because "what America wants us to do is think of him as a Santa Claus figure cheering on the American empire"he pointed out to EFE.

"But he was a radical theologian who thought that doing the work we are called to do means that all of these systems must be reordered to specifically care for those who have least."he added.

His work "it is as prominent today as it was 60 years ago and is still alive in us, those of us who believe that freedom is a right of every human being."said along with several protesters who hold banners with the slogan: "fight and win. Racism, war, poverty, the three evils of society".

Among them is Charnal Chaney, who told EFE that he created a yoga company that promotes healing throughout the African-American community and seeks "teach them self-awareness, emotional intelligence, so that in that way they can control their emotions.

Luther King, he said, is one of the people he most admires, because "started at a young age and was willing to sacrifice and die for what he believed in". "It is inspiring to know that today we can do more for our community and that it is not as difficult to fight to improve it as it was back then."it states.

Today’s activities are celebrated within the framework of Martin Luther King Day, a federal holiday, which has been celebrated since the 1980s on the third Monday of January.