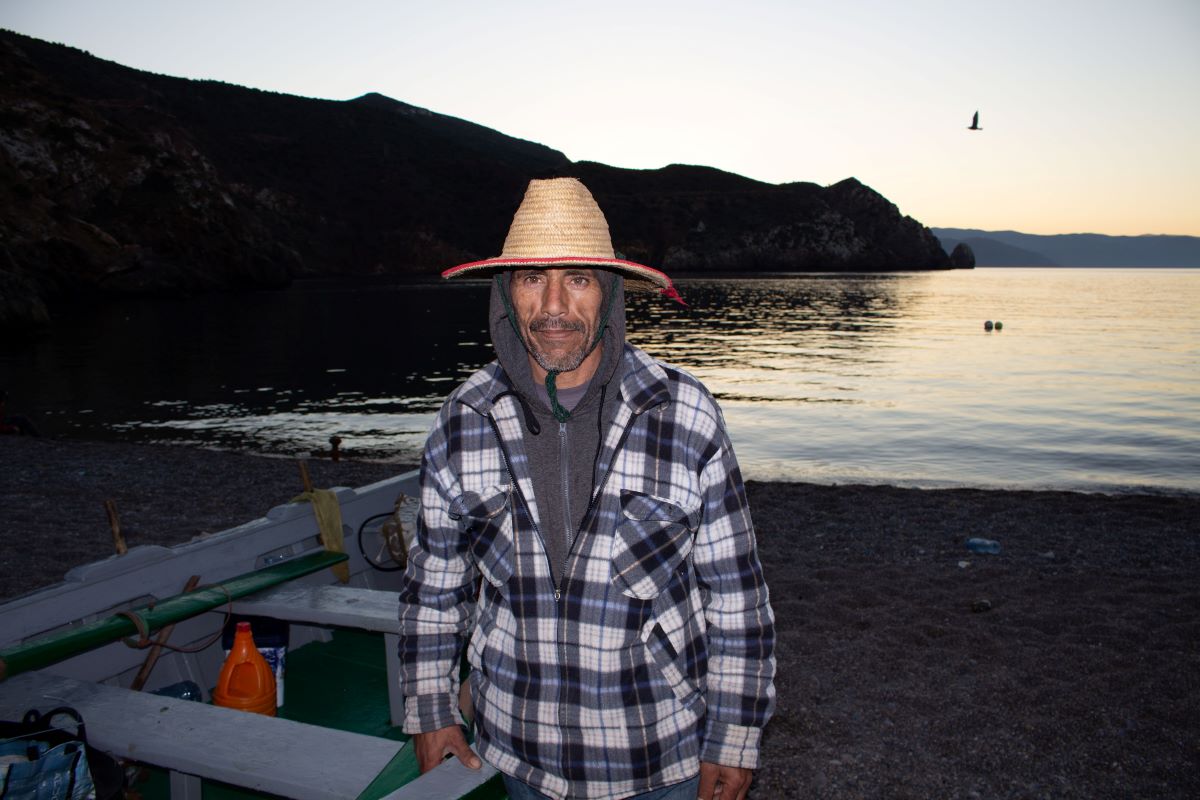 Butterflies don’t know what they organize every time they take off. This little story, which takes place in a tiny place in the south of the Mediterranean, begins with a fisherman who asked for water for his town. So he flapped his wings. A cascade later, in thousands of small places in the Mediterranean there are reasons for hope.

The fisherman’s name is Fouade, which means ‘heart’ in the Arabic language, and his coastal town has no roads. It belongs to the Bades fishing community, about 40 fishermen who feed their families thanks to fishing. Artisanal fishing is the fishing they know, the one that their parents taught them, their grandparents, and now they teach their children.

the rif in amazing language means ‘mountainous area’, and extends from Tangier to Saidia, Morocco’s border with Algeria, which is already closed.

If we enlarge the magnifying glass, Bades is located right in the navel of the Al Hoceima National Parkin the region of the tribe of bocoyathe straw hat makers who protect peasants from the sun, 150 km east of the Straits of Gibraltar, with a land and sea area of ​​485 square kilometers (including 190 square kilometers of sea).

The smallest border in the world 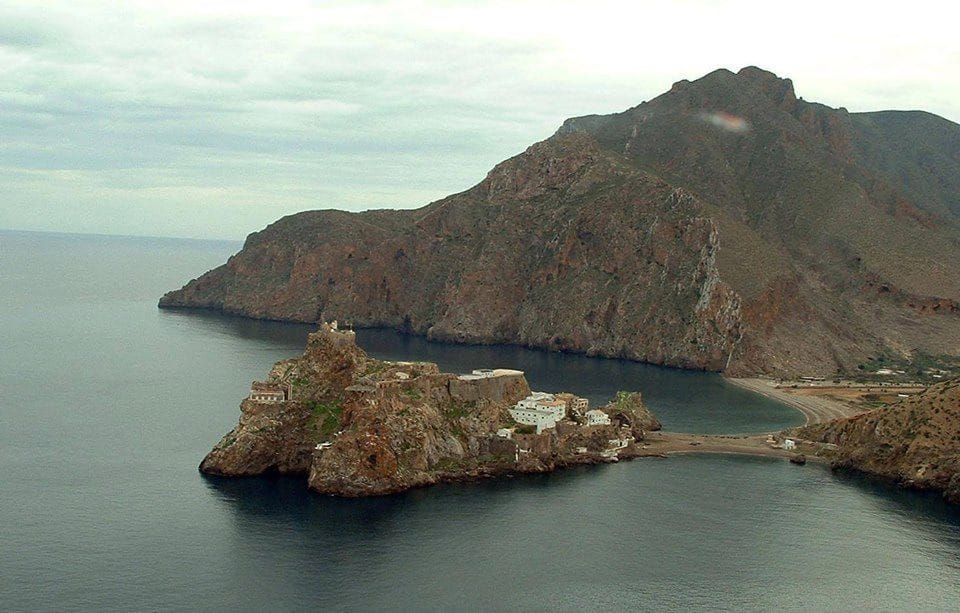 as part of the team midnight I reached Bades along a path that floods often destroy. On its coast is the Rock that the Spaniards call Vélez de la Gomera. It was originally an island, but an uncontrolled storm moved enough land to create a sand tongue that has connected the islet to the beach ever since.

A simple blue rope, 85 meters long, separates the legionnaires from the fishermen. We are on the Moroccan side and they tell us that we cannot jump rope. only seagulls do

the islet is square of spanish sovereignty, one of the many relics of a colonial past that persists out of context in the Moroccan present. It is occupied by the Spanish legion. Its emblem is painted on the rock and the legionnaires make Cooper along the beach without crossing the border. This boundary between Bades and the cliff of Vélez de la Gomera is the smallest in the world. A simple blue rope, 85 meters long, separates the legionnaires from the fishermen. We are on the Moroccan side and they tell us that we cannot jump rope. Only seagulls do that.

The day Fouade flapped his wings

Fouade and the fishermen of Bades had a problem: water. Drinking water did not reach Bades, you had to look for it in distant wells, sometimes on impassable roads. And the fishermen needed water for their watchtowers by the sea. So one day Fouade rose with determination, sought out Mohamed Andaloussi and asked for his help.

Mohamed Andaloussi directs the environmentalist NGO AZIR. AZIR means ‘lavender’, that robust plant with lilac flowers that perfumes the mediterranean forest. AZIR has been working since 1996 on sustainable development and environmental education in the Rif, developing numerous national and international projects, with its director, Mohamed Andaloussi, a well-known and respected voice inside and outside Morocco.

“Fauade’s request was a small project, but with an important value: water, which is a right”, says Mohamed.

From AZIR, Mohamed contacted a French NGO specializing in the supply of drinking water, L`eau Gemeau Solidarité and got 8,000 euros to start working:

“When the NGOs came to inspect the work, they discovered that the fishermen’s village, the families’ houses, had no water. They saw that it was more urgent to bring water to the houses in the village, not just to the fishermen, because the women, the families, the children were in the houses”, recalls Mohamed 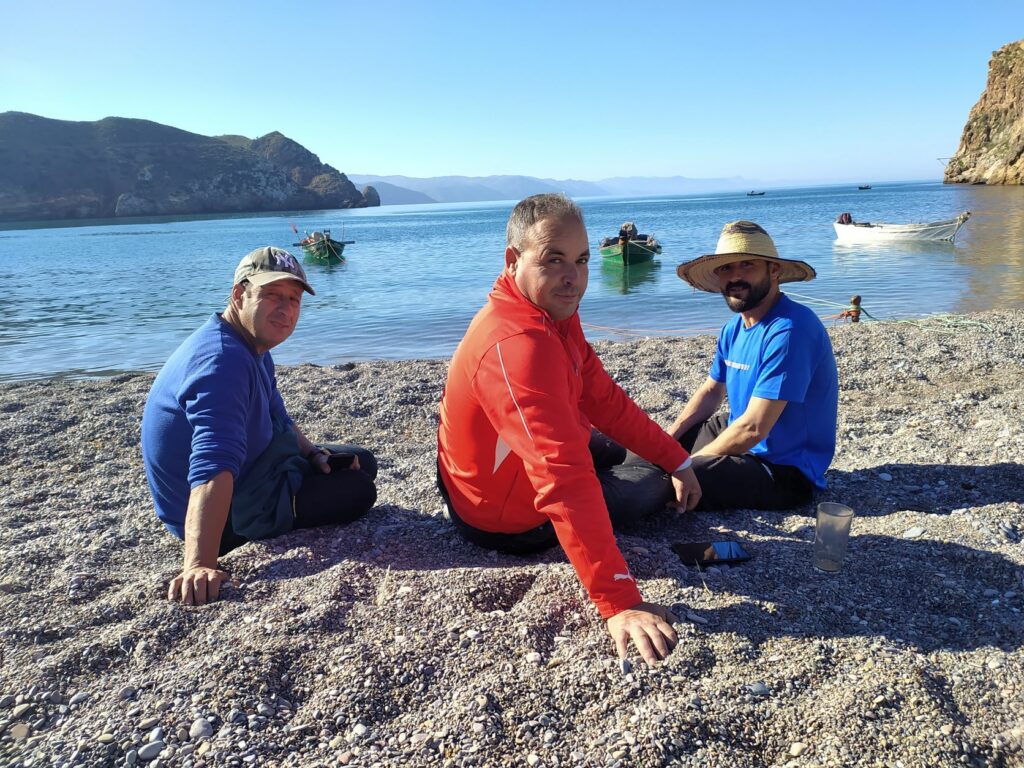 In the center, in red, Fouade. To the left of the image Mohamed Andaloussi, and to the right another of the fishermen of Bades. Photo by Ricardo Dominguez @Mednight

With the help of the French NGO, the involvement of international volunteers and many citizens of the city, they carried out a first phase: digging a community well, placing solar panels to power the pump that takes the water from the well to a raft, built on a hill, digging ditches and laying the pipe through which the water flows by gravity from the pond to the city. They took the gravel off the beach, put cement in the chamber, and with the little money available they bought the pump, the solar panels and paid for part of the raft.

“The inhabitants of the Rif are used to community work. We did it together”, says Mohamed. 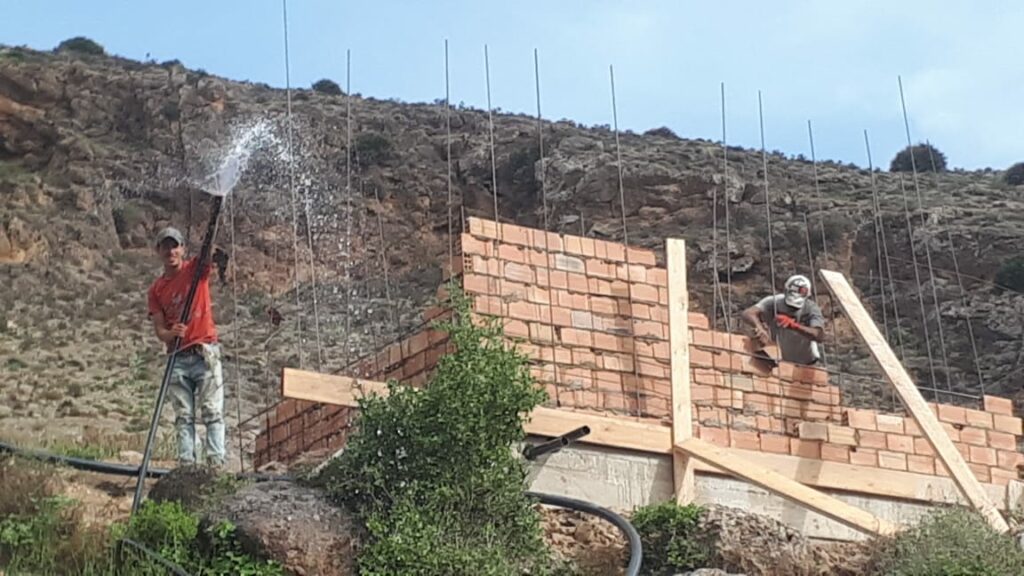 Water! During the construction of the raft, in the upper part of Bades. 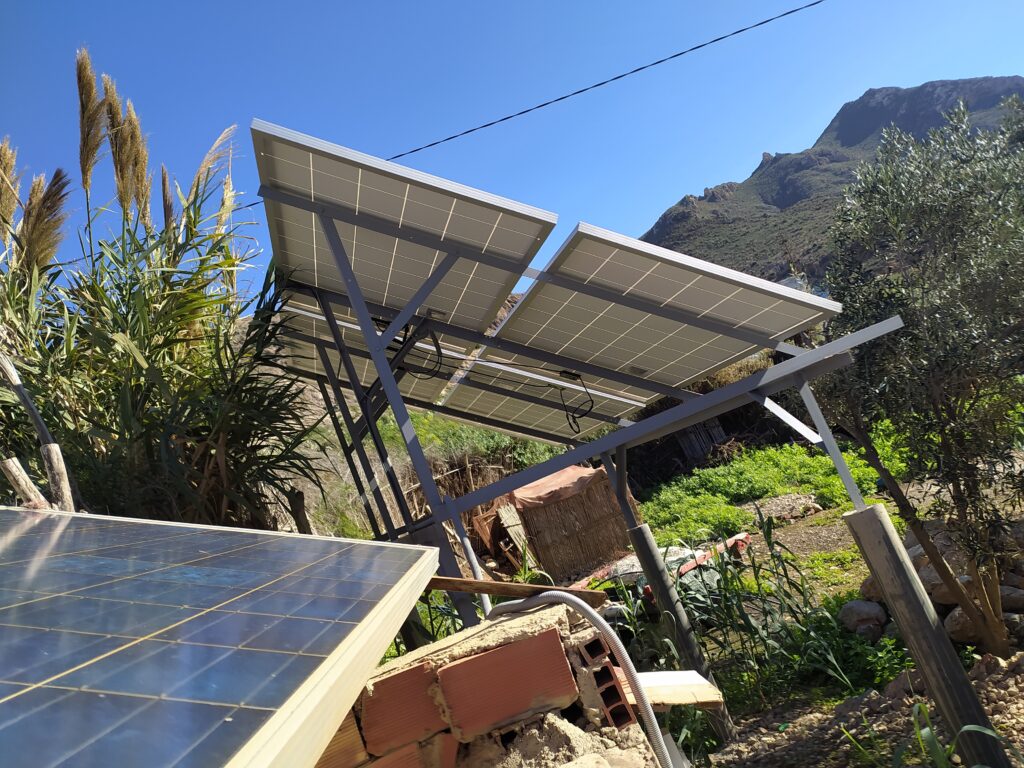 Solar panels power the well pump. The well is in a private house. They decided to do it this way so that it would always be watched.

At five the fishermen return

It’s December and at 5 pm the sun sets in Bades. At that time, fishermen come back.

The boats are small, measuring no more than five meters, with an engine between 8 and 15 horsepower. It’s octopus season. In Bades they fish with a system they invented here. The boat is carried along by the current and they use a triple hook on which they place the bait. The drag is in soft areas, sand or mud, the octopus attacks it and hooks on the jig.

Once the octopus season is over, they fish the chambel, a line of hooks with which they catch snappers, brecas and seabream. They also know the longline: a line of several meters with baited hooks. They put the longline on the bottom overnight and in the morning they take it out and find hooked fish.

It is a very selective fishing. They only catch big fish, those that can eat bait; their fishing capacity is small, because their boats are small, so they cannot travel great distances; They only fish during the day, come back at night, and if there are small waves, they cannot go out to sea. They rest more than they fish. This is exactly sustainable fishing.

“Compare this to intensive fishing, with boats that spend 24 hours fishing, dragging all kinds of fish, running out of everything, not entering the port, using freezers…”, explains Mohamed, and a rhetorical question escapes him: “Don’t you think is it worth preserving artisanal fishing?

Mohamed says he sometimes imagines the destruction of Bades, like so many other coastal towns.

“If traditional fishing is not valued, it will disappear, being a cultural, archaeological and historical heritage of this area and of the whole Mediterranean”, says Mohamed.

The small white and green boats of the fishermen of Bades reached the shore. Together they take them to shore and protect them. This afternoon they bring octopuses. There is a van waiting to pick you up to take you to Europe. Bades fishermen receive the equivalent of 6 euros per kilo of octopus. In the Madrid market, in the middle of Christmas, it was 45 euros per kilo. 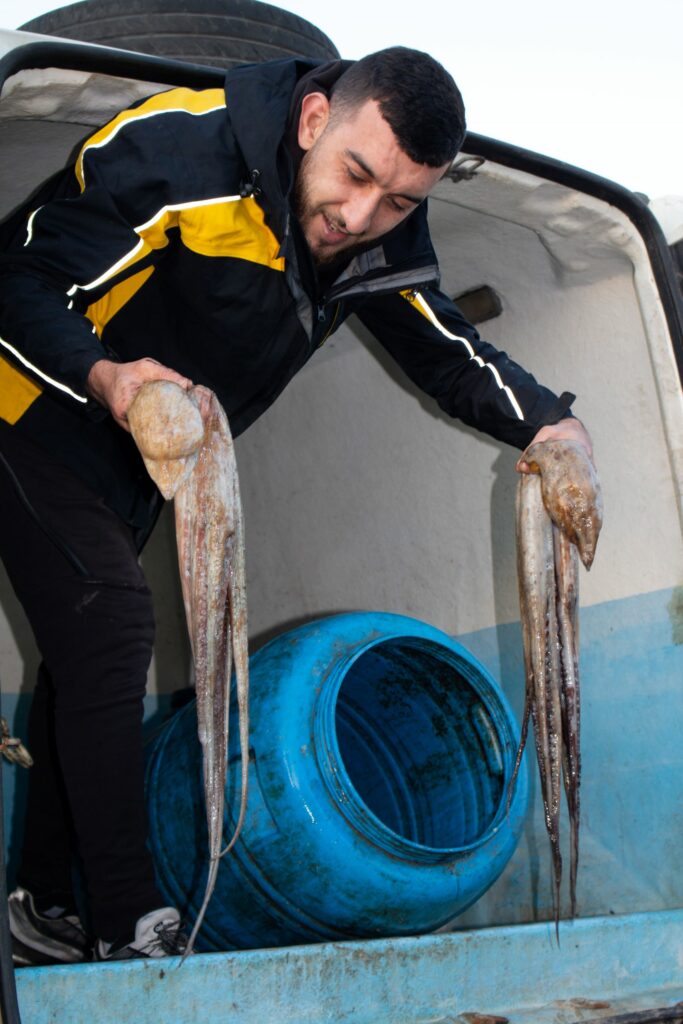 In a small van they collect all the octopus caught to take it to Europe. In the Rif you don’t eat octopus. Photo by Ricardo Dominguez @Mednight

Bades is all cities

Artisanal fisheries represent more than 84% of the total Mediterranean and Black Sea fishing fleet and employ nearly 62% of the workforce. Thus, Bades are all those small towns that still make a living from the sea, collecting fish almost by hand.

In 2018, the EU signed a 10-year regional action plan to promote sustainable artisanal fisheries in the Mediterranean and Black Sea region. The plan sets out measures to ensure the sustainable use of fisheries stocks and support the long-term economic and social prosperity of artisanal fishers and coastal communities.

THE ‘Regional Action Plan for Artisanal Fisheries in the Mediterranean and Black Sea‘ It is not mandatory, but it is the first international instrument dedicated to artisanal fisheries since FAO approved the ‘Voluntary Guidelines for Achieving Sustainability in Small-Scale Fisheries in the Context of Food Security and Poverty Eradication‘.

So in Bades they are not entirely alone. From AZIR, Mohamed wants to create a network of artisanal fishermen from the Mediterranean Sea, with people from Motril, in Granada, brotherhoods from Malaga and associations from Cádiz such as SoldeCocos.

“We want to let them know, help them to revalue artisanal fishing, give it the importance it deserves and that fishing has more economic value than industrial fishing. We want it to have a certification, although this requires a complex legal process”, explains Mohamed.

The Ultimate Goal: Beyond Bades 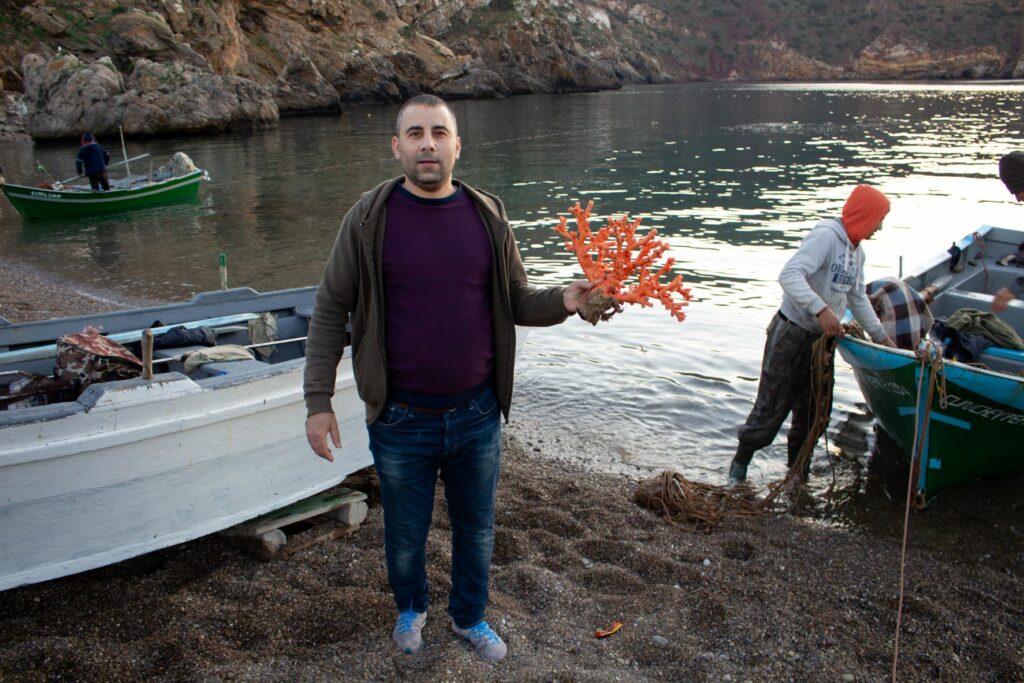 Al Hoceima National Park is a hidden gem, dotted with Riffian settlements like Bades and crisscrossed by dirt roads. Its isolation has helped preserve several endangered species, from its Thuja forests to an important osprey colony. Al Hoceima National Park preserves the last vestiges of the Mediterranean’s original biological diversity. And Mohamed’s goal, in addition to providing water to a city, is to protect the sea that borders the national park’s coast, and he fights for it to become a marine reserve. When it happens, if it happens, it will be necessary to delimit the fishing zones.

“Our ultimate goal is the reserve, and the work we’ve done in Bades will serve to earn the fishermen’s trust. If you’re going to delimit the sea, you’re going to have radical opposition from the fishermen, because you’re taking away vital fishing space. That’s why we need you to believe us, and if we can narrow it down and book it, we hope you will help us. If they trust us, they will believe us when we tell them that it’s worth it, that we’ll have to wait a little, but then the sea will bear more fruit. We have experience in Italy, Spain and other parts of the world. We need a lot of means, vigilance, paying the fishermen directly so that they don’t go out fishing too often, means that we don’t have right now. We don’t have money or personnel, what we have is the will of the people”.

And that’s how one fine day Fouade woke up with a determination: to ask for water for 40 fishermen in his village. He has moved his wings and the butterfly effect will one day make your city an example of hope.

In the dew of small things, the heart finds its morning and is refreshed. “The Prophet” (1923), Gibran Khalil Gibran

Report prepared for the Mediterranean Researchers’ Night, MEDNIGHT 2022, a scientific dissemination project promoted and funded by the European Commission under the Marie Sklodowska-Curie actions

In May 2008, AZIR received the ”WWF AWARDS FOR CONSERVATION MERIT” for its work in defense of the environment in the southern Mediterranean.