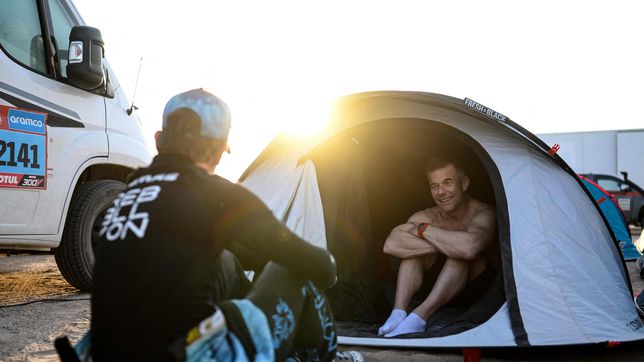 The Dakar once again faced the unknown, and yet it was more common than expected for the drivers. We had a roadbook in hand and the difficulty did not exceed level two (they had to explain to us how it worked), in keeping with all the previous stages. But at least the day of the ‘Empty Quarter’ was new for the Press that carries the L in registration. The room was not empty and for the first time, we were able to see all the riders who filled the bivouac in a completely different way to what we are used to. The caravans and the comforts stayed in Shaybah, here they ended up living like a special envoy who finds shelter in his tent and the image was, to say the least, curious.

Guys capable of interpreting a roadbook, opening the throttle and avoiding obstacles, met in groups of up to five drivers to find a way to pack the store. Your experience in the Dakar can be eternal but in camping, non-existent. There were those who preferred to hide their tent and mount the mattress in some jaimas where life came to life since the pilots reached the finish line. There were familiar faces, others not so much, and there was no shortage of an unexpected snack while in Saudi Arabia thanks to Santolino, who made the afternoon more enjoyable and the experience unforgettable. Although that last word could also perfectly define this Dakar.