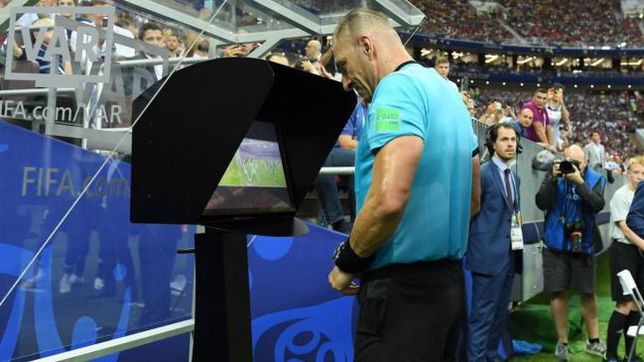 The IFAB adopted a number of new implementations to the game at its Annual Meeting in London, where it discussed regulatory changes that may occur in the coming years. The most prominent is that the referees will explain their VAR decisions through the public address system of the stadiums, NFL-style. The first test will come in the Club World Cup to be held in Morocco next month, with Real Madrid as one of the participating teams.

The referees will announce the reason for their VAR decisions to the stadium public and the sound will also be broadcast on television through their microphone. It is part of the test authorized by the IFAB and that could also be applied in the women’s World Cup in the summer. The public explanations of the referees are also used in rugby, for example, and are very clarifying to understand the reason for their decisions. The IFAB considers that in this way a video arbitration system can be better explained, which after a few years has not been very pervasive.

“At the meeting it was agreed to communicate live by the referees of the decisions related to the video assistant referee (VAR) to the public, both in the stadium and on television, which will be tested for 12 months in international competitionsand which will initially be filmed at the FIFA Club World Cup in Morocco, which begins on February 1,” the IFAB said in a statement.

Until now, the referee had never explained his decisions in public and had remained in the background of the game. In this way, it will go directly to gain attention, already in a directed way, on issues as relevant as those applied by the VAR. It must be remembered that the IFAB trial periods for most of its proposals are two years and that they must be implemented in tournaments such as Club World Cups, youth and women’s to see their proper functioning.

Another issue discussed at the Annual Meeting was to use standing time instead of running time. It is one of the three proposals that he is considering to improve the effective time of the matches, in addition to the extension of the additions, as happened in the World Cup, and the improvement of the current system. The IFAB is the one that regulates the rules of football. It is made up of the four British associations, which have one vote each, and FIFA, which has four, and any proposal must have six votes in favor out of eight to be definitively approved.