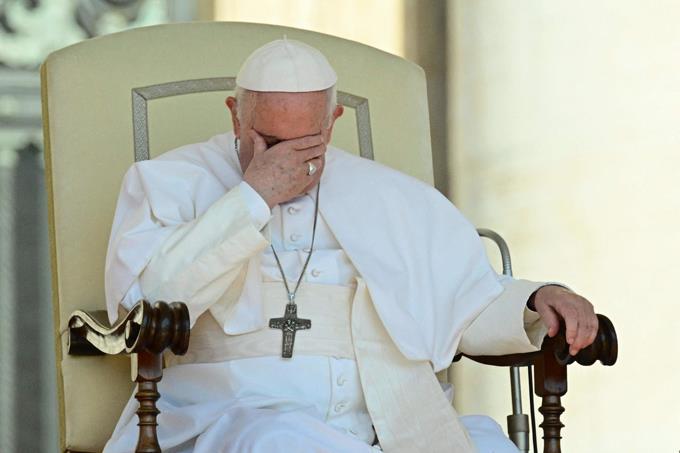 Pope Francis asked today not to forget Ukraine or "the suffering of that martyred people" at the end of the general audience held in Saint Peter’s Square in the Vatican and where he was accompanied by three children from that country on his initial journey among the thousands of faithful gathered to listen to him.

"Let’s not forget Ukrainelet us not lose the memory of the suffering of that martyred people"said the pope at the conclusion of the audience and when four months have passed since the Russian invasion with which the war began, while revealing: "The children who were with me in the popemobile were Ukrainian children.".

Francisco arrived at Saint Peter’s Square aboard the popemobile with the three minors, who accompanied him while he kissed and blessed the babies brought to him by parents or relatives or greeted some of the thousands of faithful gathered.

These are three minors who study in a primary school in Rome, the Alberto Caslolo, which has welcomed them so that they can continue their studies, as explained by the Vatican spokesman, Matteo Bruni. Previously, during the catechesis, Francisco said that "you have to accept" all the diseases that come with old age, as in your case "go in a wheelchair"during the general audience that he presided over in St. Peter’s Square in the Vatican before thousands of faithful.

"Tell me that I have to go in a wheelchair…. But it’s like that, life is like that, with old age all these diseases come to you and you have to accept them as they come, we don’t have the strength of young people", said the pontiff when commenting on a passage from the catechesis, dedicated again to old age and the passage of time. Francis referred to the dialogue on the subject between Jesus and Peter, highlighting the Lord’s warning to his disciple: "When you were young you were self-sufficient, when you are old you will no longer be so in control of yourself and your life. And the testimony of him will also be accompanied by this weakness".

"This conversation between Jesus and Peter contains a valuable teaching for all the disciples, for all believers. And also for all the elderly. Learn from our fragility and express the coherence of our testimony of life in the conditions of a life largely entrusted to others, largely dependent on the initiative of others", said. Old age, she added, "it is also a time of trial, certainly. Starting with the temptation – very human, no doubt, but also very insidious – to keep our leading role. The elderly must not be envious of the young who take their path, who take their place, who outlast them.". The elders "even in the conditions that bring them closer to the farewell of life, they are a title of admiration for future generations and of grateful recognition on the part of the Lord"he added