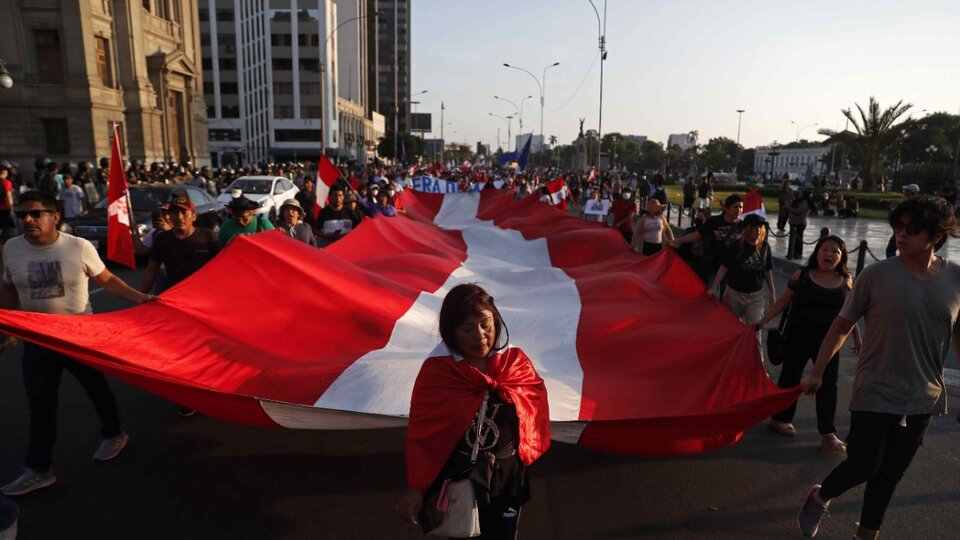 The left opposition would present a motion on Thursday to remove President Dina Boluarte for “moral incapacity” by government repression. There are more than fifty deaths during the anti-government protests that began in December, 46 of them shot by security forces. A two-thirds vote of the 130-member unicameral Congress is required to pass the recall. The support of the right protects from Boluarte.

The protests demanding the resignation of the president reached the US embassy. The demonstrators gathered in front of the diplomatic headquarters, in an exclusive residential neighborhood to protest the support of that country for the government. The “Yankees get out” was heard.

For the seventh consecutive day, this Wednesday there were mobilizations through the streets of downtown Lima, which for a week has become the epicenter of the protests that are shaking the country, which began in the southern Andes. The leading role in the capital is held by the settlers who have arrived from the interior of the country. The demonstrations of these days in the capital ended in a harsh repression with dozens of injured.

In different regions, daily mobilizations and roadblocks continue. Protesters and police were injured in clashes at a blockade picket on the Pan-American highway 290 kilometers south of Lima. The Andean region of Puno on the border with Bolivia — center of the largest protests and repression with more than twenty deaths — was militarized. Hundreds of army soldiers came to this region. The curfew in Puno, which begins at 8:00 p.m., has been extended.

In the midst of the questioning of the brutal repression, the government decided to reward the police with an economic bonus. The amount was not announced. The head of the ministerial cabinet, Alberto Otárola, reported it after leaving a meeting with the president of Congress, José Williams, a retired general accused of human rights violations. The meeting was at the Legislative headquarters. The joint presentation of both before the press was an apology for the repression and they did not accept questions.

With a disastrous death toll from shots fired by security forces, hundreds injured, beatings and arbitrary arrests, Otárola and Williams coincided in praising the behavior of the police, describing it as “very professional” and even “heroic.” “We will request a credit to grant a special bonus for the heroic police”said Otárola, the most visible face of government authoritarianism. “They have it well earned,” said the ex-soldier accused of the massacre of 69 peasants that he now exercises as president of Congress.

The election date is not changed

Otárola unexpectedly arrived at Parliament accompanied by the Ministers of the Interior, Defense and Justice. In the midst of the massive protests that do not stop demanding the departure of Boluarte and elections this year, it was speculated that in the unexpected meeting the Executive would present a bill to Congress to advance the elections for this year and not for 2024. But no. It was like this. The government and the right-wing majority in Congress agreed to defend that the elections be held in April 2024, indifferent to the popular demands and to what the crisis analysts advise. This implies a change of government only in July of next year, dates rejected by the massive mobilizations as they are considered too far away.

The call for elections for 2024 must still be ratified in a second vote after its approval last December. 87 of 130 votes are needed. In the first ballot, 93 votes were obtained. There are leftist congressmen who in December voted in favor of the 2024 elections even with questions, because the right wing that manages Congress left no other alternative. But not approving early elections would have been worse according to the leftist deputies, who insist on elections for this year: this Thursday they would present that proposal in Congress.

The left wants elections before

The left proposes that the elections be in October 2023 and the change of government in December of this year. This option would help calm the social upheaval. But the parliamentary right, where an extreme right in tune with the government predominates, insists on 2024 and intends to block the elections for this year. They are looking for time to make reforms that will facilitate their victory in the next elections, such as trying to control the electoral bodies. Holding elections only next year will complicate the way out of the political crisis. The entire right also refuses to call a Constituent Assembly, another popular demand.

The president at the OAS

Boluarte appeared this Wednesday virtually before the Permanent Council of the Organization of American States (OAS) with his usual double discourse. He said that his administration respected the right to protest and human rights, but in fact it represses them and put into practice a policy that violates human rights. He assured that the deaths hurt him and that the culprits will be investigated and punished. But she and her ministers permanently support the security forces. And she intends to blame the deaths of protesters on the protesters themselves. A couple of hours before making these statements, she once again evaded her responsibility for giving the orders for the repression and for supporting her, while her chief of staff called the police officers “heroes” and announced an economic prize.

Without mentioning them directly, Boluarte criticized presidents who question their government because of the repression. He slipped that these leaders would be supporting violence. The Foreign Ministry expressed its complaint to the Chilean government for the criticism at the Celac meeting of President Gabriel Boric of the repression carried out by the Peruvian government. The Boluarte administration has also clashed with the governments of Bolivia, Colombia and Mexico for the same reason, while becoming isolated internationally. The right presses for him to break with the progressive governments of the region. The delirium of the ultra-right reached the extreme with a statement by Fujimori congressman Ernesto Bustamante, demanding that war be declared on Bolivia and the neighboring country invaded due to his government’s alleged support for the protests in Peru.

Intellectuals and well-known cultural and artistic personalities in the country have launched an international campaign for their colleagues from other countries to record videos to spread them on social networks denouncing the repression in Peru, which they describe as “a massacre.”

This Wednesday The Minister of Production, Sandra Belaunde, resigned, a decision that aggravates the crisis in a cornered government. It is the eighth ministerial change in less than two months of government. Of the seven previously changed ministers, four resigned questioning the government’s bloody repression of the protests.