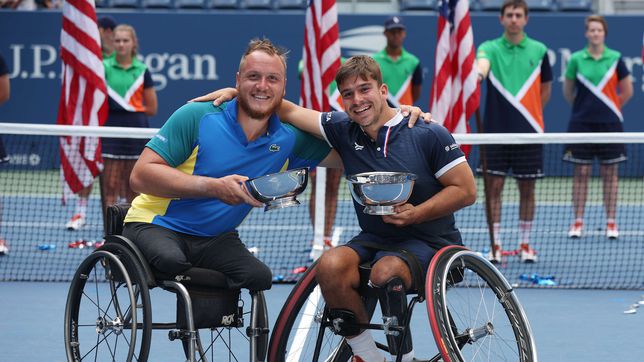 Martín de la Puente (Vigo, June 22, 1999) is the other number one. The Galician and Carlos Alcaraz will close this 2022 at the top of the world ranking. Martín, who reached her in chair tennis doubles, has many things in common with his partner and friend Charlie. “Is a crack. We shared some moments at the US Open. We had the ticket booths in front and he was always there with a smile… We made a great friendship. Then we met again at the reception of his majesty Felipe VI ”, the Paralympic athlete confesses to AS, who this year has crossed off several dreams from his list.

Roland Garros was his first Grand Slam and stayed at the gates of the final along with Dani Caverzaschi. That was the appetizer, then came the binge of triumphs. He won the US Open doubles with Frenchman Nicolas Peifer in September and the Masters with Argentine Gustavo Fernández in November. Hence his number one in doubles. At the individual level he is placed seventh and that has become his great challenge now. “This year has helped me trust myself and believe in what I’m doing.. Without a doubt, it is my best season and it will serve as a push for the next one”, explains the tennis player, before dusting off his memories of Roland Garros, tournament that he arrived driving from the CAR of Sant Cugat del Vallés. He wanted to release his card. He wore the L in the car and in the competition, but everything went smoothly: “That week I freaked out, it’s like when a child goes to an amusement parkwho wants to be everywhere. He made me grow ”.

Martín knows how to deal with pressure. “It’s a privilege to be there, playing for glory. It is within the reach of very few. You have to know how to handle pressure and withdraw, but it is also necessary to explore our limits”, argues an athlete who has had to overcome numerous obstacles. As a child he wanted to play for Celta – he admires Aspas – but the Proteus syndrome changed his plans. This rare disease, which causes abnormal bone growth, ended with the amputation of his left foot at just eight years old. That moment of lifting the sheet was a shock and she had to undergo surgery 15 times in 16 years.

It was his brother Antón —studying at the University of Sacramento, California, with a tennis scholarship— who discovered chair tennis for him.. He was not a crush, but he fell in love little by little. “My brother, my sister and I were going to play at the club. I did it standing up with the fronton, but my physical problems were increasing. At first, the chair made quite an impression on me, I was not expecting such a hulk. I called her a wheeled liner. Chair tennis helped me forget about operations, hospital nights… That came as a coincidence and has become my life. I never thought of living on this. And when I play it’s like the chair disappears. It’s the magic of sport”, explains this child prodigy. At the age of 13 he began to compete and at 15 he won his first national title. He was number one in the junior world ranking and He obtained a diploma in the Rio Games (at 17 years old, he was the youngest of his modality) and Tokyo. Paris 2024 is another of the challenges that loom. “We are going to make people talk”, predicts this Business Administration and Management student.

The next Games may be those of equality. “In tennis, a great job is being done. There is more and more inclusion in ATP tournaments”confirms Martín, who has taken weeks to assimilate this magical year: “I want to reach number one individual. The best victory is yet to come”. Time has given it a reason…

On display with Nadal

Martin of the Bridge played an exhibition match in Chile just a few days ago with Rafa Nadal, Alejandro Tabilo and Gustavo Fernández. Quite an experience. “Historical day! More than 10,000 people in the stadium and broadcast live by the National Television of Chile”, said the Paralympic tennis player in his networks. However, his year is not over yet. There is another date marked in red: “I have the Spanish championship in Seville and from there, to prepare Australia to start 2023 with a lot of strength”.