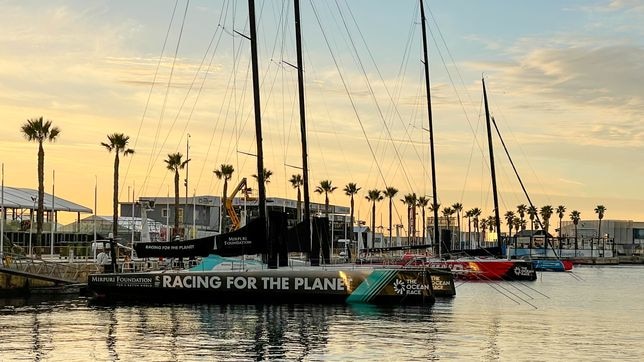 In the world of sport, not only competition prevails. Y The Ocean Race is an example because this round-the-world regatta will be placed next to science and research because, during the nearly six months that it will last, measure microplastic pollution, collect information on the impact of climate change on the ocean and collect data to improve global weather forecasting. The scientific program presented is ambitious, but realistic.

All boats participating in The Ocean Race will carry on board specialized equipment to measure a series of variables along the 60,000 kilometer route, which will be analyzed by scientists from eight major research organizations to better understand the state of the ocean. As they sail through some of the most remote parts of the planet, rarely reached by scientific ships, the teams will have a unique opportunity to collect vital data in areas where information is lacking on two of the biggest threats to the health of the seas: the impact of climate change and plastic pollution.

This scientific program, launched during the 2017-18 edition of the race in collaboration with 11th Hour Racing, will capture a greater variety of data in this edition, including for the first time the levels of oxygen and trace elements in the water will be counted. The data will also be delivered more quickly to scientific partners as it will be transmitted via satellite and will reach organizations including the World Meteorological Organization, the National Center for Oceanography, the Max Planck Society, the National Center for Scientific Research and the National Oceanic and Atmospheric Administration, in real time. Stefan Raimund, Science Lead at The Ocean Race, commented that “uA healthy ocean is not only vital for the sport we love, but also regulates the climate, provides food for billions of people, and supplies half of the planet’s oxygen.. Its decline has an impact on the entire world. To stop it, we must provide scientific evidence to governments and organizations and demand that they act accordingly. We are in a unique position to contribute to this change.”

Many efforts have been put into trying to collect the maximum amount of environmental data during this edition of The Ocean Race and the following stand out:

-Climate change indicators: two boats, the 11th Hour Racing Team and Team Malizia, will carry OceanPacks, which collect water samples to measure levels of carbon dioxide, oxygen, salinity and temperature, providing information on the impact of climate change on the ocean. Elements such as iron, zinc, copper and manganese, which are vital for the growth of plankton, an essential organism since it is the first part of the food chain and the largest producer of oxygen in the ocean, will also be captured for the first time. .

-Plastic pollution: GUYOT environnement – ​​Team Europe and Holcim – PRB will regularly take water samples during the race to detect microplastics. Samples will be analyzed to determine which plastic product the fragments came from (for example, a bottle or a bag).

-Meteorological data: The entire fleet will carry weather sensors on board to measure wind speed, direction and air temperature. Some teams will also drop drifting buoys into the Southern Ocean to continuously capture these measurements, as well as location data, helping to better understand how currents and weather change. Weather data will help improve weather forecasting and is particularly valuable for predicting extreme weather events, as well as revealing information about longer-term climate trends.

-Ocean biodiversity: Biotherm is collaborating with the Tara Ocean Foundation to test an experimental research project to study ocean biodiversity during the regatta. An automated microscope on board will capture images of marine phytoplankton at the ocean surface, which will be analyzed to provide information on phytoplankton diversity in the ocean, along with biodiversity, food webs and the carbon cycle.

Everybody the data collected is open source and are shared with the scientific partners of The Ocean Race, a number of organizations around the world that are examining the impact of human activity on the ocean, and are incorporated into various reports, such as those from the Intergovernmental Panel on Climate Change ( IPCC) and databases such as the Ocean Surface Carbon Dioxide Atlas, which provides data for the Global Carbon Budget, an annual assessment of carbon dioxide that provides targets and predictions for carbon reduction. Véronique Garçon, senior scientist at the CNRS (Centre National de la Recherche Scientifique), stated that “The Ocean Race scientific program is vital for the scientific community and its work to support the United Nations Decade for Ocean Sciences. Data collected by ships from remote parts of the world, where information is scarce, is particularly valuable. Simply put, the more data we have, the more accurately we can understand the ocean’s ability to cope with climate change and predict what will happen to the climate in the future.”