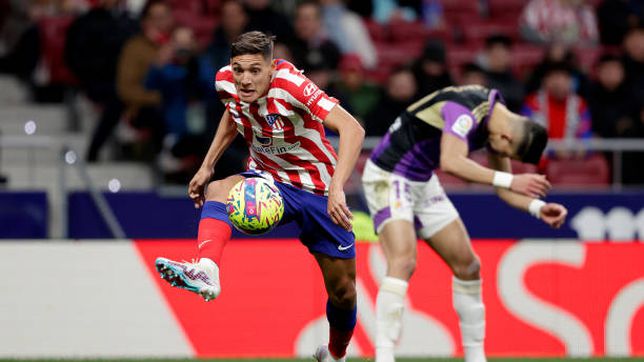 This Nahuel Molina is another. The Argentinian winger has won in Confidence, security in your game, level, daring and significance in recent weeks, after proclaiming himself as World Cup champion being a key piece for Scaloni. That title has strengthened him and has ended what seemed like a mental block that affected his game.

Molina appeared at the Cívitas Metropolitano with a performance far from dreamed of. It was his first game before his audience, against Villarreal on the second day of the League and he left expelled and having given away the goal that broke the tie. A premiere in his new house (he had already played in Getafe on the first day) that affected him emotionally. But Simeone never stopped trusting his compatriot. It was a personal bet, without competition in the position (the only one not folded in the squad) and the coach defended him tooth and nail.

“We loved Molina, I asked for him and insisted that he come. He is the footballer that I understand we need. It is true that from the defensive point of view he has to continue evolving and it will not be the first time that a footballer has come and has to improve a facet. We trust him a lot, he is 24 years old, a very good age to evolve and he will give us a lot of things in the team’s game”, Cholo declared in Leverkusen in the darkest moments for the side. And, now, the perseverance of the coach and Nahuel’s evolution are paying off.

Nahuel Molina has played everything in 2023. The last five full games since his reinstatement after the World Cup (he missed the duels against Arenteiro and Elche for having reached the final). A load of minutes that worries Simeone, but his alternative is a much more decisive Llorente in the rival field. And the winger is already beginning to show the qualities that led Atlético to launch his signing after a fantastic year in Udinese. Against Valladolid, he put a golden cross for Griezmann’s goal. His second consecutive assist after the great shot into space for Llorente who recalled that association with Trippier.

Atlético’s attacks are concentrating on their flank and Molina he was the second rojiblanco player with the most passes completed (46), second only to Koke (60), recovered eight balls, the one with the most of the team along with the always hardworking Griezmann (the Frenchman played only 56 minutes… and Kondogbia recovered seven in just 35 minutes), and he was measured in nine duels, winning 66.7% of them. An increasingly incisive Molina, daring to raise the band and who understands and combines with Llorente, Correa and company. He also seems more comfortable in defense of four, suffering when he has to position himself as a patch in the line of three centrals. The World Cup was a liberation (great goal in the quarterfinals against the Netherlands from Memphis included) and Nahuel is showing a most interesting growth. The footballer begins to demonstrate the reasons for signing him.