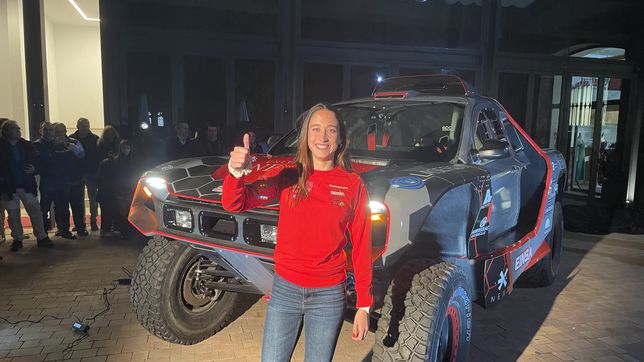 If everything can change in a secondHow much can’t you do it in a week? That has been the time that Manolo and Monica Plaza They have gone from celebrating Christmas at home to doing it in the desert of Saudi Arabia. Father and daughter once again embark on the adventure of the toughest rally in the world, in a way that is as exciting as it is unexpected, which has even prevented Manolo from being present during the presentation of a project that has already experienced its first run before the edition was released. It has been against the clock, because until 30 minutes before they were on vinyl the car that will cross the dunes, but they were finally able to unveil it at the same time that they showed everything work and effort What is behind a prototype that is here to stay?

point to a long term project that it has needed this first year, to be able to add a second, third and those that arise in the future. Maintaining the essence of the Dakar, the presentation alluded to these little big stories that saves the desert race that Manolo and Mónica faced for the first time together when the test landed in Arabia. The girl to whom the accounts did not come out, finally had time to catch his father still with the ambition to compete and together they will seek to finish in what will be his fourth participation (Manolo’s 16th and Mónica’s fourth) in the toughest rally in the world.

Four pillars are to blame for that dream. Nebrija University, SodiCars, Coordinators and the couple that will get into the car, They have been the basis of a project for which Mónica admits that they feel “super lucky”. The downturn that left them on the fourth day of the last edition, when they had to leave after being hit by a truck “throwing away all the work of a year”, was overcome with a proposal as unexpected as this participation. A spare mobile in the camp and all the subsequent work are to blame for the fact that the dream has come true and when Manolo returns from Morocco, it will be time to recover “again the illusion of being able to compete in the Dakar”.