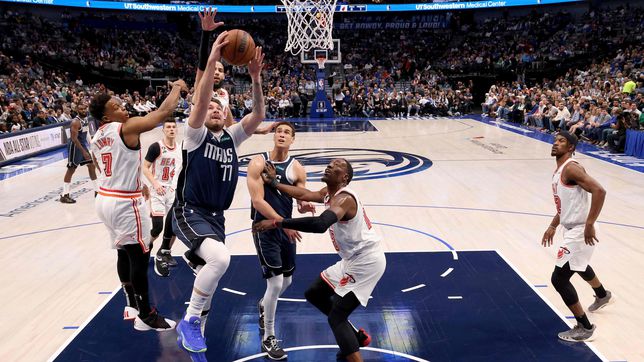 These Mavericks have something of this in their DNA, from their brilliant last season: when everything seems to be going well, they break. When we believe that it’s time to pick up the pieces, they are put together. The Heat visited Dallas in one of the best moments of their not-so-luminous season, for the first time four victories above 50% (25-21). The Mavs received them with three straight losses with at least 130 points against, very harsh criticism from Jason Kidd for his defensive attitude (his thing too in any case, we imagine) and, in total, six losses in eight games after what had been seven straight wins in his best moment of the course. The script that could be imagined, with those precedents, was blown up almost from the beginning. The Mavs played one of their most complete games of the season, the Heat disappeared from the map and (115-90 final) both teams are left with an identical 25-22. Some fifths from the West, other sixths from the East.

The Heat are a very mechanical team, for good at times… and for (very) bad others. When they don’t articulate their game with precision and external percussion, they collapse in a way that drastically distances them from their optimal version, the one that makes any NBA team suffer from the beginning. tongs defenses by Erik Spoelstra. But in Dallas the game of guardsthe creation from the outside in, was non-existent, and a painful 4/20 in triples ended any option in a matter that in this NBA, especially in this one, is pure mathematics: 4/20 against 18/38, 20% count 47%. Both Luka Doncic and Reggie Bullock scored one more triple (five each) than their entire rival. The Slovenian at 5/8 for 32 points, 12 rebounds and 7 assists, perfectly dominant and in his 32nd game of at least 30 points, more than anyone this season. oh and this to close the first quarter:

Bullock finished with a 5/6 and 15 points that he strengthens the recovery of a player who was fundamental last season and who was totally out of the loop in the first section of this In the last four games he is 19/29 on 3-pointers and has turned what was a meager 31% into a, in just four nights, 36% overall. The maths, again. But it is that Dorian Finney-Smith also worked piecemeal, despite foul problems, Dwight Powell and Josh Green. And, with Christian Wood out this time and for the foreseeable future, Spencer Dinwiddie put the finishing touch of talent (19 points) in a convincing, brilliant and based on that defense that was the key to success last year and was causing a headache in recent times. We’ll see where the middle ground is, because no team had stayed at 90 points this season against the Texans, who tomorrow face one of their most intimate enemies West, the Los Angeles Clippers.

The Heat did their part with a null match of its external referents. Nothing from Lowry, hardly anything from Butler and Herro… Oladipo had 20 points and 8 assists off the bench and Bam Adebayo finished with 18 points and 11 rebounds for a team that fed on its points in the zone, in the absence of outside production, Y who added more losses (16) than assists (15).

After sinking (-17) after a lousy start (31-19 the first quarter), a reaction before and after going through the locker room put a -6 that was pure mirage: 92-67 at the end of the third quarter (32-16). Kidd kept Doncic in the first section of the last one, where he usually rests, with the idea of ​​closing the game and giving him the final rest. Without the Slovenian, the advantage reached +30 (110-80) with the Heat totally offside and the rehabbed Mavs, at least for one night. From 40 points for the Hawks in the first quarter of the last loss to 19 for the Heat this time. So, if Kidd wanted a reaction when he whipped out the media, he certainly can smile with relief… at least for this once.

First Duvalier and then Moise’s death worsened the crisis

Dufry and Autogrill complete their merger

TotalEnergies calls on Jean-Christophe Rufin for a mission in Mozambique