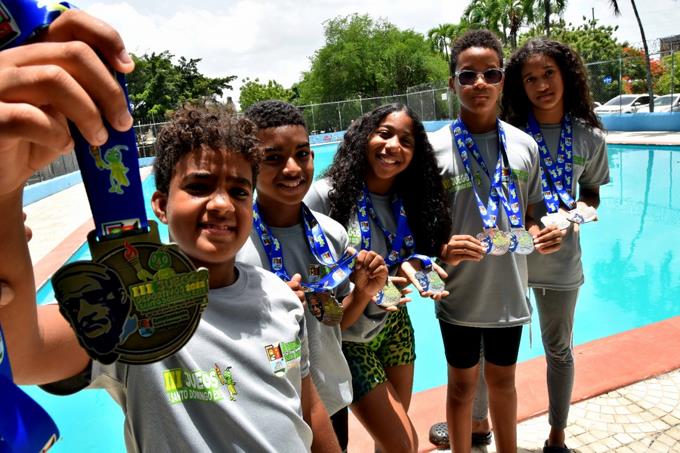 The Los Mameyes team defeated its counterpart from Maquiteria to be crowned the children’s handball champion of the III Municipal Sports Games 2022 organized by the Santo Domingo Este City Council.

The mameyera troop, from Circumscription 1, surpassed their neighbors from Maquiteria with a score of 21 goals to 14, in a hard-fought final match played on the Parque del Este handball court. He finished the tournament undefeated in four matches.

Christopher Ramos carried the greatest offensive weight of the champions on his shoulders, scoring 10 of his team’s 21 goals. Due to the lost cause, with eight goals, Engel de la Cruz stood out.

The champions were led by Franklin Brand, who indicated that the victory is of great significance for his troop, which he said gave himself body and soul to seek the crown.

“The children showed an outstanding strength and assumed a collective commitment, since their goal and that of us, the coaching staff, was to win the gold medal, as indeed we have achieved,” Brand said at the end of the game.

On his side, player Ramos praised the integration and effort of his teammates to win the title.

The meeting was witnessed by the Sports Director of the Santo Domingo Este City Council, Roberto Neris, who chose the progress shown by handball in the community.

Neri led the delivery of trophies and medals to the teams and athletes, accompanied by Héctor Garibaldi, director of engineering and works of the mayor’s office; Junior Santana, director of Youth; Aníbal Arias, technical manager of ASDE.

Raquel Peña, Randy Abreu and Carol Medina are among the athletes who won the gold medal in swimming at the SDE Municipal Games.

Peña, representing District 2, was crowned in the 50-meter butterfly test of the children’s division, with a time of 49.50. Alexa Casanova and Nashla Pujols won the silver and bronze medals, respectively.

Abreu was the champion in this same category and event, but in the male branch, where he made a time of 42.90 and beat Andy Nina and Justin Familia, owners of second and third place in the event.

For his part, Medina won the 50-meter butterfly in 13-14 years. She clocked 45.51 and beat Arisleidy Pujols and Liz Rosario.

Daniel Bounnet won in the male branch with a record of 44.00. Jhonatan Hidalgo won the silver and Michael Robles the bronze.

Casanova won the 50-meter freestyle in his 11-12-year-old category, as did Andy Nina. Medina and Hidalgo prevailed in 13-14 years, and Montes in 15 years and more.

The Sagrada Familia team left its pair of Los Trinitarios lying on the field, in one of the matches of the ASDE Municipal Games baseball tournament.

Sagrada Familia won with a tight score of two runs to one.

In another match, the Guerreros de Los Mina also left Mendoza’s team on the field, beating him 7-6.

The actions in the baseball of the Municipal Games continue on Sunday with several games, starting at 9:00 in the morning.

In the karate tournament, the boy Isandel Elías Agramonte de los Santos won the gold medal in the seven-year division.

The athlete of the Diplomatic Ladies club was awarded by the senator of the Santo Domingo Province, Antonio Taveras Guzmán, who highlighted the child’s courage and competitive quality.

Italy will always have Argentina… and Spain